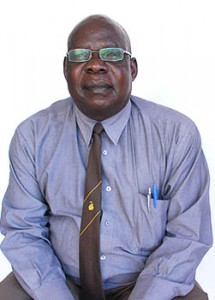 Audio clip: Adobe Flash Player (version 9 or above) is required to play this audio clip. Download the latest version here. You also need to have JavaScript enabled in your browser.

HERMANN ANDROGA AWOLA is a member of the Madi tribe and fled from Sudan to Uganda with his family in 1989. When crossing the border they were chased by the Ugandan army and their belongings were taken. Hermann used his entrepreneurial skills to start a school and bred cattle there.

After the death of two of his children in Uganda, Hermann went to Kakuma refugee camp in Kenya where his daughter died. He migrated to Australia in 1998 with his wife and one remaining child.

Hermann has completed a social science degree and masters in education here in Australia, adding to the degrees he obtained in Africa. He worked as a Catholic school teacher until 2005 and 2006-08 was employed by the United Nations Children’s Fund (UNICEF) to work in Africa managing education projects. He currently works as an interpreter.

The town [in Uganda] was very bad, soldiers were looting. … We had to run with only the clothes on our bodies. … Everywhere they were shooting. … Someone was shot dead for a radio. … Survival became a problem, food became a problem … we found cassava roots to eat. Where to sleep was a problem.

We lost everything – parents, relatives, children; the situation is painful. I was a project manager … educating teachers, supplying materials to schools … capacity building. Coming to Sydney wrecked my job opportunities.