Melbourne, then Albury from 2012

I completed my Diploma of Nursing and am now working in Albury in aged care.

My English name is Jake but that is not my real name, my real name is Yong Qiang. Yong is my surname, it means brave and Qiang means strong, but I’m not so strong, neither brave.

I grew up in a remote area of China. It’s literally called ‘New Territory’, in China’s Xinjiang [Province]. I was a very active boy, always engaged in playing sports: taekwondo, nunchucks, kung fu, and stuff like that, so I was very active. I’m the only child in the family, mainly because of the one child policy in China. My mum used to be nurse and my dad used to be a vet in the chicken farm, because he used to own the chicken farm so he was the vet too.

I grew up in a remote area of China

The little town I grew up has a little lake, like Albury, it has very good memories for me. I went swimming you know every now and then, but my mum she was crazy about that because a lot of people just die, simply drowned. [But the swimming is a] very fond memory for me and also the competitions I went to, taekwondo and kung fu, and any sports meeting in the city. That was very good, brotherhood if you like. 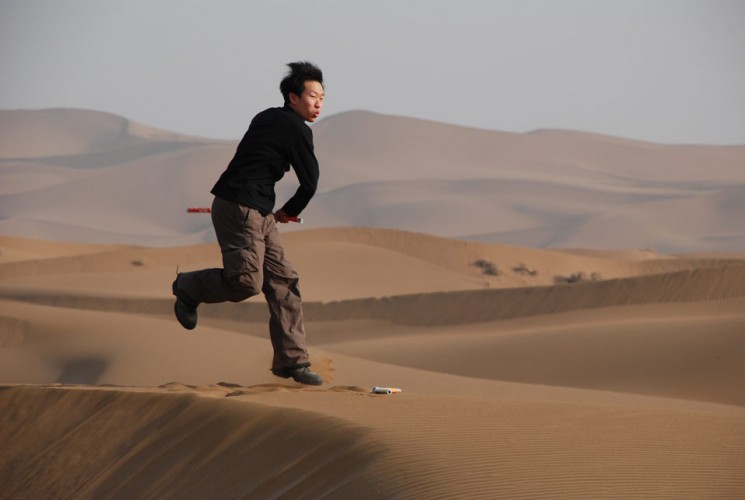 My education was very standard. I started when I was six, [but] it was too early [when] I studied Year One and I was too little. So I actually repeated Year One and that was very frustrating for me. That made me not really confident at the beginning of my life. And then in about Year Four, I joined the school sports team, doing sprinting and all that, so that gradually built me up, so that I regained my confidence as a child.

I joined the school sports team, so I regained my confidence as a child

Then I moved to a big city when I was 13. I studied in the number one middle school in the town. It was very competitive, but I wasn’t competitive, so I was withdrawn from the study, and I didn’t finish high school. I then went straight to university because my father knows the principal ‒ so I joined the university without the examination, basically took a shortcut!

Then I studied business management, and I tried to open a restaurant. I started in 13 different locations and none of them worked well for me. Then in 2001, I re-entered university, did my Bachelor of Economics and then I did translation and interpretation for a start and opened my own English school with my wife.

Dating back, the first incident to spark the idea to come to Australia was marriage. At the point you know you have to think about your relationship seriously with a girlfriend. You have to think what do you want to do with your life and her life too and a baby in the foreseeable future. So at that stage we’re thinking about marriage, we’re thinking about our livelihood in the future. That was early 2009, then we arranged marriage for 1st of May, which is Labour Day in China. We get married, we had a very big banquet. Since then we determined to immigrate to Australia, or try to at least at that stage.

I heard it is big country, and it is a big country, and everybody speaks English, and people are friendly too, that is what I heard. The process was very interesting for me because it is a re-education in itself. I came prepared if you like, I did study some technical skills so I went back to school to study how to do massage, and how to teach Chinese as a second language, I studied translation and interpretation because I have experience in that area. However that is not the way you can get into immigration, you have to study the policy. So I did study the policy a lot and then changed my [focus on to] nursing so I joined the nursing. Now I’m a nurse in an aged care facility. I think the journey is an education itself, just learning a different culture, learning the system, learning what you can do for another country.

I think the journey is an education itself

The journey for us to come to Australia was very interesting again, it’s a bit out of control, we don’t know what’s going to happen. It is a very intense anxiety. We don’t know when we can get the visa, then the second day we got it, just like that. We don’t know why, but we got it. Then we brought a ticket, but at that time the region we used to live in was very politically charged with tension between different ethnic groups so we cannot make international phone calls from the region, we cannot use the internet. So we were basically being isolated from the world.

We cannot actually contact to find our accommodation, so what we did we bought a ticket to Shanghai and used the internet in the little motel and it cost $300 dollars to make international phone calls to find our first accommodation. So that was very interesting, that was a journey for us. That was on 7th August 2009. Then the first day when we set foot on the wonderful land in Melbourne, Tullamarine International Airport, was 8th August 2009. For Chinese number 8 is a lucky number, so maybe that is where our luck started.

My first impression of Melbourne is not so impressive. It is not so international, it is very clean and people are very friendly although not so many people around, that’s our first impression. Second impression, there were too many Chinese, so was not a very good impression for me. I was expecting so much to see a different world but now it’s kind of similar. But in a way, later, I realised that it’s a pretty good thing for me. It was not too much culture shock as such.

I was expecting so much to see a different world

By the time I finished my second study, which was a Diploma of Nursing, I was waiting for my registration of nursing, when I was offered work but the only condition is go to Albury. I had never heard about Albury, I don’t even know where Albury is. So I did my study on the small town and said ‘OK’. The whole experience of Australia is an adventure and we’re now extended to Albury, so here I am. I have to stay for two years for the contract. But by the first month of the contract, I started in 2012, 19 March 2012, so a month through the journey, I found this is a very nice country actually and later on, probably the end of 2012, I discovered there is a lake, so that was very good. I really discovered the beauty of this small country. 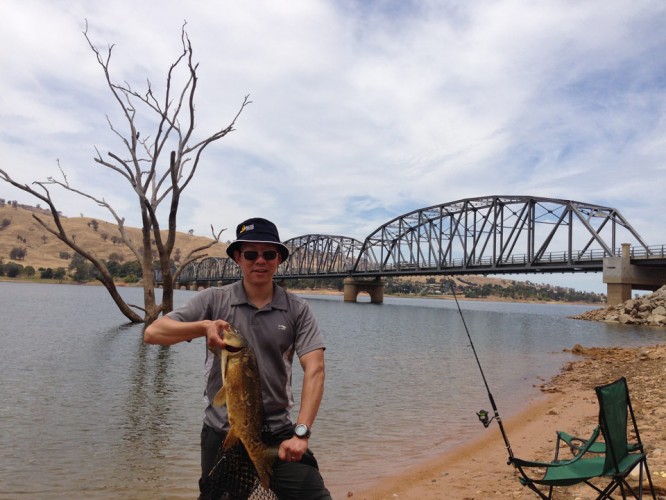 We brought some things to prepare for our journey in order to get out permanent residency. So for me I brought a lot of digital equipment and devices. I brought a lot of computers, a lot of hard drives. I would like to say that I’m a new generation of Chinese, I believe in technology. So the hard drive is everything. All the memories in terms of people, events, they can all be stored on a piece of hard disk. And that’s why I brought everything. I had four big ones and two smaller ones, to store all my life basically. 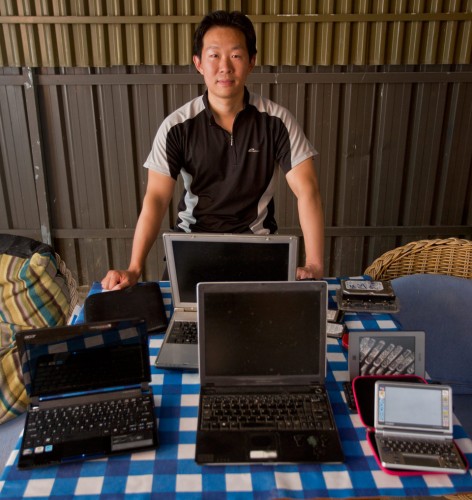 And I brought my nunchucks because I can at least practise. That’s my way to connect to my Chinese roots. There was a guy who influenced me on my martial arts journey. His name was Bruce Lee. You’ve probably seen that he’s our doorman too, we’ve got a little stature of him by the door!

When I was 13, I watched the film ‘The Way of the Dragon’ and so I learnt nunchucks. I practised a lot and bumped my head a lot. My mum used to practice with me and then she bumped her head. And the bumps [lasted for] about a month but I never really quit even though I got a lot of bumps on the head. So I practised since I was 13 and now I’m 33, so I’ve practised for 20 years. Every day I’ve learned new things with my nunchucks. I’ve learned that it’s a perfect way to practise yourself, and a good way to know who you are and where you come from.

Because I taught a lot of students and did a lot of kung fu, and did a lot of teaching English, that gave me the opportunity to become a 2008 Olympic Torch Bearer in China in the region. That was my shining moment of my life. I brought my registration papers but I left my Olympic torch to my father-in-law. That was my gift for him. It was a very expensive gift, memorable too. A gift for him to keep for my children in the future.

That was my shining moment of my life

I brought my certificate with me. This certificate of the 2008 Olympic Torch Bearers was issued by the Chairman, the Mayor of Beijing, and he was the Olympic organising committee chief organiser. So he personally issued each of the certificates to the individual torch bearers. The process to be nominated to become a torch bearer was very serious. I don’t know why I was elected. It was just pure luck on my part, just luck. Basically one out of a million, so the lucky one out of a million 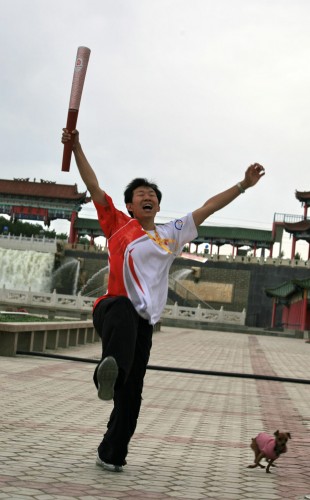 Jake as an Olympic Torch Bearer in 2008

There was a lot of audience to watch you do it. And you know that the audience came from the registration rather than free spirits. But you can see a lot of people outside the big perimeter, that there are a million of them to watch, and that’s a lot. And there was a live national [broadcast], so that’s 130 million people watching at the same time, so that’s very exciting. I lost my voice! It’s a very short journey too. You only have 60 metres to run so you have to go very slow. I was very lucky. I had about six students of mine there and they recognised me, so they shouted out ‘That’s my teacher!’ So it was a very personal experience too. 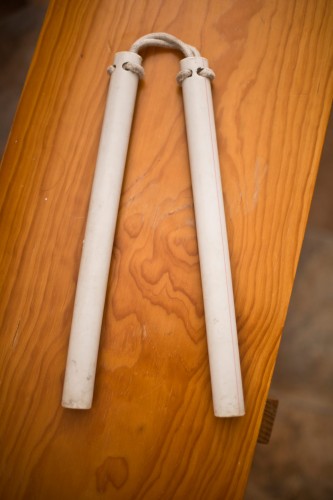 ‘I brought my nunchucks, because I can at least practise, that’s my way to connect to my Chinese roots.’ 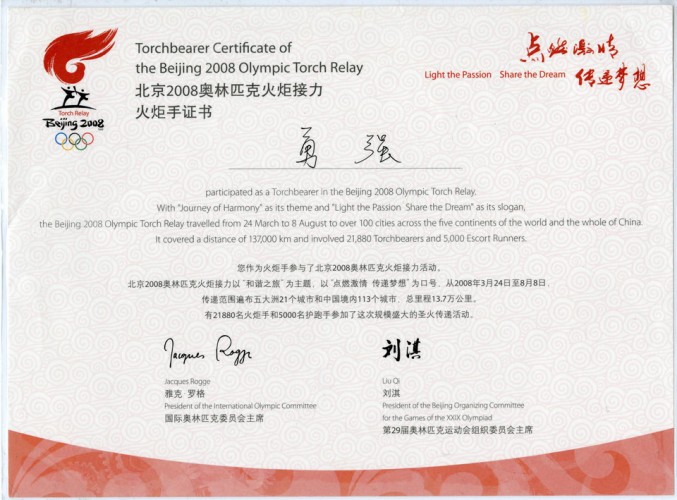