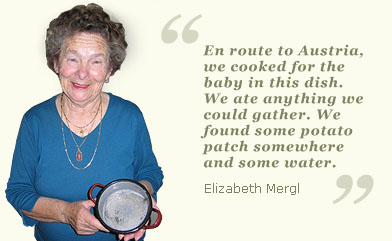 Today, four out of every ten people in New South Wales are either migrants, or the children of migrants.

Most would have arrived in the decades immediately after the Second World War when the Australian Government actively pursued a policy of ‘populate or perish’.

Belongings tells the stories of some of these people through personal mementos, photographs and memories. Some are treasured objects brought from the ‘old country’; others are souvenirs of the journey out; or keepsakes from their first home or job. All help us understand how migration changed their lives and – through the cultures and traditions they brought with them – the lives of all Australians forever.

For 150 years following European settlement, government policies ensured that the majority of Australia’s immigrants were of European origin and preferably British. When the colonies federated in 1901, the first act of the new parliament was to pass the Immigration Restriction Act. By introducing a dictation test, this ensured that ‘undesirable’ non-European migrants were prohibited from entering Australia and preference was given to British migrants .

Only after World War Two and the near invasion by Japan did Australia look to the rest of Europe to ‘populate’ the empty countryside and build up an industrial work force. In 1945 Arthur Calwell was appointed the first Federal Government Immigration Minister and set about putting policies in train that would attract over 70,000 migrants a year. At most only half this number could be met from Britain. In 1947 the Australian Government therefore reluctantly agreed to accept ‘Displaced Persons’, or refugees, from the war in Europe. Over the next five years nearly 171,000 – mainly from Poland, Yugoslavia and the Baltic States – arrived. When this source of migrants was exhausted, the Government signed formal agreements to sponsor migrants from a number of European countries including Germany, Italy, Greece and Malta.

Under these ‘assisted passage’ schemes, migrants were given temporary accommodation in exchange for guaranteeing to provide two years labour on government projects such as the Snowy Mountains Scheme. Almost 40 accommodation centres were established in New South Wales, often in old army barracks. Families were separated with husbands living in barracks close to their work and women and children staying behind in the migrant accommodation.

Conditions were, at best, basic. Other migrants arrived unassisted and lived – some in comfort, others not – with family and friends, and found work independently of the Government.

Between 1945 and 1975, Australia’s population almost doubled. Almost three million migrants arrived, half from Britain and half from other European countries. However it was not until the election of Gough Whitlam’s Federal Government in 1972 that the ‘White Australia’ policy was finally abandoned. The Immigration Minister, Al Grassby, declared in 1973 that ‘every relic of past ethnic or racial discrimination’ was to be abandoned and migrants welcomed from all countries. By the 1996 Census, the Australian population had reached 18 million including 5.6 million people who had immigrated from over 150 countries.

Belongings provides an opportunity to read some of their personal experiences and gain an understanding of the difficulties, challenges and rewards of migration.