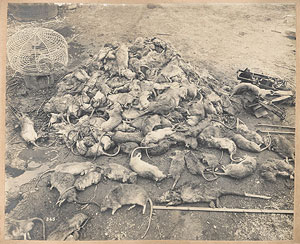 Bubonic plague broke out in Sydney in 1900 and soon spread to other Australian states. In seven months, 300 people caught the disease and 100 died. The disease came to Australia on ships from other countries, so the area around Sydney’s docks was quarantined: people could not move into or out of the area. The plague was spread by rats so the government introduced a rat bounty to encourage their capture.

In January 1919, a worse epidemic broke out. The Spanish Flu, brought to Australia by soldiers returning from World War I, killed millions of people around the world. Between 1919 and 1920 it killed more than 11,500 Australians. Fortunately, the Government was prepared and was able to stop the epidemic from spreading. Public health measures were introduced and an infectious diseases hospital was set up at Long Bay in Sydney. Quarantine stations were upgraded to quarantine and treat migrants and sailors suspected of carrying the Spanish Flu and other diseases. 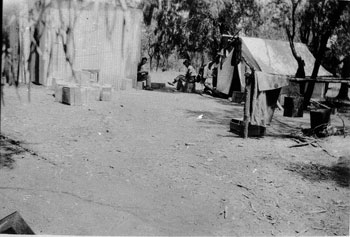 As soldiers returned home from World War I, many found there were no jobs and places to live. The Government believed the soldiers deserved something for their war sacrifice and set up the Soldier Settler Scheme. State governments provided land for soldier farms and the Australian Government provided funds to get them started. In New South Wales, most of the land was in the Riverina district, ironically an area that had large German communities before the war. Some soldier settlers did well, most did not. Over 37,500 took up farms, but by 1929 almost half had given up and left their land. The main reason for failure was their lack of farming experience, coupled with a long drought and falling prices for farm products. Italian migrants brought farming knowledge and practices with them, introducing irrigation and winemaking to the Riverina area and turning the abandoned farms into successful businesses.

In the 1920s, the Australia Government was keen to develop regional areas. Prime Minister Stanley Bruce considered there were three things necessary for this: labour, money and markets and for these Australia depended on Britain. British migrants were encouraged to settle in Australia. The government paid most of their fare and, like the soldiers before them, some were assisted to establish farms. Unfortunately, also like the soldier settlers, they had come from urban areas and had limited or no experience in farming. As a result they failed and many abandoned their farms. They were told they would do well in Australia, but they were not told about the problems they would face, like finding a job, a home and settling down in a new country. About 212,000 migrants came from Britain and most ended up in cities. 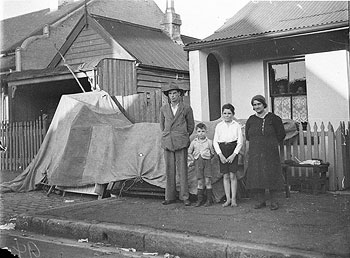 An original Anzac, and his family evicted from their Redfern home into the street during the Depression, William Roberts, 1929, DG ON4/870, Mitchell Library, State Library of New South Wales

The Government needed substantial sums of money to fund these programs, as well as to pay for war pensions and the Soldier Settlement Scheme. It needed capital to build railways, roads, schools and hospitals and to supply houses with electricity and water. It needed money to pay the interest on the loans it had taken out during World War I. During the 1920s, the Australian Government borrowed heavily from British banks.

In the 1920s, the United States and Britain were the world’s largest investors in overseas projects. By 1930, the United States stopped investing in other countries, demanded that other countries repay loans owed to it, put up high tariffs on imports and cut back on imports. Britain owed the United States a fortune in loans and called on Australia to pay back the millions of pounds it had borrowed from it in the 1920s. But Australia had no money either. As people lost their jobs, they could not afford to buy goods or pay taxes. It was mainly the unskilled workers and their families that were hit hardest and this included the recently arrived migrant families who were already finding the going tough. Shantytowns sprang up at Blacktown, Sans Souci and La Perouse. People vowed this would never happen again and the Australian Government took over social welfare in the 1930s.

This economic disaster encouraged people to join political organisations that promised solutions to their problems. In New South Wales two of these were the Australian Communist Party and the New Guard. These groups reflected the rise of communism and fascism in Europe and their ideas came to Australia with migrants. Many of the organisers in the trade unions were migrants from northern England and the intellectual left in Australia came from German Jews migrating from the persecution of the Nazis in the 1930s. Most of the New Guard were ex-soldiers from the Great War who saw solutions in militarist terms. They wanted a strong government to take charge and round up troublemakers. Some New Guard branches took the black on red swastika flag of the German Nazis as their symbol.