Contributed by Noah Muscat. This story is part of a collection of stories from the Skola Maltija’s Maltese Migration Projects From Malta to Australia.

An interview with my uncle Christopher Abela about his journey from Malta to Australia.
By Noah Muscat 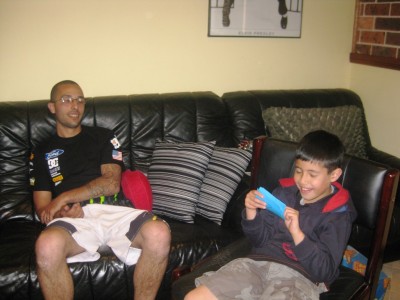 1. Christopher, where did you live in Malta?

I lived in Mgarr, Malta with my family. We lived about a half an hour walk to the sea. In the village square there was my school, the Mgarr church, and the police station.

2. When did you leave Malta?

3. How old were you when you left Malta?

4. Christopher, why did you migrate to Australia?

I came to Australia to be with the love of my life, your Aunty Joyce. If it wasn’t for her I wouldn’t have came here. (Joyce and Christopher met each other when Joyce went to Malta for her nannu’s funeral in May 2008). I am happy to be in Australia as there are more opportunities here.

5. How did you travel here?

I came by plane, Emirates business class with your Aunty Joyce. Before I got on the plane I was scared and nervous because it was my first time on a plane and it was a very long flight. I didn’t realise how long it was going to take and I got bored, but the trip was good because I had a good sleep. We stopped at Larnaca to refuel and stayed in Dubai overnight before we arrived in Australia. When we arrived we lived in Joyce’s family home. It was situated on five acres in Calverts Road, Orchard Hills.

6. What was your first job in Australia?

My first job was as a labourer, repairing and making pallets.

7. Is there anything else you would like to tell me?

I would like to go back to Malta one day to see my family again as I only have distant relatives that live in Australia and to have some pastizzi as the pastizzi here isn’t as good as the Malta ones. However, I am very glad I migrated to Australia.