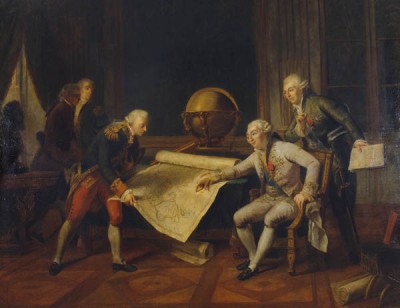 The arrival of Captain James Cook’s HMS Endeavour in 1770, the British First Fleet and the Lapérouse Expedition in 1788 would have sent shock waves through the Botany Bay clans. Like Cook before him, Captain Arthur Phillip sought to have peaceful relations with the local population. He wrote:

With respect to the natives, it was my determination, from my first landing that nothing less than the most absolute necessity should ever make me fire upon them…
Phillip Journal, 1788.

But as the newcomers disrupted the existing order of things, conflict was inevitable. Neither group understood the other as Newton Fowell from the HMS Sirius noted:

… they speak very loudly and mostly all together very often pronouncing the words Worra, Worra Wea and seemed quite surprised at not being answered…

In 1784 King Louis XVI of France commissioned Comte de la Lapérouse to explore the Pacific as no one had done before. Cook’s charts were used and the Lapérouse expedition is one of the great voyages of discovery. On 1 August 1785 Lapérouse departed Brest, France, in command of the frigates L’Astrolabe and La Boussole.

After extensively mapping the coastlines of North America, Japan, Korea and Siberia, Lapérouse was directed to go to Botany Bay to observe the founding of the British Colony. On 26 January 1788 the French arrived at Botany Bay just as the British were leaving for Port Jackson. Contrary to popular myth, the French did not have orders to claim Australia for France.

We spent the whole of the 24th (Jan 1788) plying in sight of Botany Bay, but that day we had a spectacle; this was the British Squadron at anchor with their pennants and ensigns which we could plainly distinguish.
Lapérouse Journal, 1788.

The French stayed at Botany Bay for six weeks and built a stockade, observatory and garden. On the journey to Botany Bay there had been a skirmish with warriors in Samoa in which 12 of the crew were killed, including Langle, commander of L’Astrolabe. Father Reçeveur, the expedition’s naturalist and chaplain, was injured and he died at Botany Bay. He was buried at Frenchmans Beach. Reçeveur was the second European to be buried in Australian soil; the first was Sutherland from Cook’s 1770 expedition who was buried at Kurnell.

The last official sighting of the French was in March 1788 when lookouts at Port Jackson saw the expedition sail from Botany Bay. The expedition was wrecked on the reefs of Vanikoro in the Solomon Islands during a cyclone in April or May 1788. The fate of the expedition was to remain a mystery for nearly 40 years until 1826 when Peter Dillon, an Irish trader from Sydney, found the wrecks of the expedition. Since then many artefacts have been retrieved from the site.

Obed West in his 1822 account The Bays of Sydney documents meeting an Aboriginal elder called Mahroot in the 1840s who as a young boy, witnessed the Lapérouse expedition’s camp at Botany Bay and the pox that erupted shortly after their departure. In 1789 people refused to return to La Perouse for the fear of the pox and set up what was referred to as the ‘blacks’ hospital’ at Little Bay. Here the sick and dying were isolated and brought provisions of fish and water.

Well Mister… all blackfella gone! All this my country! Pretty place Botany! Little piccaninny, I run about here. Plenty blackfellow then: Corrobory: Great fight: All canoe about. Only me left now…
Mahroot c.1845