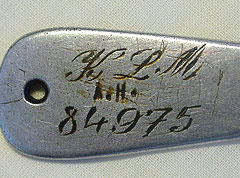 My name is Arthur Hill [pseudonym]. I was born in Boryslaw, Poland in 1920 of Jewish parents. I had three sisters who along with my mother were lost during World War Two. I myself spent years in Nazi concentration camps in Poland and Austria.

I have kept this small aluminum spoon – it was the one I ate with at Plaszow concentration camp and later at Mathausen concentration camp. One German, a kind fellow prisoner at Plaszow, gave me the spoon. It had a hole in the top through which I put a string and tied it around my neck so I wouldn’t lose it. It is worn from use and engraved on one side is my name and the camp liberation date in May 1945. On the other side of the spoon is my identity number at Plaszow.

I kept the spoon during those years while I was in Plaszow and Mathausen because if I lost it I would have to use my fingers to eat. I have kept it in the years since then because it holds the memory of that time for me. Here is the story that the spoon holds in my memory, the story of my experience of the war and coming to Australia. I went through a lot, I tell you.

I was 18 in 1939 when Nazi Germany invaded Poland and I had just finished my trade training as a toolmaker.

I was 18 in 1939 when Nazi Germany invaded Poland and I had just finished my trade training as a toolmaker. I had studied my trade in Lwow [Poland] from when I was about 15 years old. After getting my trade I returned to Boryslaw to live with my mother and sisters. I was the youngest child in my family and I had three older sisters. My middle sister became ill with tuberculosis and later died in Lwow and was buried in the Jewish cemetery there. My older sister no longer lived at home as she had married a chemist. She wrote us a letter telling us she was alright but we did not ever hear from her again.

During the war my youngest sister and mother went into hiding in Breslau [Germany]. I was put to work for German soldiers at a stable yard there. It was while I was working that the Nazis started taking away Jews and sending them to camps. One day my mother and my sister were discovered in their hiding place and were taken to the railway to be shipped off in animal rail wagons to a concentration camp. Because I worked for the German soldiers I came to know one of them quite well, he offered to help me find my mother and sister if I introduced him to local girls. He took me to the railway station to try to get my sister and mother off the train. We went to each of the wagons asking for them but I could not find them.

Here again, because I was healthy, I was set to work in the crematorium. It was terrible work…

I was also sent to a camp. Being young and healthy I was sent to Plaszow, a labour camp in Poland. Later I went to Mathausen camp in Austria. This camp was an extermination camp. Here again, because I was healthy, I was set to work in the crematorium. It was terrible work – 12 hour shifts during which we had to burn the bodies of those who died at the camp. Everyone who did this job knew it would only last for a limited time because after about six months the Germans killed the crematorium workers.

He warned me I did not have much longer to live and that he wanted to help me find a way out of this situation.

One night while I was working in the crematorium a high-ranking German officer beckoned to me. He ordered me to follow him out of the building. I thought I was going to be killed. When we were behind the building he started speaking to me in Yiddish. I was shocked; a German soldier speaking the Jewish language! He warned me I did not have much longer to live and that he wanted to help me find a way out of this situation. He told me to meet him at the end of his shift the next night and to take the identity number of one of the last people I put into the crematorium. He ordered me not to tell anyone about what he was doing. He said if I did he would tear me to pieces.

I believe he was a Jew who had hidden his identity and became a German soldier.

I was terrified and I did not really believe he would follow through with this plan. He was taking a huge risk in helping me. I believe he was a Jew who had hidden his identity and became a German soldier. Anyway he turned up the next night with a jeep and some civilian clothes for me. We travelled to Ebensee in Austria, to a large German tank factory. At the factory, the officer had to convince the German guards that I was a non-Jewish prisoner and skilled tradesman assigned to operate the factory machinery. It was a frightening experience; I had to stay close to him and say as little as possible. At one point a group of guards, high-ranking German soldiers, ordered me to take off the huge coat I was wearing so they could inspect me properly. Luckily I had the identity number I had stolen from the dead man at the crematorium so they thought I was an ordinary prisoner and not a crematorium worker and a Jew.

When I was put to work in the factory I was shocked for although I was a toolmaker and tradesman I had never seen an automated factory such as this one. German soldiers guarded us at gunpoint watching over everything we did. When the foreman ordered me to start the machinery, I made a mistake and pressed the wrong button. The foreman immediately struck me to the ground and yelled at me. When he pushed me to my feet he secretly showed me his Communist identity card so I knew he was a friend. He apologised for hitting me and explained that he had to do it to make sure the guards did not suspect my story and discover that I was a Jew who had effectively escaped from Mathausen. He showed me how to operate machinery and whispered that the war was almost over.

I was one of the 12 prisoners who survived the bombing.

I worked there for another two weeks or so when the factory was bombed. I was one of the 12 prisoners who survived the bombing. We were trapped in the ruined building for three days before the Americans came.

One day I got a phone call. It was my aunt. She and her family had left Poland before 1939 and were living in England.

After five weeks recovering in an American hospital I was sent to the [Displaced Persons'] repatriation camp in Nardo, Italy. One day I got a phone call. It was my aunt. She and her family had left Poland before 1939 and were living in England. She traced me and said she was going to Australia and asked about my mother and sisters. When I said they were gone she told me to forget it, put it out of my mind and start a new life. I ask you, how can you put that out of your mind?

After Nardo, I was sent to another repatriation camp – at Lecce in southern Italy. Here I met a Hungarian woman, Lilly, who would become my first wife. My aunt sent the papers for my immigration to Australia and after a lot of talking I finally convinced Lilly to come with me. We left from Naples on 7 September 1947. We sailed on an American troop ship and first went to San Francisco. I can remember this ship was full of American soldiers who had married girls in Europe. We then sailed on the Marine Lynx from San Francisco to Australia. It was a good trip although even married women and men were accommodated in separate sleeping quarters. We arrived in Woolloomooloo in early October 1947. My aunt and my cousin met us at the wharf.

My aunt lived in Maroubra, Sydney and Lilly and I lived there for a little while.

My aunt lived in Maroubra, Sydney and Lilly and I lived there for a little while. After we found work, Lilly at the Texta shirt factory in Elizabeth Street near Central station and me at a factory in Auburn, we were able to get our own place in Maroubra. Much later I bought this flat here in Randwick.

Over the years we settled in. I got a job as a toolmaker with Marner Engineering and was there for 17 years. When I first worked for them they had a workshop in Elizabeth Street, Sydney and then they moved to Rosebery. It was my cousin who helped me in that job. When I first arrived he helped me learn English and the technical terms I needed to know as a toolmaker.

In the early 1960s Lilly and I bought a small grocery shop in Bondi which she ran during the day.

In the early 1960s Lilly and I bought a small grocery shop in Bondi which she ran during the day. I helped keep the place stocked by picking up supplies from various warehouses after work. It was very tiring I can remember. We sold milk, bread and biscuits as well as specialised food items that our predominantly Jewish customers liked. Lilly did not like keeping the shop too much. You see she was a sophisticated woman – she had been a singer and entertainer in Europe so while we made a good life here it was very different from our old life. She felt tied to the shop so after three or four years we sold the business. Later Lilly got a small tobacconist kiosk business in the city in Bathurst Street. This she liked much better.

And the officer who saved me? I don’t know why he did it and I tried to find him after the war.

Even though I have had a good life here, I know the time in Mathausen has taken a toll on my health and my peace of mind. I lost everybody during the war, I will always miss my mother and sisters. The spoon that I had in the camp – it keeps the memory of that time for me. And the officer who saved me? I don’t know why he did it and I tried to find him after the war. I spent a lot of time and money because I wanted to thank him and maybe help him out. But I was never able to trace him.

spoon used for meals in WW2 concentration camps (front)
“I kept the spoon while I was at Plaszow and Mathausen because if I lost it I would have to use my fingers to eat. I have kept it because it holds the memory of that time for me.” Photograph courtesy of Sydney Jewish Museum