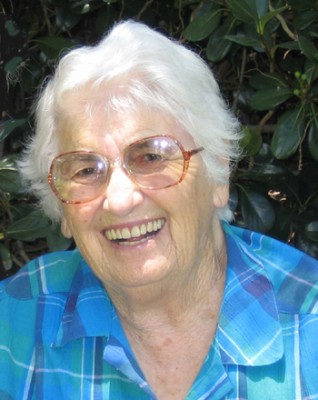 My husband was a psychiatrist in Melbourne.

My husband later became the first Professor of Child Psychiatry in Australia at Sydney University whilst I kept the home.

I met my husband when he was in the army in the small town of Potchefstroom [in South Africa] during the [Second World] war. At the time I felt that I had no life at all. I struggled with my mother and I didn’t like the local boys and so didn’t go out with them. If I hadn’t met Julian I imagine I’d have never left the town. My life began when we married in 1946. I was 31. We were married for almost 56 years.

I went to Johannesburg one week and never went back home. And that was the best thing I did in my life.

I remember our courting went on for many months. My mother didn’t want me to leave her and every time Julian invited me to Johannesburg where he was living, my mother was cross with me. I didn’t take any notice and would stay with my sister. She never thought he’d marry me. He was already a doctor. Eventually we spoke about marriage and I went to Johannesburg one week and never went back home. And that was the best thing I did in my life.

My husband, Julian, went on to specialize at the Tavistock Clinic [in London] under the famous child psychiatrist, John Bowlby. I had never travelled anywhere. My very first trip was to London where we stayed for nearly five years and our first child, Bernice, was born. I had to learn to find my way on the buses and trains which I found very hard at first. After a few months I could do everything.

When I was due to give birth I was surprised that even though Julian was a doctor, he was not allowed to stay with me. He left me at the front door and was told to phone up during the day to hear when the baby was born. He was then allowed to visit me for brief periods.

When Bernice was about five, I became terribly homesick. And much against Julian’s wishes we went back to live in Johannesburg where our two children, Hazel and Lyndall, were born. By the time my third daughter was four years, Julian had had enough and said, “we’re getting out”. He was strongly against the government and the apartheid system. He didn’t want our children to be brought up in South Africa.

We packed up our entire house; all our furniture and even our car.

With my three children, I felt secure and ready to travel again. I was quite happy to go anywhere with him. He tried to find another job in London but couldn’t. They recommended he apply for a post in Melbourne, which he achieved. Our relocation was paid for by the hospital there. We packed up our entire house; all our furniture and even our car came with us on the boat. We were extremely well taken care of.

We travelled over on the Dominion Monarch on the Shaw Savill shipping line. The men and women were separated and the three girls and myself shared one cabin which was rather cramped. Julian was on the other side of the boat and used to come and visit us. I remember cutting lengths of crepe paper for costumes for the girls, for the big fancy dress party held on board. I think the trip took about two weeks. I still have our actual tickets and the suitcases we used.

Julian had written to a good friend from his army days, Jack Guild, and when we arrived in Melbourne, the entire Guild family was waiting to meet us. They had two daughters and in the following weeks, at least one member of their family came to visit us every day with food. It was so good of them.

…the neighbours and all the people in the street came with their children to visit us. We had good friends from day one.

A government house in Kew, Melbourne, was ready for our arrival. We lived in a row of identical houses behind the mental hospital with other young psychiatrists and their families. I remember how the neighbours and all the people in the street came with their children to visit us. We had good friends from day one. Not a single minute there was dull. Our children attended the local school which was so close that they did not even have to cross the road. I was always there for my children when they came home from school. They never came home to an empty house. I loved my life in Melbourne.

After four years Julian was offered an academic post at Sydney University as the first professor of child psychiatry in Australia. He didn’t want to accept because Melbourne was so good to us. A colleague eventually persuaded him that it was too valuable a career advancement to refuse.

We rented a flat in Darling Point (Sydney) and stayed there for the next 20 years. My mother’s candlesticks always had a place on the mantelpiece. She would light them every Friday night [in South Africa] for Shabbat [but] I didn’t keep up the tradition and haven’t used them much.

Visitors included staff from the hospital and many other politically minded people from South Africa.

The flat had two bedrooms but we turned the dining room into a bedroom. When my husband’s sister came to visit us, she also stayed with us. When I think of it now, I can hardly imagine how we managed! We were young, had lots of invitations and so we also entertained a lot. Visitors included staff from the hospital and many other politically minded people from South Africa who had migrated at the same time as us.

When each of my daughters turned 11, I gave them a key to the front door of the flat. I would wrap the key in many, many layers of paper in order to make the gift a great surprise. Of course, when they unlocked the door, I was always inside waiting for them.

Each day I was occupied with the washing, the ironing and the cooking. We had a twin tub in the hallway and I would do the washing with rubber gloves up to my elbows and then have to carry the washing down the three flights of stairs to hang it out. The washing would take a whole day.

…we believed they had to mix with all other cultures and social backgrounds. Maybe it was because of growing up with apartheid.

Our children never went to private schools; we believed they had to mix with all other cultures and social backgrounds. Maybe it was because of growing up with apartheid that we felt so strongly about that. And our children mixed with everyone. There was nothing that any of our girls ever did that we didn’t want them to do. They were never spoilt and whatever they did was good. I think on the whole we had a happy home.

Bernice married Michael, a non-Jewish boy and at the time she said to me, “Mum, do you and Dad mind’? We said, “Bernice, if you’re happy we’re happy”. Bernice was very independent. She did things her way. They married in 1971, and sadly she took ill in 1973. She passed away 5 years later. Michael and his lovely wife Jane are still in touch with me.

Hazel was full of fun. She was so sick as a child, we thought we’d lose her. She was really the apple of my eye because of the way she coped with her illness. Tragically she also died a few years after Bernice.

We were married for almost 56 years when Julian died in July 2001. Over these wonderful years we shared our tragedies and there are so many great memories. I often feel sad that I only have one child now who has all the responsibility for me. Lyndall is fantastic but she has her own life to lead. She is so good to me. This makes me feel sad.

boat tickets
“These are the tickets for the ship that brought us from South Africa to Australia.”

two suitcases
“We took these on the original journey from Cape Town to Melbourne.”

candlesticks
“These were my mother’s – she would light them every Friday night [in South Africa] for Shabbat.”