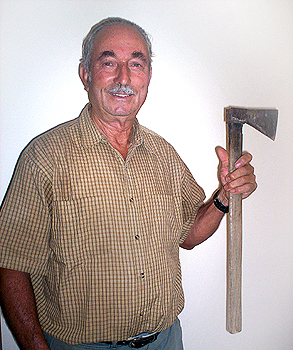 I stayed one week with my sister and brother-in-law in Five Dock, Sydney.

I grew my own vegetables with my brother, then owned a farm with my wife.

I was only able to get one day a week of work which was not enough to live on. Italy is beautiful but there was no future there.

I left Italy because there was not enough work in my town. Cinque Frondi was a farming community [with] mostly olive trees. The job to pick the olives was the job for the women and the men looked after the grafting and cleaning up of the trees with the axes and secateurs to make more fruit. I was only able to get one day a week of work which was not enough to live on. Italy is beautiful but there was no future there.

For some reason they accepted Giuseppe and Angelina quicker than me; it took ten years before I received the go-ahead. While I waited, I went to France to work and after working there for six months the letter came, so [I] went back to Cinque Frondi, said goodbye to my mother and father, and came here.

If I didn’t get the letter I probably would have stayed in France. I did not have any expectations about coming to Australia. I was happy to be going because there was no way I had a future in Cinque Frondi.

The trip on the boat took 29 days. I remember the injection for smallpox. I was sick for a week but after that I was fine. I never got seasick and would still eat even if the boat was moving from side to side. There was plenty of meat and they would give you extra if you wanted more.

I only started school at nine and finished at fourteen years old. While I was on the ship I used the exercise book to make a little diary…

I brought with me an exercise book and a couple of Italian textbooks which I had from school. I only started school at nine and finished at fourteen years old. While I was on the ship I used the exercise book to make a little diary of the days on the boat, such as:

27 July Messina – 10 hours before we left port.
Port Nora – port side.
All good on 31 August – we went through the Suez Canal which was hot.
Fremantle – 10 hours.
Port Arthur – half hour.

There were a lot of Italians on board and I have in that exercise book is the name of a man who I had met on the boat. He wrote down his new address in Australia but we only made contact ten years later at a wedding in Griffith!

I remember looking at these signs saying “SALE, SALE” and I was wondering how much salt [is] use[d] in Australia, because in Italian sale means salt!

Also on board was one man who had been on holiday in Italy. He was coming back to Australia and was our interpreter on the ship. When we stopped at Fremantle for a couple of hours he took us to a bar in town to drink beer. I remember looking at these signs saying “SALE, SALE” and I was wondering how much salt [is] use[d] in Australia, because in Italian sale means salt!

When I landed in Sydney, Customs would not let me leave because they had found little bottles of essence, used to make liquors, [that] I didn’t know my mother had put into my bag. There was no one to explain to me why Customs wouldn’t let me go. Then my brother-in-law Giuseppe arrived and explained and paid the £100 fine. I stayed one week with my sister and brother-in-law in Five Dock, Sydney. It was good to see my sister again and I was looking forward to going to live with my brother Angelo in Griffith, Riverina, a region of NSW.

I travelled with Ralph Macri who Angelo had asked to pick me up from Sydney. Mr Macri had an old international truck and it took 12 hours to travel 600 kilometres to get to Griffith. On the trip I remember the tar road looking like there was water on it but we would never go over water. I had never seen anything like it in Italy. Now I know it is an illusion from the heat on the road.

I remember the weather being very windy and lots of dust. The mosquitoes attacked me, I had sores all over. I got hay fever when the blossoms came out…

Angelo and his wife lived in one of the two houses on a property owned by Angelo’s father-in-law in Yoogali, a village which was seven kilometres from Griffith. I had a little room with no air conditioning. It was very, very hot then in August that year and there were dust storms which I had never seen before. I remember the weather being very windy and lots of dust. The mosquitoes attacked me, I had sores all over. I got hay fever when the blossoms came out; I had never suffered from hay fever before and had to go to the doctor. The doctor gave some medicine and I have never suffered again. I remember my brother had to come with me to the doctor to translate for me. His pronunciation was not very nice but the doctor understood.

I found the temperature, getting sick and the language very hard and I wasn’t sure if I would be able to live here. I asked my brother if he would give me the money to go back to Italy and he told me he didn’t have any money to give me so I had to stay. My brother got me some work at Mr Tony Gulloni’s farm in Hanwood another village on the other side of Griffith. We used pushbikes to get there. Mr Gulloni had another two Italian workers and I was able to speak to them; I felt better. We were pruning peaches and picking tomatoes and grapes and sending them to the market.

My secateurs, axe and grafting knife – I bought these from Italy. I went for lessons in Italy to learn about how to grow olive trees. An older farmer in our town would give us lessons and I learnt how to look after the trees from seed, to before, during and after harvest. I was given the secateurs and grafting knife as a graduation present. I didn’t use the secateurs much in Australia because the bosses here would give me a pair to use. I also bought with me from Italy an axe which has a smaller head than normal so you could use [it] inside the olive trees and it had to be very sharp so the cut was very clean. Looking back I think I would have been better doing more grafting here in Australia, I think I would have had my own nursery.

…my brother and I started to work for ourselves to grow vegetables. We grew carrots, onions, melons.

After six months my brother and I started to work for ourselves to grow vegetables. We grew carrots, onions, melons. We would send our vegetables to the market in Sydney. We would send the produce by railway every Monday morning. One year we had 60 acres of onions and lost them all because we couldn’t sell them – there was not a market for them.

I bought a second-hand, four year old 1957 Holden car. I put a deposit of £150 on it and was able to pay so much each week; it took about two years to pay it off. No one taught me how to drive. I had to teach myself and I drove from Hanwood to Yoogali in first gear. Lucky there was not much traffic and it was easy!

I remember being hungry all the time and I would even eat the Australian food if I had a chance to try some; I would eat everything. We were able to get pasta, not a lot of meat. We had kidney beans, they were our usual meals at night, and during the day we would have bread with tomato or cheese.

I did a couple of night classes in Griffith with my brother to learn English. The council opened this school for the Italians to learn English, there were about ten of us.

I took the [same] exercise book with me when I did a couple of night classes in Griffith with my brother to learn English. The council opened this school for the Italians to learn English, there were about ten of us. Mr Delpiano taught us English and Waltzing Matilda. We didn’t have much time because we were working but we went to about ten lessons. I remember I copied what my brother wrote in his book. He wrote it down wrong and I wrote it down wrong too!

When I learnt a little English it did make my life a little easier. To understand everything took a little longer and I said things around the wrong way, but things got better. I used to go to the movies because there was nothing else to do, there was no TV.

In 1963 my father and mother sold everything, left Italy, came to Griffith and lived with me. They never learned any English, especially my father; he was very shy. Mum settled well. They worked with me. Mum was 80 years old and still climbing trees and Dad would do the chipping of grass around the farm and along the channel banks.

I met my wife Lina when her father came to our farm to use a special machine to wash carrots. I started to visit her from then on and we got married in 1966 when I was 28 years old. Lina’s family was from a town called Terra Nova, not far from Cinque Frondi. We bought an old house for $2,000 in Griffith.

We bought Farm 813 at Stanbridge, which was about 15 kilometres outside Leeton, and stayed there for 31 years. We were lucky to get that sort of [bank] loan; no-one got that sort of amount in those days.

Lina and I wanted to buy a farm but we couldn’t find anything in Griffith that we could afford. One day my brother was in Leeton and heard that Bill Piccolo wanted to sell his farm. We told him we didn’t have much money so he took off $10,000. We got a loan from the Commonwealth Bank [for] $20,000 and the Development Bank gave $20,000. We bought Farm 813 at Stanbridge, which was about 15 kilometres outside Leeton, and stayed there for 31 years. We were lucky to get that sort of loan; no-one got that sort of amount in those days. The farm was already established with oranges. We picked every day and it took us five years to pay it off. We used to send our oranges to the Justfruit juice factory and Letona Cannery.

We ended up selling that farm because we were getting older and it was getting harder to find pickers to help us. Lina did not want to sell the farm, she cried and cried, but we now have a five acre block with a new house closer to Leeton.

This Belongings record is part of a collaborative project between the Migration Heritage Centre and the Leeton Italian Heritage Group.

secateurs
“I went for lessons in Italy to learn all about how to grow and look after olive trees and the secateurs were given to me as a graduation present.”

axe and grafting knife
“I brought them with me from Italy so I could do grafting and pruning of olive trees.”