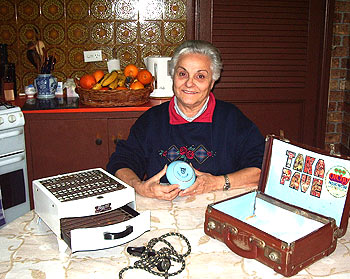 Cabramatta, Western Sydney from 6 January 1972 for a short while

House cleaning and at the STC electronic goods factory at Botany, Sydney

My early life was one of upheaval. I often think we were like gypsies for many years.

My family was separated during the Spanish Civil war (1936-39) and it was not until after the end of WWII that my mother and I were reunited with my father in Tangiers, Morocco. It was here aged 15 that I met my husband who I married in 1956 aged 19.

We lived through another period of unrest when Tangiers fought for its independence. We moved again to Algeria, and then finally my husband and I settled in Paris where my parents were then living. My children went to school there but because we were non-French people they were severely disadvantaged at school. I could not stand for this so I decided to apply to migrate to Australia. This would have been in about 1969. We had to spend the next year and a half attending interviews and having all our medical and criminal checks. Finally we were allowed to migrate. Our travelling group included my 3 sons, my husband, my cousin, who was a young single girl, and myself.

One evening after dinner we were sitting with our coffees and someone said, “I might just take this ashtray for a souvenir of the trip”.

We traveled to Genoa in Italy to board one of the Lloyd Triestino ships which brought us to Australia . It was such a beautiful trip. It was my first real holiday – just perfect. My children were excited, especially the older ones who were about 14 and 15 years old. My youngest son had packed his little school case with trucks and cars and toys to play with on the journey. There were lots of people on the ship and we made some good friends to keep us company on the journey. One evening after dinner we were sitting with our coffees and someone said, “I might just take this ashtray for a souvenir of the trip”. As we left the dining room everyone pocketed an ashtray! Apparently the Captain was aware of this and didn’t mind at all. We had English classes every day of the trip until we finally arrived in Perth on 31 December 1971. We then sailed on to Sydney and I recall arriving at Woolloomooloo on the Feast of the Epiphany, 6 January 1972.

It was night time and pouring with rain when we arrived. It was a bit scary arriving in a new place with no idea of where we were going. Anyway a bus arrived to take us to Cabramatta Migrant Hostel which was clean and it was OK but we knew we didn’t want to stay there too long.

… the person in charge walked around and hit us on the legs with a rolled up newspaper to make us work faster.

On the second day of our stay at the hostel my husband found work with a building company in Botany and my cousin and I also got a job at the Arnotts biscuits factory in Homebush. That was a terrible experience – we stood on the lines all day and the person in charge walked around and hit us on the legs with a rolled up newspaper to make us work faster. At the end of the first day my cousin and I went to the railway station to catch the train home and ended up catching the wrong train. We didn’t speak English which made the experience even more frightening because we couldn’t even ask for directions. Eventually we got back to the hostel – it was very late.

… to boil a pot of water for pasta you had to put it on at 7am so it would be boiling at 5.30pm that afternoon.

My other memory of those early days at the hostel was the strange food. We just could not get used to the food cooked in fat. I thought I should try and find a little cooker to cook some food on, at least some pasta, for my family. So I went to the hardware shop and spotted the plate warmer which I thought was a little stove. I brought it back home only to discover that to boil a pot of water for pasta you had to put it on at 7am so it would be boiling at 5.30pm that afternoon. My first attempt to cook pasta on it produced some very soggy spaghetti!

We didn’t stay at the hostel long before we were able to rent a Housing Commission flat in Wellington Street, Botany which was close to my husband’s work. We were supposed to be there for only six months but towards the end of that time we found this house to buy on Gardeners Road. We were allowed to stay until we could move into the house which is where we have lived ever since.

Once we had somewhere to live, my husband started up a small building business of his own which he worked at until he retired in about 1984 for health reasons. I worked in many different jobs but my favourite was as a cook at the office of James and Kirby on Broadway. They loved my cooking and I really enjoyed working there.

I loved Australia from the start. I loved its multicultural community which reminded me of Tangiers.

I loved Australia from the start. I loved its multicultural community which reminded me of Tangiers. It is something very rich for a country to have such cultural diversity. I settled here easily and was busy working and raising my children. My husband found it more difficult. The way they work in the building industry in France is quite different to here and he used to be criticized for the way he worked. He got upset by that and was determined to return to France in the early years. In the end I said, “We will go back for a holiday and if you still want to return we will sell up in Australia”. After that trip he decided to stay in Australia. I think he realized that it was not such hard work making a living here. I am glad we stayed. Australia is my home now.

Belongings interviews were conducted on behalf of City of Botany Bay Council in 2005.

electric plate warmer
“I mistakenly bought the plate warmer to cook pasta at Cabramatta hostel! It is white enamel and has a pull out grill.”

son’s small school case
“The small, brown case was taken on our migration journey filled with toys for my son to play with. It is covered with various product stickers stuck on it dating from 1970.”

ashtray from the Lloyd Triestino ship
“This ashtray was taken from the ship we migrated on as a souvenir. ‘Lloyd Triestino’ is branded on the bottom.”