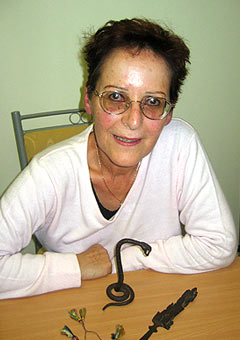 My husband ran his own business, Gabriele Torsello Interior Decorator 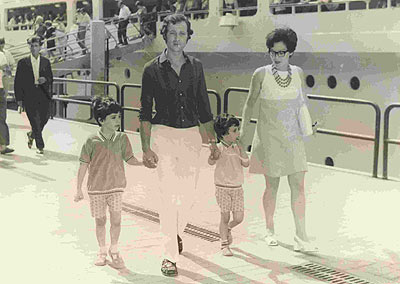 We left Italy on the ship Marconi. I was 27 and my husband Gabriele was 31. Our two sons, Lulli and Giambi were four and five. On board the Marconi we had so much fun it was unbelievable. We met so many friends there who still remain our friends now. I remember the weather was splendid. Our cabin steward said, “I’ve been doing this job for 20 years and the weather has never been so beautiful”. 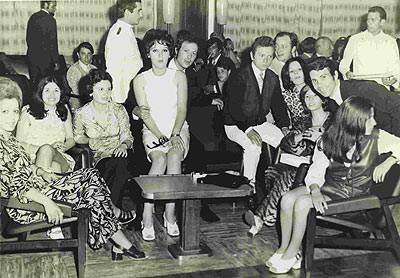 In Perth, we ordered a coffee and they gave us this big cup of grey water. That was Australian coffee.

The kids enjoyed it too and there was always someone to look after them when Gabriele and I wanted to go dancing. The food was good because the Marconi was an Italian ship. We missed the coffee though. The coffee on board wasn’t good. So when we arrived in Australia we just had to have a real coffee. In Perth, we ordered a coffee and they gave us this big cup of grey water. That was Australian coffee.

We didn’t bring a lot of things with us from Italy because we felt sure that we would return after two years. But I did choose to bring a few things that were very important to me for sentimental reasons.

We didn’t bring a lot of things with us from Italy because we felt sure that we would return after two years. But I did choose to bring a few things that were very important to me for sentimental reasons. One was a needle case bearing my initials ‘MC’ [for maiden name, Maririta Cancellieri] that was made as a gift for me by an Italian prisoner while he was in custody at a gaol where my father worked as the head warden. It was quite common for prisoners to make hand crafted items to pass the time in prison.

The other two objects were a metal letter opener and a snake that belonged to my mother. I don’t know who made them, but I have always loved these objects because they were made from the remains of hand grenades found in the field during the war. It was a time of such sadness and cruelty, but these pieces were fashioned into beautiful things to be used in times of peace. So when we decided to come to Australia, I wanted to have a few special things of my own, so I asked my mother if I could bring these pieces that I had become so attached to.

Our migration story is a bit different because we came to Australia purely for the pleasure of having an adventure. My husband, Gabriele didn’t need to come here for work, he already worked in Italy as an interior decorator. He came home from work one day and showed me an advertisement in the newspaper and he said, “Look what’s in here. Let’s go to Australia!” And I said, “Yes”. The ad read ‘Come to Australia for only 17,000 lire’ (around $17). Wow! Can you imagine, a new world, but you had to stay a minimum of two years and then you could leave and we said, “Let’s go! This is going to be the biggest adventure of our lives”.

When we arrived at Circular Quay in Sydney from Genoa, the first thing that made us realise that everything was going to change was when they gave us a button with a colour and immediately we felt not like people anymore but like numbers. It felt so strange.

The only thing I can tell you is that I saw so many people cry, so many people sad at having left Italy and found themselves here in this cold, metal, crowded building.

They put us all on a bus at night, it was dark, with a lot of other people and we drove forever. We finally arrived at the hostel near Liverpool, everything was dark. They put us in a barracka [barrack]. It was a round building made in metal. Cold, it was so cold, August it was. They said don’t worry, you’ll only stay here for a week and we’ll find you a place. And, in fact that was true. The only thing I can tell you is that I saw so many people cry, so many people sad at having left Italy and found themselves here in this cold, metal, crowded building. And the strange thing was that, Gabrielle and I, we were laughing, because as I said before, we started out on an adventure, something that would last only a short time.

The first day I went to check it out, there was an extremely long queue… The food wasn’t very appealing at all.

After about a week we went to stay in a flat in a new section of the hostel grounds with all the comforts. We were the lucky ones. The flat had two bedrooms and a living room but no kitchen. They didn’t want us to cook. There was the mensa or canteen. You’d go there three times a day. The first day I went to check it out, there was an extremely long queue. It was an enormous room and you entered and far away there was a display of food. The queue was long. I looked and thought why was everyone there? I just went straight up to the counter. The food wasn’t very appealing at all. Then an Italian woman came up to me and tapped me on shoulder to tell me I had to go and get in the queue. That was my first experience with a queue.

Another funny experience was our first night when we moved into the flat. Giambi and Lulli had two single beds and for us there was a sofa, a vinyl one and very small, at night it becomes the main bed. The first night we couldn’t open it, perhaps the mechanism wasn’t working. I think it was rusted and we couldn’t stop laughing. In the end we finally opened it and we went to sleep, but because it was vinyl it was very slippery and we kept slipping. We couldn’t stop laughing. We finally put Giambi and Lugli on the sofa and put their single beds together and we slept there for the rest of the time. We stayed in the flat for about six months and we made friends there with other Italians. I still see three or four of them now.

The only thing that you couldn’t do was cook in the flat. But you know all the Italians used to buy their little fornello [cook top] and a little pot to make sauce.

The hostel was around the Liverpool area [in south-west Sydney]. We were free to come and go as we please. The only thing that you couldn’t do was cook in the flat. But you know all the Italians used to buy their little fornello [cook top] and a little pot to make sauce. I didn’t bring coffee or a percolator with me because I thought I would buy it here, but I couldn’t find anything. So when I met a Neapolitan lady, she said “Do you feel like a coffee?” and I nearly fainted. I would kiss and hug her and said to her, “You are saving me because I am dying for a coffee”.

My husband started work outside the hostel within just two days of our arrival at Butlers Painters and Decorators. Giambi immediately went to school in the local area and Lulli stayed home with me. The first time I saw him [Giambi] going off on the bus, I could see his little face in the bus window. It was very sad for me. But he picked up English immediately; you could say it was unbelievable.

After six months we moved out of our flat at the hostel to a rented flat in Marrickville [in inner-west Sydney]. Gabriele became the foreman on his job and after about a year and a half, with all his old contacts and making new ones, he started to work for himself, his own business, Gabriele Torsello Interior Decorator.

This Belongings record is part of a collaborative project between the Migration Heritage Centre and Co.As.It Italian Heritage.

letter opener
“The letter opener was made during WW2 in Italy from the melted remains of hand grenades and originally belonged to my mother.”

snake
“The snake was made during WW2 from the melted remains of hand grenades and originally belonged to my mother. It’s a decorative piece standing in a coiled position and stands about 20cms high.”

needle case
“This delicate, hand crafted needle case, about 6cm in length, was made as a gift for me by an Italian prisoner in 1945. My father was head warden of the gaol.”