THE AGE OF MACQUARIE 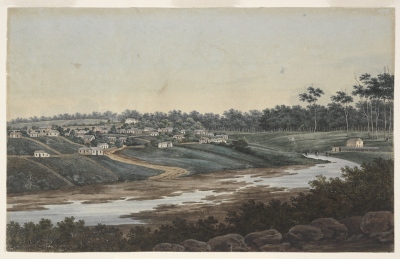 Between 1789 and 1791, the colony at Sydney Cove was critically short of food. To make matters worse, the supply ship HMS Guardian was wrecked off South Africa before it reached the colony, and HMS Sirius, one of two of the colony’s navy vessels, was wrecked on Norfolk Island. In desperation, the HMS Supply, the Colony’s second navy ship, was sent to Indonesia for food.

Hopes were raised when a vessel arrived in Port Jackson in 1790, but it was not the Supply, but the first of a Second Fleet of five ships carrying over 730 people.

Unlike the First Fleet with its planning and measures to ensure the health of the convicts, the Second Fleet was contracted to private businesses who kept the convicts in shocking conditions. Upon disembarkation the sickly convicts were a drain on the already struggling colony.

Of 1000 convicts on board, 267 died and 480 were sick from malnutrition, scurvy, dysentery and fever. The supplies on board the Second Fleet were supposed to feed the convicts, but the ship sailed ahead of the convict transports and the ships master withheld the supplies, starving the convicts, so that there was more they could sell afterwards and the earlier the convicts died on the voyage the more of their allowances the shipmasters could keep to themselves.

Two years after the arrival of the First Fleet, the colonial authorities had, according to plan, allocated land to male emancipists and expirees in little settlements at Norfolk Island and New South Wales. After completing their term of hard labour, ex-convicts were encouraged to stay in the settlements and cultivate their 30 acres of land- or more if they were prepared to marry and have children. Tools, provisions, grain, cattle, sheep and hogs were provided. The land was a gift, free of all taxes and quit rents for ten years, provided the ex-convicts agreed to live on and improve it, while also reserving all the timber fit for ‘naval’ purposes for the British Government. These plans were a novel solution to the problem of how to establish a colony thousands of miles from Britain. Soon farms, established at Rose Hill near Parramatta and later at Richmond and Windsor, were soon producing crops. Explorers set out to find new land and areas were opened up in the Liverpool area for market gardens, viticulture and sheep grazing for wool. 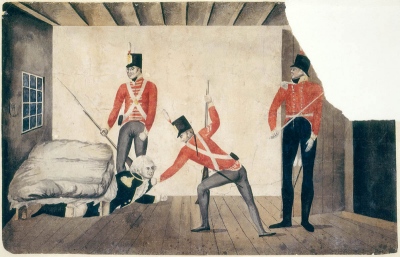 As the Colony expanded, new land was needed for farms and the new cash crop of wool, with sheep runs getting bigger and bigger. Several ex New South Wales Corps and ex-convict businessmen were becoming wealthy by exporting wool to England. They also had become quite powerful and even deposed Governor Bligh who tried to control their business activities.

Governor Lachlan Macquarie took control of New South Wales in 1810 and immediately got to work and dismissed all officials who had been appointed by the New South Wales Corps, and restored the people who had been in those jobs before the Rum Rebellion. One of his first actions was to reduce the number of licensed public houses in Sydney from 75 to 20, though very soon after their number was much increased, and he began the widespread building program that characterised his administration. The streets were straightened and improved, new barracks were built for his regiment, and the New South Wales Corps was sent back to England. In November he began a tour of the colony and in little more than a month was able to form some opinion of its capabilities.

To the west of Sydney, the Blue Mountains presented a physical barrier and Macquarie set the challenge to find a passage. In 1813, explorers Blaxland, Lawson and Wentworth crossed the Blue Mountains and found rich plains as far as the eye could see. This was an economic bonanza for the New South Wales businessmen. The Government tried to regulate land use by setting up 13 counties radiating out from Sydney for 200 miles in all directions. Land use beyond these was forbidden. This was hard to enforce and businessmen sent shepherds into the frontier to ‘squat’ and graze sheep. Eventually the businessmen claimed this land as their own and became known as squatters. All the while Aboriginal people were being forced off their homeland and in many cases murdered if they resisted. 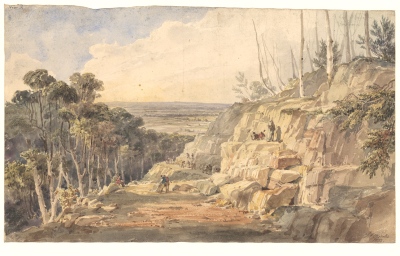 1826 Augustus Earl Lithograph of Bungaree
This lithographic print of King Bungaree attributed to Augustus Earle and dated 1826 is evidence of early interactions between Ruopeans and Aboriginal people. It is a significant object from the State Library of NSW Collection.
more details »

1800 Matthew Flinders' Bicorn Hat
The bicorn hat has historical value. It was owned by Matthew Flinders, one of the greatest navigators and cartographers in Australian history, and later by the Flinders family.
more details »