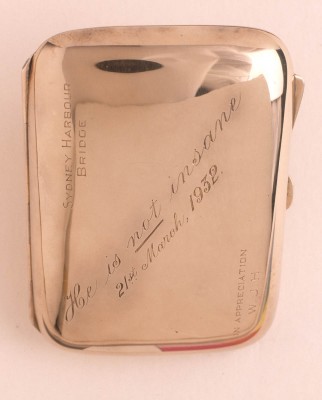 Object Description:
Engraved gold cigarette case presented to Major F. E. De Groot, 1932 Inscribed with the caption He is not insane. 21st March 1932. In appreciation W.J.H. following the incident at the opening of the Sydney Harbour Bridge.

By 1931 it seemed that capitalism had failed. The Establishment responded to the Depression with plans for “austerity”. In 1930 Sir Otto Niemeyer from the Bank of England visited Australia to advise governments to implement a deflationary policy. Niemeyer contended that wages must be cut to make our exports more competitive and to raise profits. Niemeyer advised savage cuts in all existing social services. But more significantly Niemeyer demanded that Australia not default on its international loan obligations to Britain. With pressure tactics and careful diplomacy Niemeyer sold his plan to Australian state and federal politicians. They called it the ‘Melbourne Agreement of August 1930’.

In the 1930 New South Wales elections Jack Lang was returned overwhelmingly as Premier of New South Wales. His first government (1925-1927) had introduced comprehensive systems of widow’s pensions, child endowment, and worker’s compensation; his second government pledged itself to maintain these hard-won gains and steer the state out of the Depression.

Immediately, Lang rejected the Niemeyer plan. At a stormy mass-meeting in the Sydney suburb of Paddington he declared:

… The same people who conscripted our sons and laid them in Flanders’ fields… Now demand more blood, the interest on their lives…

According to Colonel Eric Campbell, founder of the New Guard, his movement was pledged to uphold law and the constitution. By the close of 1931 the New Guard had received 87,000 applications for membership in New South Wales and had built strong links with similar fascist groups in other states. Its strongest support lay with ex-soldiers and ex-officers. His main aim was to crush communism in Australia.

The New Guard sprang from a shadowy “Old Guard” which drew its funds directly from large banks, insurance companies, and other firms. Any plans of the cancellation of debt raised not the image of Australian self-determination but Bolshevist Communism. The capitalist class cynically manipulated the New Guard to its end of smashing the Lang government by any means necessary – by direct threats of force and through press hysteria. The New Guard brought New South Wales to the brink of civil war.

In May 1932 Sir Philip Game, Governor of New South Wales, sacked the Lang government and ordered new elections. The New Guard automatically offered support to the United Australia Party. The conservative press painted Lang as a wild man manipulated by the Soviets and the Communist Party, and his government was defeated at the polls.

With the “Communist danger” removed the New Guard rapidly declined and disappeared completely by 1935. It had done its job.

But Lang persisted. His meetings in 1931 and 1932 had been the largest ever seen in Australia. On one occasion, Sydney’s Moore Park was tightly packed and included folk who had walked to Sydney from Bathurst. The slogan “Lang is right” had become the watchword of Sydney’s unemployed. In 1933 Lang further developed his ideas on finance; he came to advocate views which took the best from Social Credit and pushed for the socialisation of credit using the Reserve Bank to provide funds for capital creation and for stimulating consumer demand. He spoke more than ever as a nationalist against the demands of international capital.

Francis De Groot grew up in Dublin, Ireland, a member of an elite Irish Huguenot family. In 1910 the family migrated to Sydney Australia and set up a furniture manufacturing business. Prior to World War One he worked as a merchant seaman, coal lumper and antique dealer. After serving in World War One rising to the rank of Captain, he returned to Sydney to manufacture reproduction furniture of the finest quality. Captain Francis De Groot held ultra right wing views and joined the New Guard shortly after return from World War One. De Groot became a senior member of the New Guard and became the leader around 1931.

Saturday, 19 March 1932, the day of the opening of the Sydney Harbour Bridge, one of the most significant occasions in the history of the city of Sydney. The public mood, however, was apprehensive more than it was festive. As one senior journalist later reflected, ‘the city was jumpy, jumpy as I’ve never known it since’. De Groot vowed that Premier Jack Lang would not open the Bridge. The police and security authorities were concerned that the New Guard might kidnap the Premier, and stage a coup d’état. The Police were tense, watching for any approach of an angry mob.

Into these bizarre circumstances rode de Groot wielding an ex-cavalry sword. Slashing the ribbon with his sword he declared the Sydney Harbour Bridge open ‘in the name of the decent and respectable people of New South Wales’. 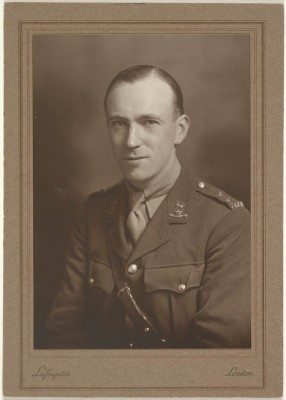 Captain De Groot became part of Australian folklore for his part in the Harbour Bridge opening.

The cigarette case is historically significant as evidence of the divided community in the circumstances surrounding the stand off between Premier Jack Lang and New South Wales Conservatives. The cigarette case is evidence of right wing Irishman de Groot’s role in the opening of the bridge incident and the markedly divided views of the nation at the time as to whether deGroot was mad or a visionary in the New Guard’s battle with Jack Lang and the New South Wales Labor Party