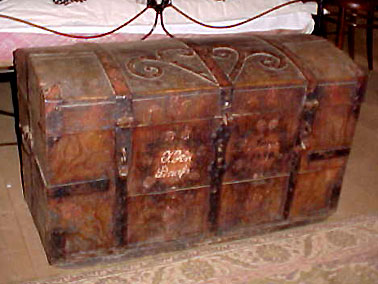 Many German migrants living in South Australia and Victoria moved to the Riverina after the 1861 Robertson Land Act provided for the selection of land for £1 per acre. In 1858, the town of Holbrook was locally known as ‘the Germans’ and officially changed to ‘Germantown’ in 1876. Communities in the Riverina grew and prospered in the late 19th and early 20th centuries with the success of the wool and agricultural industries. Jindera, Walla Walla, Gerogery, Milbrulong, Henty and Trungley Hall also maintained Germanic populations, along with the townships of Jindera, Walla Walla and Henty.

Although it is not known which ship carried Johann Jacob Forck from Germany to South Australia, two vessels are listed as having departed from Hamburg in 1880. Elizabeth left Hamburg on 26 February 1880 and Casilda on 22 May 1880. Both these ships carry incomplete passenger lists.

There was little change in the cost of steerage fares between 1860 and 1914, with adult passages averaging between £12 and £16. Under the special contracts organised by each colony’s Agent General, the cost to government was about £1 to £3 less, depending on demand in specific years. 1

In the late 1800s, a policy of well-built bulkheads dividing the steerage area on board government immigrant ships was generally adopted. Single males fourteen years and over occupied the compartments closest to the bow. By law, they each had to be berthed separately. 2

Space was even more at a premium, for German immigrants; in the early years everyone was accommodated together in one long dormitory between decks. Apart from swinging cots or hammocks in the single-men’s compartment of some ships, regular bunks were constructed of wood until the introduction of iron berths in 1886. These not only provided single berthing for both the fore and aft sections, but could be dismantled and reused, reduced the incidence of vermin, and allowed better cleaning. 3

The trunk is also associated with the immigration sea voyages undertaken by thousands of men, women and children during the latter part of the 19th century. With limited space on board immigration vessels, the secure storage of personal effects was of paramount importance.

The trunk is historically significant as an object directly related to the journey of a German migrant of the late 19th century from Hamburg to South Australia and then to the Riverina. This journey was typical for many German migrants settling in the Riverina region.

The aesthetic significance of the trunk also adds an extra dimension to its narrative potential. Robustly constructed, with its traditional European design elements and folk-art painted trim, the trunk has survived possibly two long sea voyages and several overland journeys through the Riverina.

The trunk is associated with the journey of migrant Johann Jacob Forck. It is representative of a type of traveller’s trunk object that was once common, but is now rare. It is also rare for a 19th century immigrant’s trunk to be well provenanced with information about the life of its owner.

The travelling trunk is in good, original condition.

The trunk is a powerful interpretive tool in the story of the migration journey of Johann Jacob Forck to the Burrumbuttock and Trungley Hall areas of the Riverina. The travelling trunk has interpretive potential in interpreting the themes of German migration and settlement in the Riverina, maritime technology in the late 19th and early 20th century, and the story of the long perilous sea voyage for migrant in the late nineteenth century.

Written by Annette Brown
Museum of the Riverina
August 2004