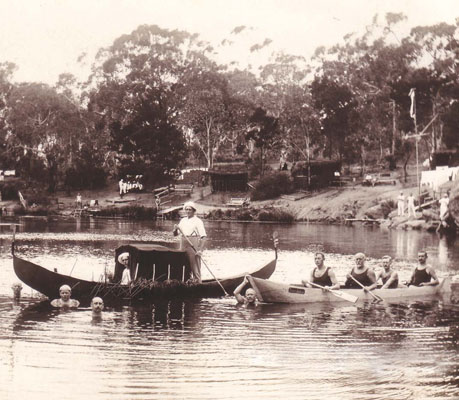 In March 1915 the first group of 89 internees arrived on foot at Berrima. The gaol was hastily cleaned up and made secure. The internees’ luggage had not arrived and there was no furniture. They were supplied with basic sleeping materials and they had to cook their own food. It was out of this sombre mood that the men named the gaol Ahnenschloss (Castle Foreboding).

It was their goodwill, ability and industry that the majority of the villagers came to appreciate.

Because of their maritime background, most of the internees spoke adequate English and had little difficulty in communicating. They were polite and well-behaved, buying large quantities of bread, meat and provisions from the local stores. Some rented houses for their families who had come to live near them. But it was not just the economic benefits that made the internees popular. It was their goodwill, ability and industry that the majority of the villagers came to appreciate. The internees were often called by village women to remove snakes from their houses and they saved the Berrima School from a bushfire.

The internees created a pleasure garden and a flotilla of canoes on the Wingecarribee River.

Berrima and Trial Bay were satellite camps of the very large Holsworthy Internment Camp at Liverpool. The German Concentration Camp Guard was made up of units of 25 men which were rotated frequently between camps. The system of rotations was aimed not only to minimise guards becoming too friendly with the internees, but also to reduce any opportunity for guards to exploit internees. Initially the Guard units were rotated fortnightly, then monthly from 1915 until 1917 when the 29th Guard was on duty for most of the year.