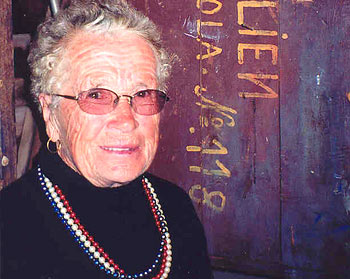 My father was a process worker at the Emmco whitegoods factory in Orange.

Kate: Mum’s name was Anna Pankevych, and she was born in 1923 in the village of Podilci in the region of Sambir in the oblast of Lviv in the Ukraine. She was taken by the Germans on 20 January 1942 to Germany and then to Austria. After working as a forced labourer in Austria, mum ended up in the Judenburg displaced persons’ camp, then the Trofaiach Displaced Persons Camp. Dad was taken by the Germans along with three other young men in 1943 to serve in the SS Ukrainian Galicia division. Dad was from the village of Medwedowcie outside the town of Buchach in the region of Ternopil. His army training was in Germany, and his mother learnt enough German to go and seek out her son and take him bread, along with other mothers who relied on her for translation. Dad deserted from this army and ended up in Austria without working papers. Mum used to sneak food to him from the farm where she worked.

After six months Dad found a space to rent in the tiny packing shed on Charlie Williams’ orchard just behind the factory.

We sailed from Naples on the Marine Jumper in August 1949, arriving in Sydney in September 1949. We were taken by train to the Bathurst Reception Centre and spent about six weeks there in Hut 5, Building 15, Block B. In October 1949 Dad was given his employment papers to work in Emmco, Orange. At the same time Mum and I were sent to the Parkes Migrant Camp where we spent six months while dad lived in the ‘ Tent City ‘ with Mr Kich as his tent mate. After six months Dad found a space to rent in the tiny packing shed on Charlie Williams’ orchard just behind the factory. Mum and I joined him there in April 1950 and stayed there for the next 11 months while Dad built the house in Tynan Street.

We moved in around March 1951 when the roof was on but there were still no windows and no plastered walls. Dad invited Ukrainians Mr and Mrs Borschtsch and two daughters to use one room and George Bugil had the other. Dad met Mr Borschtsch at Emmco.

He always used to tell me that the foremen used to get him to fix things and solve problems but that he would never be promoted above a local.

When Dad was laid off work at Emmco he worked on the railways as a train driver, before he had his mental breakdown which put an end to that job. After recovering, Dad again got a job at Emmco. He always used to tell me that the foremen used to get him to fix things and solve problems but that he would never be promoted above a local. He always stressed to me that I had to study hard so I would not end up with a job like he had to do. He was still employed at Emmco when he took ill and died after a heart attack.

… it was more the fact that this factory worker in soiled smelly clothing had the cheek to argue with a well dressed smart salesman that I found embarrassing then.

I recall as a teenager being highly embarrassed in Western Stores one day when Dad took me with him to select our first lounge suite. Of course the selection meant whatever was the cheapest and whatever we got was going to be real luxury for us. Dad was in his overalls and straight from work at the factory. He proceeded to bargain with the salesman making him lower the price. As soon as the salesman agreed Dad would keep pushing him for an even lower price. Bargaining was not something I was comfortable with. But it was more the fact that this factory worker in soiled smelly clothing had the cheek to argue with a well dressed smart salesman that I found embarrassing then.

…the parents all socialised together, having singsong evenings accompanied by beer, vodka, Polish sausage and rye bread.

My memories of life in Tynan Street are ones of feeling safe, warm and secure. The street was full of migrant kids and the parents all socialised together, having singsong evenings accompanied by beer, vodka, Polish sausage and rye bread. They would even push the kitchen table aside, put on some Ukrainian polka music and dance the night away while we children fell asleep in the warmth of the cosy wood stoves.

Dad would always attend the Anzac Day ceremonies at Robertson Park . It was only later in my life that I understood why. He used to take us in the old Hillman to Saturday football in Wade Park. We watched from inside the car. And of course there were the regular trips to Lake Canobolas every Sunday in the summer months. Dad taught me to swim, breaststroke of course, by first getting me to use an old tyre insert as a floatie. Lots of Ukrainian families used to congregate at the lake in summer.

There was nothing quite so much fun as picking up the potatoes that Dad turned over, each of us kids trying to get the most.

Then there were the weekends spent earning extra money by picking peas or apples or cherries. The kids were meant to do their bit as well. And of course there was the big vegetable garden which Dad and Mum used to tend every year. We had our own potatoes all year round. There was nothing quite so much fun as picking up the potatoes that Dad turned over, each of us kids trying to get the most.

We would watch the cattle and sheep regularly passing by down Tynan Street , slowly on their way to the saleyards. Across the road from the row of houses were paddocks where after the rain the grass grew so tall and green that when we ran through we could not be seen.

embroidered apron from the Ukraine
Kate: “The apron is white cotton with rows of coloured cross-stich patterns embroidered on it and a broderie Anglaise border. I think my mother [Anna] took it with her when she was deported by the Germans from the Ukraine and sent to work in Austria.”

wooden trunk
“My wooden trunk has my father’s name [Nikola Babij] stencilled on it, plus ‘Australien’ and a reference number. It contained what little goods our family brought with us from the displaced persons’ camp in Austria.”