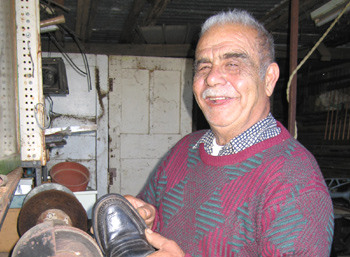 I stayed with my aunt and uncle in Broken Hill.

I fixed shoes at my uncle’s shop in Broken Hill.

I opened my own bootmaking shop and later worked as a miner.

I was born in 1932 in a village called Androniani in Greece. I go to school in 1940 after the Second [World] War start. In December 1948 my uncle write letter to bring me to Australia, so I not go into the army. The civil war start, always trouble there, you know, Greece, in the middle, one country arguing to another. Turkish, Bulgaria, everything. I saw plenty of killing. Greeks shoot one another.

My uncle, he used to have a bootmaker’s shop in Broken Hill… My mother decided to send me there, work five years [and return] to Greece .

My uncle used to be [in Greece] ’til 1924. [In] early days plenty of people come to Australia – Italians, Greeks, Yugoslav – for work after the First [World] War. My uncle, he used to have a bootmaker’s shop in Broken Hill. He write letter to say to learn the trade. My mother decided to send me there, work five years [and return] to Greece. I knew I was coming to work as a bootmaker but I [didn't] like it at the time.

I come here myself. The first ship was the Corinthia. I get on the ship at Athens on 24 December 1948 and go to Alexandria (Egypt) and then Cairo with the train. I stop there 22 days because there’s no big ship to come to Australia. Myss was an Egyptian ship with 400 people my age and women. You know, their husbands come [to Australia] before the war and get their wives after and bring to Australia. Yeah, I enjoyed it, plenty of friends on board. By the time we come to Melbourne, one go that way, one go to Brisbane, one go to Sydney, one go to Mildura. Everyone go different places. Only me and one lady, we go to Broken Hill.

Myss arrived on 25 February, 1949 at Melbourne. My aunty wait for me there and we get the train straight to Broken Hill the next day. About 27-28 February we come here. I lived with my uncle and aunt for three or four years and worked with my uncle for two years at Champion Shoe Repair on Sulphide Street. Now it’s a pizza bar! I learned the trade here, I fix shoes at that time. He’s not too bad, I can’t complain. He looked after me alright and my aunty used to cook, wash, everything.

I used to cry every day to go back to Greece, but I never had any money to pay my ticket. My family [in Greece] were [worried]; they don’t like [me being here]. I got letters from my mother, “come back again, come back again” and I never come back. After a couple of years I like it here, you get used to it. So I stay five years . I stay 57 now!

…we used to go three or four together because if you go by yourself Australian people look for an argument, a fight. We had a few fights in those days.

People speak English and because you can’t, you have a hard time. After a year we start to learn something and it will go alright. People in Australia more different now – you can talk Yugoslav and nobody worries. But at that time if you go to the pub, we used to go three or four together because if you go by yourself Australian people look for an argument, a fight. We had a few fights in those days. After I bought the shop I learned to speak more English – “sole”, “heel” and “yes, please”!

I got my own business to make more money in 1951; it was Central Shoe Repair on Oxide Street. When I bought the shop, the finisher machine, polishing machine, stitching machine and presser were already there. One of them might be over 100 years old now, you know.

That time I come to Australia not many motor cars, no TVs, no air-conditioning, no fridges, freezers.

I got a room behind and live in there. At that time shoemaker making good money; all the shoes and repairs were leather. Oh yeah, I was making good money at that time. For wages I might get £20-30 but I used to gamble. We used to have five Greek clubs here, now nothing. I am the oldest here from Greece; all the others are now “kaput”. A couple of years ago all members finished [at] the Greek club. Now no club, no Greeks, because the new generation, even my kids, don’t go to the club. They’ve got different stuff now: TV, motor cars, everything. That time I come to Australia not many motor cars, no TVs, no air-conditioning, no fridges, freezers. After 1955 started fridges and I bought a car in 1956, a Holden, and I used to go to Mildura to meet my “Mrs”. Her father has a grape farm there.

I know Helen from Greece. We used to go to school together. I used to go to Mildura all the time because she’s got a brother and we used to get drunk many times there. In 1957 my aunt met Helen’s mother and, you know, talk one to another. We marry that year.

After 1966 there’s not much work because everyone buy plastic shoes, thongs, rubber boots, not leather. That’s the trouble. I close the shop up in 1972 and bring [the machinery] all [home]. There is no bootmaker shop no more, now a video shop. I got not much money and because I’ve got three kids I decide to go to the mine, a more secure job and more money. I started working on the zinc mine underground in 1969.

A few people get killed every day. I get a couple of accidents myself; I broke my leg, my arm because of the tracking. It came falling down and it hit me.

I work hard underground, no fresh air, nothing. But I like it and I drive the train about 4,000 feet underground. A few people get killed every day. I get a couple of accidents myself; I broke my leg, my arm because of the tracking. It came falling down and it hit me, but very lucky I hold the ladder and pull myself up. I still never worried that much, never afraid.

If you done your job then, the bosses are good. At that time the bosses not got much power like now. The union very strong at that time. Every company nearly had 6,000 people in the mine. That time all manual, by hand. Big machinery now; in 1992 they sack us because they’ve got big trucks, but that time I finish myself because I’ve got 61 years.

The time I’ve been to Greece in 1970, I’m [a] stranger. All my friends marry, move, I only knew the old people left there. New generation and I don’t know no-one, and after a few years my mother and father died. A few years ago my brother died in Greece and now I’ve got two sisters there.

I’ve got plenty of friends here and I don’t like to live in Greece now anyway.

I reckon that Broken Hill is the best place. I’ve been to Adelaide because my kids live there now, but it’s not relaxing like here. In city not much good especially for old people like us. Very hard for us to get friends. I’ve got plenty of friends here and I don’t like to live in Greece now anyway. If you have family and go all together it might be alright. But I don’t like to go and live there and leave my kids here. I worry like my mother worried before.

presser
“This machine was used to cut leather soles and I think is over 100 years old!”

polishing machine
“When I opened my own bootmaking shop in 1951, some machines were already there.”

Singer stitching machine (1955)
“I bought this machine for my own bootmaking shop, Central Shoe Repair in Oxide St, Broken Hill.”

till
“I used this till in my shop.”