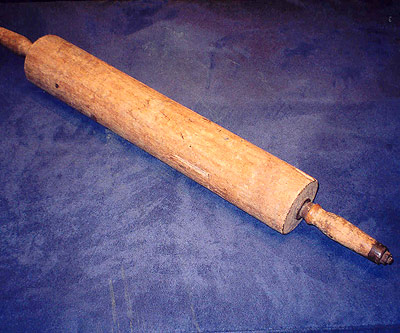 Bathurst for a few months from March 1951

Henny: my husband was a baker.

Henny: my husband was a labourer at the gas works in Grafton, then an orchard hand near Orange and a baker in Orange.

Henny : I was born in Niew Beijerland [Holland] in 1918 and married in 1944. [The war] was a very hard time. My parents had a grocery store and also sold hot water for washing. When the Germans came to take the men, my husband hid in a big kettle [boiler] with another man with newspaper on top.

For one week my husband was on the fisherman’s ship hiding.

We arrived [in Australia] in March 1951. The two boys [sons, Arthur and Baz] had measles so we waited four weeks. We went on the English P & O ship Malloja. It had no stabilisers. We paid for ourselves (we sold the shop). I was terribly seasick. The boat went from Holland to England then we got one from Southampton.

We went on the train to Kelso [near Bathurst] to the migrant camp. I did ironing for one of the bosses [at the camp] to earn some money.

Baz: I can remember in the migrant camp Mum had to wash us in concrete wash tubs. It was so cold. There were a lot of rabbits around and Dad used to take us rabbiting – we used to trap them and eat them.

When he arrived, the accommodation was a rabbiter’s hut which was just filthy.

Arthur: While they were at the camp at Bathurst, Dad was offered a job as a baker at Wagga. When he arrived, the accommodation was a rabbiter’s hut which was just filthy. Because he’d left, it was very hard to get back in the Kelso camp. Then an opportunity came for meter reading for a gas works at Grafton and they stayed there with these lovely ladies. But it turned out to be a shovel and pick job. While they were there they met Courtney Hawke’s grandfather [and he told them about work in Orange]. Harold Hawke picked them up and they had temporary accommodation in the tractor shed. Their first fridge was a Charles Hope.

Henny: I rode a man’s bike from Canobolas into town. My husband was spraying and cutting and I did picking. I used to sell butter and that paid for the furniture. You never give up. It was not always easy. We lived on the orchard for four years.

As well as bread he made pastries. I can still see Dad with his big hands.

Baz: Dad wouldn’t work on Sundays. On Sunday the fruit truck would come to pick up the fruit. Dad would milk the cow but he wouldn’t do anything else. One day he fell off a ladder with a bag of apples and he dislocated his spine. He was in Orange Base Hospital for eight weeks encased in plaster. A chiropractor got Dad right [but he couldn't do the orcharding work any more]. He worked for Smeaton and Campbell in Kite Street. The bakehouse at Spring Hill was owned by Moss and May. Dad got a loan from the flour mill in Bathurst to buy the bakehouse for £4500. He baked bread for Spring Hill, Spring Terrace and Lucknow . As well as bread he made pastries. I can still see Dad with his big hands. The bakery became a grocery store as well and later they sold ice cream.

Henny: Baz and Bill [another son] had to chop wood and keep the wheelbarrows full and grease the tins. We worked from morning to night. I went to bed at 12 o’clock and then up at 4 o’clock and expecting babies as well.

Right through our childhood we had to pull bread in and out of the oven.

Baz: Right through our childhood we had to pull bread in and out of the oven. Bill was good at cutting the dough out and weighing it out on the scales. The bakehouse at Millthorpe was up for sale. Dad closed the bakehouse down at Spring Hill and bought the Millthorpe one. It was all cooked at Millthorpe [but they retained the Spring Hill shop and lived there].

Baz: When us kids started going to high school we weren’t so involved. Mum used to wake us up at 1 o’clock on Friday morning. [aged 13/14] I used to drive our empty truck to Millthorpe and at 6 o’clock we’d load up the bread truck. We’d go past the Millthorpe Police Station. [The policeman] would be milking his cow. Later he told us ‘I used to wonder why this driver was wearing a hat and dark glasses’.

Australians were very cautious at first but very friendly.

Henny: Australians were very cautious at first but very friendly. The other migrants [in Spring Hill] worked on the railways, forestry, pea picking etc.

We moved to Orange in 1964. I was so happy to get out of the bakery. It was day and night working. My husband worked for Smeaton and Campbell Bakery in Kite Street. I went cleaning the house for Mrs Dresser in Rowan Street . We used to live in Frost Street. Later we bought the [second-hand furniture] shop from Frank Smolle in November 1966.

Baz: Apart from ‘church’, the Dutch Reformed Church in Orange was ‘community’. After the service you’d go to a Dutch house for Dutch coffee. And they’d get a Dutch minister up from Sydney. The Manse was on the corner and behind the house facing Woodward Street, was an army hut from Cowra [the church]. At one stage there was a full-time minister.

stoof – a timber stool
Henny: “The stoof has a section underneath to place a metal or ceramic container filled with hot charcoal. It was used to put feet on in the large, cold Dutch churches. I brought it to Australia for sentimental value. It was my grandmother’s. She always took it to church; it was the fashion over there because it was so cold”.

wooden rolling pin
Henny: “This rolling pin was used by my husband at the Spring Hill bakery near Orange. Baz, our son, says, ‘it was part of the goods and chattels of the bakery when we bought it. I can still see Dad with his big hands.’ “