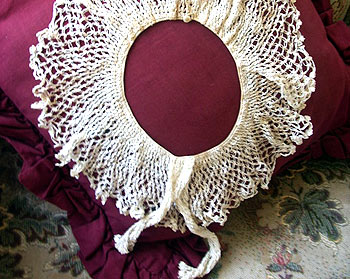 My parent’s families were Armenian. They fled Armenia in the early 20th century because of the persecution of the Armenian people by their Turkish rulers. They settled in Alexandria , Egypt and I was born there in 1923.

I can remember embroidering little gold coloured crowns on baby clothes for one of the King’s children.

My father established a business as a tailor in Alexandria. When I was young my mother died giving birth to one of my brothers. My father then closed up the business and worked from home. I used to help him with his tailoring – that is how I learned to be a dressmaker. When I left school I worked at a workshop making cloths and furnishings for very rich families. I did work for King Farouk’s family. I can remember embroidering little gold coloured crowns on baby clothes for one of the King’s children. I was a good dressmaker and made all my own clothes. I made the crochet collar to wear a number of outfits I had before I was married. To starch it I used boil up rice and dip the collar into the water and then dry it out and iron it – it was very nice. 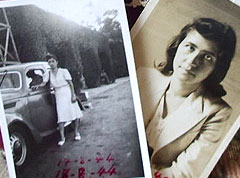 In 1945 I married my husband who was also a non-Egyptian living in Alexandria – his family was from Syria . I had five children over the next seven years – sadly my second child died and so I now have three daughters and one son.

After President Nasser came to power in 1954 many, many Christians left Egypt. By 1969 we really felt our position as part of a Christian and non-Egyptian minority. We decided to leave Egypt to find better opportunities for our children who were then aged 23, 19, 18, and 15 years old. Friends of ours had already migrated to Australia and they sponsored us to migrate. Without this family we could not have come here.

We travelled to Australia by air – on a Dutch airline. It was a two day journey as the flight was delayed in Jakarta, Indonesia. We arrived in Sydney on 9 March 1969 and the family who sponsored us met us at the airport and took us to their home in the eastern suburbs of Sydney.

When we arrived in Australia we did not have anything – only a bag each with clothes.

When we arrived in Australia we did not have anything – only a bag each with clothes. We could not bring furniture or decorations – the family who sponsored us told us not to bring anything as it would make problems at customs – so we left everything – I did bring in the bronze plate though. It was a very good quality bronze plate. I put it in my suitcase with my clothes. I wanted bring it here because it was something from my old life. I used to have it hanging on the wall in my house but my son who still lives with me says it doesn’t go with the other paintings we have. I keep it packed away in my room now.

It was very crowded – six people in a two bedroom flat – the children used to fight because it was so cramped.

About two weeks after we arrived in Sydney I found a two-bedroom unit in Hillsdale near Botany. It was very crowded – six people in a two bedroom flat – the children used to fight because it was so cramped. But I knew that the children would marry soon and leave home. In fact my eldest girl married 18 months after we arrived here.

When I first got here I couldn’t speak English. I got a job in an aerosol factory and went to English lessons. When I had learned English I got my job at Simona Couture in Kent Street in the city . I saw it advertised in the newspaper and I rang up and got the job. I worked there for 16 years, until I was 60 years old. I was very happy – they were good people and I earned good money. They liked my work and even after I retired they kept asking me to go back to work for them!

My husband was not so lucky. He was 14 years older than me so he was 60 years old when we came to Australia. He could only find labouring work which was very hard for him. He did not learn English. He was very lonely and homesick for Alexandria .

Over the years that I worked at Simona I saved and bought a unit in Eastlakes and when I sold that place I was able to buy this house also in Eastlakes- I bought my own roof over my head and I was very happy. I say, if you don’t work hard you don’t have anything!

decorative bronze plate
“The plate is about 12cm in diameter with embossed image of pyramids and sphinx. I brought it over from Egypt to remind me of my life there.”

detachable hand crochet collar
“The crocheted collar is made from natural coloured silk. I made the collar and used to wear it with outfits in Egypt.”