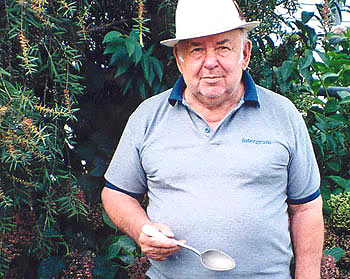 Bathurst for 2 weeks; Parkes for 4 months; and tent for male migrant workers at Emmco site in Orange for 4 months in 1951

My family had a farm in Latvia called Tumazani, which was near Kaunata in the Rezekne district. They had a mixed farm with cattle, sheep, rye, wheat and sugarbeet. I had one brother older than me – Peter – and a sister, Maria.

… in 1941 there was a big deportation to Siberia – innocent people were taken from their homes and put in cattle wagons.

In my young days until I was 14 I didn’t know any difficulties, any problems. My life was very promising. Then came the Russian occupation in 1940 and in 1941 there was a big deportation to Siberia – innocent people were taken from their homes and put in cattle wagons. Latvia was in the League of Nations but nobody helped us. And then on 23 June 1941 the Germans attacked the Russians in Poland. From the German border it took them three days to come to Latvia. Russians were running everywhere – it was hopeless for them to fight against the Germans.

My mother found me in the prison camp and that was one of the best moments of my life.

Then I had the privilege to serve under the English flag and my best army days were with the English. I was posted to Hanover and had to help investigate Nazis because my German, although not perfect, was alright.

I said: “Well, if you don’t want my parents you don’t want me and I will not go to Australia.” Then after a meeting the Consul said, “All right, we accept the whole family.”

Germany was divided into four zones and my parents were in the English zone in Soltau, south of Hamburg. I met my wife Wilma in 1949 and in 1950 we decided to come to Australia. Literature was given to us about the Bathurst area which sounded very promising. But before we came here there were difficulties. Wilma and I could come but my parents could not because of their age. And of course I said: “Well, if you don’t want my parents you don’t want me and I will not go to Australia.” Then after a meeting the Consul said, “All right, we accept the whole family.”

We sailed in the Nellie from Bremerhaven, an American financed ship which was transporting refugees from Germany to various countries. We arrived in Australia on 31 December 1950. The train to Bathurst was very poor quality with wooden benches and I thought to myself, even in Europe we don’t have any more of these trains.

In that heat, where there was no shade at all, it was impossible to be inside the tents.

Anyway, we came to Bathurst with winter clothes in mid-summer and we were put in tents. In that heat, where there was no shade at all, it was impossible to be inside the tents. After a fortnight we got an appointment to go to Parkes and I was working in the kitchen as a cook in the migrant camp there. There were up to 1,600 people in the Parkes camp but the numbers varied.

Wilma’s English was better than mine and she went to the camp employment office and asked where I could get a job under the two-year contract. The man said, ‘There is no more contract – you can go wherever you want, but we’ve got a job at Email [Emmco] in Orange . If your husband wants to go there he can start Monday’.

… there were a lot of building materials around and I said to Dad, I’ll go and get some nails and a hammer and we’ll patch up some sort of accommodation.

So I came here with my father that Monday morning and we came to the employment officer, Jack Lynch and his assistant Vic Byrne. I introduced myself as best I could – my English was not very good , but I understood English all right. Jack took me to a shed and gave me and my father a bed and a mattress and said, ‘follow me’. And we came to some tents – he showed us our tent – number 27 – and went. I opened the front and there was no end – it was all torn off. What do we do now? Anyway, there were a lot of building materials around and I said to Dad, I’ll go and get some nails and a hammer and we’ll patch up some sort of accommodation.

I was put in the refrigeration section [at Emmco] and my father was taken to a different section as a cleaner. The workers communicated in German as a lot of German was spoken. Many Polish people had lived in Germany for two or three years and I had lived there for four years. During dinner time I never went to ‘new Australians’ for company – I went to ‘the Australians’ to listen to the language.

There were about 80 people in the tents. The toilet, laundry and shower were about 400 metres from the tent. One good thing – there was plenty of hot water but the shower was a bit draughty.

I thought it would be wonderful to get a flat for Dad because he was over 70, but when we had worked at Email for four months we had already saved enough for a block of land in Tynan Street. We built a garage on it and lived there. And then we bought another block and built a house on it and rented the garage out.

I am still very loyal to my country – still a Latvian patriot, but I am thankful to Australia for being able to live here and to talk and argue.

aluminium serving spoon
“When we were at the Displaced Persons’ camp in Volferdingen, Germany, a man was selling things to make money. This tablespoon was made out of part of a German Stukars aircraft. People sold whatever they could to make money.”