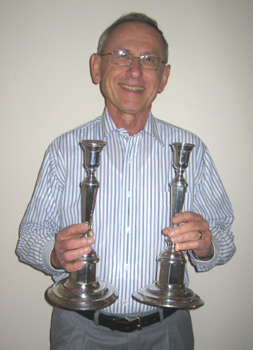 With my aunt and uncle in Carrington Road, Randwick

My mother worked as nanny for a Hungarian family and later I became an insurance clerk.

My mother worked in restaurants. I eventually became a chartered accountant, with my own business, and later a financial planner.

After my mother died three years ago, I knew I must go back to the place where my father was killed, back to Lubeck, in the north of Germany. This fob watch, with his initials engraved on the back, is my only tangible link to him. I felt I had to go there and witness where he died and find out his story for myself. I had a puzzle – How did he get there? What were his movements?

My mother had gone on a visit back to our village, Špačince in Slovakia, in 1978 when it was still under Communism. The watch had been hidden by friends of my parents during the [Second World] War and was looked after by an uncle thereafter.

Our family received one of about 13,000 exemption certificates given to Jews.

In 1942 the Tiso government of Slovakia literally sold two-thirds of all the Jews to Hitler: 60,000 people. Our family received one of about 13,000 exemption certificates given to Jews. For instance, more than half the doctors were Jews – if they shipped them to Auschwitz they’d be short of medical care – so they gave them exemption. My father was the wheat growers’ representative in the area – he was an economic necessity as far as they were concerned. Wheat was an important commodity.

Despite this, the government decided that the remaining Jews should hand in all of their valuables; everything was confiscated during the door-to-door raids. We lost all our vases, porcelain, silverware; everything was taken.

We were in the final roundup, first going into hiding until it was no longer possible…

Then in September 1944 the exemption certificates were cancelled. We were in the final roundup, first going into hiding until it was no longer possible to be hidden. We were arrested at the end of November and sent to a transit camp in Slovakia. From there my mother and I were separated from my father. We were sent to Theresienstadt, and my father, I found out much later, was sent to a slave labour camp in Germany.

My mother and I were liberated from Theresienstadt in May 1945. We went home to the village, to our house and found that it wasn’t safe for us there. We were the only Jewish survivors in that area and the local people resented us returning 1. I expected to be reunited with my father but that didn’t happen. We sold our house for a pittance and moved to an apartment in the nearby town, Trnava. We were alone, having lost all other relatives, aunts, uncles and cousins. Our only photos remaining from that time were retrieved by a neighbour from the rubbish tip. She saw that there were photographs amongst a pile of rubbish over the fence and managed to salvage a few. Many are dirt stained; but they are a precious memory to keep.

Jews came from everywhere and the synagogue was overflowing with people. I missed my father…

The synagogue in Trnava, where my parents were married in 1931, was badly desecrated during the war. After 1945 the government helped the Jewish community to restore it and also to add, the Martyr’s Memorial in front of it. The town had a large Jewish community pre-World War Two but only about 20 per cent survived. On 9 November 1947 there was a huge function to open the restored synagogue, attended by many officials from all over Slovakia. This is the original invitation. Jews came from everywhere and the synagogue was overflowing with people. I missed my father and knew that our family would never be complete again.

We left Trnava on the 15 November and came to Australia on the SS Partizanka in early 1948. It was easier to get into Australia than America and we had family there. I was nine years old. Before boarding the boat, we went through Prague for two days and my mother wanted to replace her silver Sabbath candlesticks. She also bought this vase.

…every time we came to a port, we weren’t allowed to get off the ship. No reasons were given.

We boarded the boat at Split (Croatia). It was a Communist ship and every time we came to a port, we weren’t allowed to get off the ship. No reasons were given. This didn’t bother us as we could still enjoy the more exotic places like Colombo and Aden. The local traders on their small boats would come up to the ship selling various gifts and fruit. They would set up a line and attach baskets and send the items up to the ship. I also remember going through the Suez Canal; it was very exciting for a nine year old.

There were other Holocaust survivors on the ship but we were a minority as there was still a very tight quota on Jewish migrants to Australia. Other migrants on the ship included lively people from Yugoslavia, Greece and various other countries. My mother found a foreign language dictionary and taught me how to say thank you, goodbye and hello in English. These were the only English words I knew when I landed.

These relatives used virtually their whole savings to sponsor our migration. It cost them over £150.

It was very exciting to arrive at the Overseas Terminal in Sydney. My aunt met us at the dock. Whilst we were waiting for our luggage to be offloaded, she took me for a walk and bought me an ice cream. We lived with my aunt and uncle in their small apartment for the first year. They didn’t have children and my uncle didn’t speak Slovak, only German and English. These relatives used virtually their whole savings to sponsor our migration. It cost them over £150. My mother had to repay them and had to work many extra hours to do this as she was earning just £4 a week at her daily job.

I was the only refugee boy in my primary school. I felt like quite an oddity there. I remember walking to school on the first few days with my mother several metres behind me, out of embarrassment. The boys were friendly and I know I learnt English very quickly.

My mother worked very long hours as a nanny for a Hungarian family. She attended evening English classes at the Macabean Hall, a community centre which is now the Sydney Jewish Museum.

After a year I was sent to boarding school in Liverpool. This was for financial and convenience reasons. It allowed my mother to work and not to worry about me. She got herself a room in a private home in Rose Bay, owned by an elderly lady who rented out her extra rooms. It was close to where she worked as a nanny. The school in Liverpool was cheaper than others closer to the city but still my mother worked weekends in restaurants to pay for it.

I came home only for school holidays and would stay with her but I was really on my own during the day. My mother was a very friendly person and through her, I met a boy who lived in the block of apartments where she worked. Sometimes I played with him and he knew all the places to go; we went around the streets together. Somehow those years still felt fairly lonely.

At age 14, I told my mother that I couldn’t stay at boarding school any more. I said I would look after myself. At that stage she was staying with another lady, a widow, and I suggested that I would go and live with her. Most of my friends went on to do their Leaving Certificate but I didn’t. I quickly became very independent.

I was left to find out everything for myself. On reflection, I really needed a male role model.

My first job was as a clerk in an insurance company. I worked hard and got promoted there and started doing some insurance exams. However, once I started to get on my feet, I realised this was not meant to be my future. Through speaking to the senior men at the insurance company, I found there were other options open to me. My mother didn’t know much about career options and I was left to find out everything for myself. On reflection, I really needed a male role model.

I decided to study accounting and began attending night school. I found I was good at it and got my next job in a chartered accountants’ office. I went on to do a chartered accounting degree. Some years later I established my own successful accountancy business. I sold it 20 years ago and went into business as a financial planner. This was until about three years ago when I sold that and became a consultant to the company.

My wife, Diane, is also a qualified accountant and worked with me for the last 25 years. She worked part time when our girls, Julie and Michelle, were growing up and then full time when they were older. They’re now 25 and 23.

Since 2000, I have been a volunteer guide with the Sydney Jewish Museum and am also the honorary treasurer on their Board of Management.

I have traced his footsteps through the war years and tell his story, until his death in the last days of the war.

When my mother was alive I was able to ask her to reconfirm my childhood memories and she helped me to understand the historical events. Many years later I started making notes and have now completed a book called: In Search Of My Father 2. Through great perseverance, I have traced his footsteps through the war years and tell his story, until his death in the last days of the war. This has been a most satisfying experience greatly assisted by my wife and daughters.

Footnotes
1. Anti-Semitism was common; there was concern Holocaust survivors would claim back their land and property.

2. In Search Of My Father can be purchased through the Sydney Jewish Museum shop: www.sydneyjewishmuseum.com.au

fob watch
“The watch has my father’s initials engraved on the back – JD. It was recovered after WW2, then kept safely during the Communist takeover and brought to Australia in 1976. The watch still works!”

candlesticks and vase
“After the Tiso Government had confiscated all our valuable belongings, my mother bought these in Prague on our way to Australia.”

invitation to synagogue reopening with new memorial
“My parents were married in this synagogue that was desecrated during WW2. This is an invitation – in Slovak – to its unveiling and dedication to the Martyrs Memorial erected in front. My mother and I attended this event on 9 November 1947. “