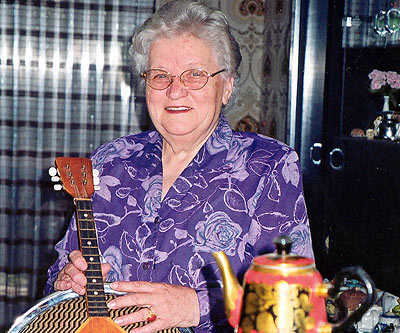 Pantry of the maternity ward at Orange Base Hospital

I was born in Lisichansk in the Lugansk district of the Ukraine but my parents were Russian. My father died when I was three years old and my mother lived with me and my sister Raisa, who was one year younger than me. My mother had six sisters and they helped her. First she worked as a waitress in a restaurant. There was a coal mine called Voikov and we lived there. We had a two-storey house. Then we were told people had to leave their home if they weren’t working in the mine. So my mother went to work in the mine.

On 22 June 1941 at 4am, Kiev was bombed by the Germans. We went to our Babushka’s house in 1942. As soon as we came to the village, the Germans came. In February 1942 my sister had pneumonia and she died aged 14. The Germans took me to Germany in October. I was not quite 16. All the time we were hiding from the Germans. We were hiding in the roof – me and my friend. When everybody was asleep my aunty and Mum called us and we would eat and sleep. Then one day the police knocked on the door in the night-time. They found us and told us ‘tomorrow you come to the office’. They checked us for health and said I would be going to Germany.

There was a very big camp with an electric fence and they put us in a barrack.

They took people from all around the town and villages in a freight train. We were taken to Luzk. Everybody got out of the train and we went into a building and they told us to strip off. They brought us to a very big shower room and we had nice hot showers. They gave us something to eat and they put us back on the train to Wuppertal. There was a very big camp with an electric fence and they put us in a barrack. There were no mattresses – you just lay down on a wooden bed. Then they took us in a building and they were taking people to work. A girl told us girls were being taken as prostitutes so some of us hid in the toilets.

Later they took us to Velbert and put us in another barracks and locked us up. After a little while they took us to a factory – Schweppers – making locks. We were paid about three marks a week so we couldn’t buy much – only tooth powder and cards to exchange with the other girls. The barracks used to be a theatre. There were doubled-decker wooden beds. Everybody got a blanket and we had a mattress filled with straw. In winter when it was so cold and there was only one little stove, my friend and I slept in a single bed to keep each other warm.

When it was cold I said, ‘Come on, I teach you dancing’.

When we came for work they gave us a plate with spinach or kohlrabi and one little piece of bread for three days, a little bit sugar, maybe a little bit butter. When it was cold I said, ‘Come on, I teach you dancing’. One girl had a harmonica. One day I was picked to work in a woman’s house on Sundays. In the house the woman started to feed me rabbit and vegetables but they weren’t eating any meat. When I asked why they said ‘We cooked that meat especially for you’. They also gave me a ration card to buy bread and the baker gave me bread and potatoes. I went to that Frau every Sunday. I would share the bread with my friend Nina.

I was working sorting coal in that camp for about 11 months in 1944.

Then I ran away to another camp. Some girls there told us they were going to a dance. I met my future husband, Michael, who was a Ukrainian, at the dance. I was working sorting coal in that camp for about 11 months in 1944.

Then the war finished in 1945. Our barracks was burnt so we slept in another barracks. First came the Americans and took us in a truck and my boyfriend Michael to another town to a very big camp. They took all the Polish people to the Polish camp. My boyfriend and Anna’s friend Ivan made a hole in the fence and escaped. My boyfriend’s mother was Polish and he spoke perfect Polish. Then we came to the Polish camp and they asked me if I was Polish. One day they announced people who wanted to go to Belgium would be taken there. They took us to Liege in Belgium in American trucks. Michael worked in the coal mine six years. In Belgium they started advertising for people to migrate.

We arrived in Melbourne on 23 April and were taken by train to Bonegilla camp.

We left Brussels for Gluckstadt, Germany, on 4 January 1951. Michael and I had not been married because of the confusion in the aftermath of the war and were married in Gluckstadt. His surname was Koruniak. We sailed on the ship Fairsea from Bremerhaven on 7 March with our son Victor. We arrived in Melbourne on 23 April and were taken by train to Bonegilla camp.

Bonegilla was just paddocks and a lagoon. My husband was disappointed.

On the train journey to Bonegilla everyone was pointing out all the sheep. I couldn’t see any sheds for the sheep like they have in Russia [because of the cold winters]. Bonegilla was just paddocks and a lagoon. My husband was disappointed. It didn’t look nice – no town or anything. When we went to a paddock to pick mushrooms we saw some dead cows but nobody buried them.

The men chased the rabbits and killed them with sticks, then strung them on a pole which two people carried on their shoulders back to the camp.

They gave us lamb chops to eat at Bonegilla. I said, ‘Look how much fat is on it’. We didn’t like it. We’d buy a little bit of food from the store and cook it on a primus. We also went to catch rabbits to eat. The men chased the rabbits and killed them with sticks, then strung them on a pole which two people carried on their shoulders back to the camp. Then we cleaned the rabbits and cooked them. They were very nice to eat and not fatty.

We were in the Bonegilla migrant camp only about a month when I asked if I could go to Orange to visit a friend, a lady I knew from Belgium, Vera Shlonsky.

I showed a woman the address and I was shivering. She took me inside and gave me a cup of tea and biscuits.

My husband and son remained at Bonegilla and I went by train to Orange. I walked from the station along Kite Street up to Sampson Street. I was looking for a lot number. I’d arrived at 5am, it was May and so cold. Then I walked along Sampson Street to Dalton Street and went back again because I couldn’t find the number. I showed a woman the address and I was shivering. She took me inside and gave me a cup of tea and biscuits. Then she walked with me to show me the lot where Vera lived. Then Vera came and said she’d take me to the Base Hospital maternity ward [for work] and they put me to work in the pantry.

Then I went back to Bonegilla to tell them I had a job in the Base Hospital . They said, ‘You take your son but your husband has to stay at Bonegilla to help the new migrants for one month’. I came back here with my son. There were other migrant women working there [at the hospital]. It was very nice working there – I was there for two years.

When my husband came to Orange he was put to work in Emmco. When there were mass lay-offs at Emmco in1952 [because of a severe economic downturn] my husband worked at Wallerawang.

Later my husband became a builder. We bought a block of land in Sampson Street and we built a little house.

Later my husband became a builder. We bought a block of land in Sampson Street and we built a little house. Then we divided the land in two. My husband died in 1963. I worked later in Bloomfield Mental Hospital and then the Café Popular. Then I bought a little shop at 159 Peisley Street in September 1959. It was a general store. I sold sandwiches, smallgoods, milk shakes, tea sets even. I sold it in 1995.

collection of postcards
“These postcards were sent to me after I had been deported from the Ukraine to Germany as forced labour. The girls used to exchange cards with one another in the camp and my cousin would also send me cards from Munich.”