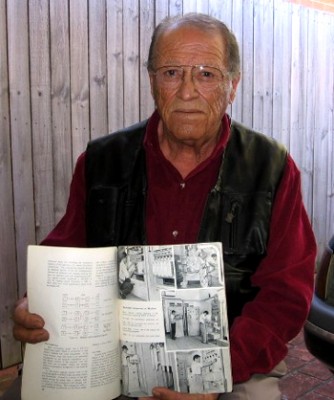 Telecommunications work at Standard Telephones and Cables in Botany, SE Sydney and the TAB in Ultimo, Sydney.

I was born on 3 January 1934 in Kirkuk, Iraq. Kirkuk was one of the first oil industry towns in Iraq and was started by the British in 1928. When I was around six years old we had to leave Kirkuk as my father had an ulcer and was advised by his doctor to move away. We moved to Baghdad where my father worked as a manager at a supermarket chain in one of the oil power plants. The plant provided oil from Kirkuk all the way to Haifa in Israel. They were known as ‘The K Lines’. My father worked at the largest station, K3, which was out in the middle of the desert. We stayed at K3 for the duration of World War Two.

Our living quarters, which were supplied by the company, were beautiful and we had three large bedrooms. The houses were built of local stone and everything was provided, such as furniture, linen, crockery and cutlery. We had hot water 24 hours a day and could shower whenever we wanted to. The homes were heated during the very cold winters. We lived very well there.

“The war is over and we are going back to England so you can take all you want.”

I was 11 when the war ended. The British base was about a kilometre away [from] our house, and I can remember one of the soldiers calling me to a sports hall one day and pointing to all the sporting equipment that lay there. He said, “Go on, take a football, hockey stick – whatever you want! The war is over and we are going back to England so you can take all you want.” I didn’t need to be told twice. I called my brother and soon every kid in the area knew of the find. The hall was quickly emptied.

The British soldiers pulled out but other British remained there for the pipeline. My father was moved to K2 and as there was no accommodation for families there, we had to go to Baghdad. We attended school for three or four years [there] until my father was moved to the Basra Petroleum Company in [the] south, at the head of the Persian Gulf. That was in 1948 and I was 14 years old.

…I went to evening school. The [British] Royal Air Force had a job going in Basra so I applied.

I wanted to obtain an apprenticeship with an oil company so I went to evening school. The [British] Royal Air Force had a job going in Basra so I applied. They needed a junior clerk and I had to do some typing and general office work. I remained there for ten months until my father got me a job as a communications apprentice at the Basra Petroleum Company.

In 1954, the company sent me to Tripoli in Lebanon for more training on the equipment, and then again in 1956. I completed further training in England in 1960, and again in 1967. I was very well trained by then in telecommunications, which covered a wide area including telegraphy, telex and receivers.

One day in 1954, a photographer came to the company and photographed us…

The Basra Auto Radio System, a book, has a photograph of me working in the equipment room. One day in 1954, a photographer came to the company and photographed us for the book. In England in 1967, one of the engineers said to me, “You know there is a journal about your company?”, and he arranged to give me a copy. It is a very good memory of those days in Iraq.

When I was in England I could see that their way of life was very different to Iraq. It was not pleasant living in Iraq as an Assyrian as we were Christian in a predominantly Muslim country. In the workplace I found that I was increasingly being discriminated against, losing jobs for which I was qualified because I was Christian.

…we had been free to follow our own religion but once the country became independent, that all changed.

I married when I was 25 and we had three boys. Under the control of the monarchy, we had been free to follow our own religion but once the country became independent, that all changed. The British had democracy, freedom and a good way of life, and it became my goal to some day live such a life. I spoke of it to my younger brother who took a chance and migrated to America in 1961. He has lived there ever since.

…there was no way out of Iraq. No passports were being issued. It was at this time that we found out my wife had breast cancer…

During my training in England, I saw a lot of advertisements about Australia showing the way of life, the beautiful country, the special weather and beaches. It was then I applied to come to Australia. I was given permission but as my family was still in Iraq, I needed to get them to England first. That was impossible as the Six-Day War with Israel was on and there was no way out of Iraq. No passports were being issued. It was at this time that we found out my wife had breast cancer and so we could not be considered for migration.

My father, sister and brother migrated to Australia in 1969 but my mother stayed behind to help care for my wife and three boys. [We had returned to Iraq.] Sadly my wife passed away from breast cancer and after her death I finally came to Australia with my mother and sons, who were aged nine, five and four.

I had notified my family in Australia of the death of my wife and my father went to Canberra to plead my cause. All was fine and we received permission to migrate. We left Iraq in March 1971 and travelled by plane to Kuwait, where we stayed with a friend. On 21 March we left Kuwait by plane. We stopped in the Philippines overnight and arrived in Sydney the next morning, on 23 March 1971. I felt a great sense of freedom as we arrived and hoped that our lives would change for the better.

They were surprised that I spoke English and knew about telecommunications, so no examination, no test, nothing.

My father had purchased a house in Ainsley Street, Fairfield West and we all lived there until 1988, when I sold the house. My first job in Australia was with the Postmaster General’s Department (PMG). I obtained the job the day after I arrived; I arrived on Sunday, I applied for the job on Monday from the unemployment office in Fairfield. I remember the first man I met, he was in charge at PMG, he said to me, “When did you come to Australia?”, and I said, “Yesterday”. I said what I knew. He said, “Oh my God, you know about 75 model so and so?” I said, “Yes, I worked on that for nearly 20 years”. They were surprised that I spoke English and knew about telecommunications, so no examination, no test, nothing.

The job was in Railway Square near Central Station in Sydney, and it was the New South Wales repair centre. They had a very large workshop there and employed about 30 technicians. After a while I got sick of sitting in the same place every day for work so I left after 18 months.

My next job at Standard Telephones and Cables (STC) in Botany allowed me to do outside work and I travelled extensively all over New South Wales. The job entailed installing machines [and] I stayed at STC for two years. From there I went to the TAB in Harris Street, Ultimo and remained there until my retirement in 1989.

Later I was Director of the Nineveh Club, which has about 1,600 members…

My retirement is taken up with various activities as I am a very social person. I was a founding member and Director of the Assyrian Sports and Social Club in Fairfield Heights in the 1970s. Later I was Director of the Nineveh Club, which has about 1,600 members and caters for all nationalities. One can eat Assyrian foods there, amongst other types.

This country adopted my three sons and we are all living happily here. We have freedom.

I have no intention of ever returning to Iraq. There is nothing there that I want and there is plenty here that I do want. This country adopted my three sons and we are all living happily here. We have freedom. What’s the use of a large home when one has no freedom? I have never been back to Iraq and I never will. Why should I?

I have a handmade quilt which was given to me in 1978 as a gift by my mother-in-law in Iraq, in memory of her daughter, my wife, who passed away. It is the traditional quilt of the Assyrian culture. It is made of squares of different coloured fabrics which have been handstitched into a wonderful bedspread. I now use it on my bed. It is a treasure that reminds me of my old home.

Assyrian quilt
“This handmade Assyrian quilt was given to me by my mother-in-law in 1978 in memory of her daughter, my wife, who passed away. I now use it on my bed. It is a treasure that reminds me of my old home.”

book
“The Basra Auto Radio System contains a photograph of me as a young trainee in 1954 and I was given it [when working] in England in 1967. It is a very good memory of those days in Iraq.”

book
“The Basra Auto Radio System contains a photograph of me as a young trainee in 1954 and I was given it [when working] in England in 1967. It is a very good memory of those days in Iraq.”