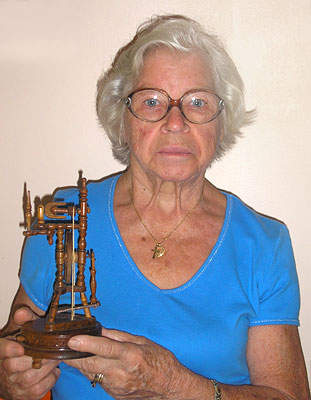 My brother-in-law had us booked into a guesthouse in Murwillumbah, Tweed Valley, NSW.

I was a mother at home with a growing family. My husband Tony was employed with his brother at Hanna Building Industry, Murwillumbah ’til his retirement.

I was born on 12 June 1931 in a town called Dravograd on the Yugoslav and Austrian border. I have been in my present home in Murwillumbah for the past 39 years [and] have been in the Tweed Valley for 52 years. My father’s name was Hans Rottman and my mother’s name was Maria Jerosheg. We had a big house that my grandfather bought for my mother and he lived with us. My mum’s father was a cobbler and they didn’t have much money but they always had enough to eat: meat, brown bread and whatever they could grow. But that all stopped when my grandfather passed away.

Miran would hear [my brother] Fritz playing the harmonica and would come and join him. They would sit on the grass outside and play and we would sing…

My childhood was happy and my brother and I had chickens and we never bought eggs. Mum was a good cook and often cooked for the doctor’s family. The doctor’s son, Miran, loved my mother’s cooking and would rather eat at our house than his own. My brother, Fritz, played the harmonica. Miran would hear Fritz playing the harmonica and would come and join him. They would sit on the grass outside and play and we would sing, even Mum and Dad. The time for a song was special. Nobody told us to pack up and go to bed. All that was before the war between Yugoslavia and Hitler taking Austria.

Palm Sunday, April 1940: we could hear gun shots and packed a few things in a hurry. That night we walked to hide at a farmer’s place. After a few days we returned and found our house ransacked. My brother was called up to the ‘workforce’, at the same time training for war from which he never came back home. It was Christmas 1944, a sad message [stating her son had been killed was received] and it made Mum very sick and she had to be admitted to a nerve clinic.

Mum told the guard a little white lie that her brother was working over the border and had fallen ill, and could we go and see him.

It was 5 May [1945] that Dad decided it was time for him to clear out. Later we got a message from Dad to escape. Mum and I were trying to make it illegally over the border but were stopped by a young man we knew. His name was Eddy, my brother’s age. They both got listed into the German army and to the same unit, Panzer Grenadier. That young man advised us to go to the main border crossing. He witnessed, the day before, a woman who got shot in the leg for retrieving her cat that wandered through the fence. Mum told the guard a little white lie that her brother was working over the border and had fallen ill, and could we go and see him. We had to see the officer on duty and luck was on our side. He said, “Yes, you can go, but be back in two hours.” Of course, we didn’t come back.

From the time he left, Dad was at Kogler’s. Well, Kogler was pretty big and was well known all over Austria and Italy for timber import and export. They had a hotel and three big farms and we stayed there for three years. It was on Sunday 16 May 1947 that Dad fell ill and was operated on but he died 11 days later. The workers at the mill made a collection to pay for the funeral and hospital.

… we had a baby girl [on] 23 September 1950 named Maria Isabelle Annie. I can remember one of my mother-in-law’s neighbours telling everyone that Tony’s wife had triplets.

I married Tony Iwanuscha in September 1948. He was from Leskavoac in Hornwuld, Yugoslavia. He promised Mum that he would look after me. Our first baby, a boy, was born on 22 October 1949 and the year after we had a baby girl [on] 23 September 1950 named Maria Isabelle Annie. I can remember one of my mother-in-law’s neighbours telling everyone that Tony’s wife had triplets. After ten years working for Kogler, Tony thought there must be something better somewhere else. His two brothers, Joe and John, and sister came out to Australia with their families. Tony’s thoughts were more here than at home, so we started all the proceedings that were necessary, with the doctor’s check-ups to come to Australia. We had to travel by train to Villach and by bus to a camp where all the immigration dealings were. It took about four months when all the paper work was done. When we got the answer back we packed and started to sell a lot of stuff because we had a limit on weight.

It was much harder for me, leaving my mum. She was on her own, only 53 years of age, but had not been too well and it was a big shock for her never to see her grandchildren again. She begged my husband to stay, but it was all faith and meant to be. Mum kept herself busy working, cleaning and cooking for Baron von Cassatti and his wife. They were very rich, no kids, but had four greyhounds that were treated better than a lot of people we knew. It was a sad day when we said our goodbyes at the railway station in Gras, [Yugoslavia], throwing kisses and waving ’til the train pulled out of sight, with us still trying to stop the flow of tears.

Meals were good at first but started to change the further we got from port, and whenever the ship docked we bought fruit…

We started to board the Skaubryn on Friday 27 May 1955, the tears I could not stop. First we were taken to a cabin, it had three double bunks in it and one cot. We shared the cabin between three of us women, four children and one baby for nearly six weeks. The kids and I had not left the ship ’til we reached Fremantle. Women were separated from their husbands or boyfriends. Meals were good at first but started to change the further we got from port, and whenever the ship docked we bought fruit from the little boats alongside. I remember a wild storm and seasickness set in but the kids were alright. As for my husband, I had not seen him for days on end. He was too busy looking after the machinery. It was during this time that we witnessed a burial at sea for a young girl; very sad, lots of tears.

The ship stopped in Fremantle, then docked in Adelaide. We caught the bus to Melbourne, then a bus to Sydney and then a train to Tweed. There were no overnight stays anywhere. We all settled down on the train and got cosy and managed to get some sleep. On the bus, my little son was sick, so I didn’t manage to sleep on that journey.

It was very hard with the language as ours was very limited, but we were taken in as long lost friends…

We arrived at Murwillumbah on 3 July 1955, and were greeted at the station by my brother-in-law, Joe, his girlfriend, now my sister-in-law, and her Aunty Bessy. Everything was very nice and we were very happy to feel firm ground under our feet. It was very hard with the language as ours was very limited, but we were taken in as long lost friends and that made our coming to this town much easier. My brother-in-law had us booked into a guesthouse called Sunnyside. We stayed there for one month, then a house in River Street became vacant, it was number 89; a big roomy house for rent where we lived for 12 years and where my four other children were born.

The one thing that upset me when we came to Murwillumbah was the ‘Wild West’ look. The town still had the wooden posts and rails where they tied up the horses, just like in the movies. That really made me homesick, but I wouldn’t have gone on another ship trip to get away and, in time, all that started to change for a neater look.

Joe, my husband’s brother, had a job organised for Tony [at] Hanna Building Industry. Tony worked [there] first as a labourer but it wasn’t long before he stepped up the ladder and became leading carpenter for 17 years. He was hurt building the fire station and had two back operations in Brisbane. We had to wait a long time for compensation.

Life was busy, but good, and a free feeling and we were young.

The first years in Australia, 1955-56, were very hard for me. I couldn’t speak English and when I went shopping I had to write everything down. Once the two children started school I learnt a lot from them. Things started to get easier, year by year, and another thing was the summer and the heat; I spent just about the whole day in the bathtub, [keeping cool]. We came to Australia in winter but I had trouble to keep my two kids out of the river. They just wanted to go for a swim, they told me over and over again. We also grew some vegetables, potatoes, tomatoes and had our own eggs. While still living in River Street we have gone through a couple of floods, lost a few chickens, the water came up very fast and we had to put about a dozen ducks into the bathtub! Life was busy, but good, and a free feeling and we were young.

I was naturalised on 22 July 1963 in Murwillumbah. I am very happy enjoying my old age and every day is a bonus. We had six children; three boys, three girls. From six children I now have 16 grandchildren, and six and a half great grandchildren.

musical spinning wheel
“This spinning wheel was given to me by one of my favourite cousins, Egon. He made it for my 16th birthday. When you wind it up it plays a well known Yugoslavian song about a girl who spins extremely well and if a man were to find a girl like this, he would be a lucky man indeed! My cousin was such a good carver; he had epilepsy so he didn’t work, but he carved the most beautiful things, with lots of tiny detail – just beautiful. It is very special to me so I will keep it always and pass it on to one of my children.”