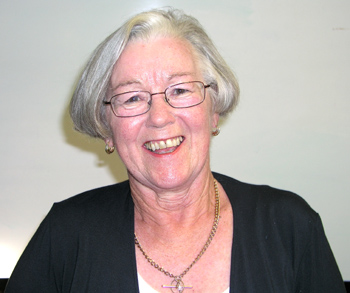 I stayed with my in-laws in Melbourne for 3 nights before going to their home in Wagga Wagga.

Secretary in a furrniture store, Albury

Legal and medical secretary in Albury

My name is Nan Jacobs, I was born on 5 August 1942 in Glasgow [Scotland]. I had a happy childhood with one older brother and one younger brother. We also had two sets of aunties and uncles with no children so we were indulged a lot, we never went wanting.

After I finished school I worked for a multinational company, whose forward thinking saw me in the highlands of Scotland on a personal development/motivational course – not for the fainthearted! They also sent me on a week’s visit to Head Office in Holland. Perhaps they thought I would stay with them until retirement.

The thought of Australia horrified me, it seemed like the end of the earth!

I went to Italy each year for holidays as a young woman, seeking the sun and chasing the men. Needless to say my friends and I had lots of fun. I had plans to go to Canada for a few years, but one very cold night I met a “big Aussie” at a work function and my life changed. The thought of Australia horrified me, it seemed like the end of the earth! It was not a desirable location, even New Zealand had more appeal.

We married on the Friday and set sail the following Thursday…

My wedding was our farewell do! I was 24 years old. We married on the Friday and set sail the following Thursday, 23 March 1967. I was excited about my adventure, filled with anticipation and more than a little trepidation. I didn’t come out as a £10 Pom, I was on A-deck on my honeymoon.

When I arrived in our cabin it was filled with flowers, all daffodils to celebrate spring.

The hardest farewell was leaving Scotland, saying goodbye to my family, close friends, work colleagues and neighbours, people I’d known all my life. We came down from Glasgow in the overnight train, we had so much luggage. When I arrived in our cabin it was filled with flowers, all daffodils to celebrate spring. I remember being on the deck as the ship departed, watching as Britain receded into the background, becoming smaller and smaller. It didn’t really affect me because I had said my goodbyes in Glasgow and was now on my way to a new adventure.

The trip out was wonderful, it was a four week voyage and we dined with the navigator every night. We had some delightful conversations and sometimes even heated discussions. I had so many new experiences. I had fresh pineapple in Kandy, Sri Lanka like nothing I’d seen before or since. India was extremely interesting [and] where we stopped was called Bombay then. Finally, we arrived at Perth, my first look at Australia. I loved it and could have unpacked my suitcase and stayed.

When we docked in Melbourne, my new family were there to meet me.

We arrived in Melbourne on 21 April 1967, so I have now been 40 years in Australia. When we docked in Melbourne, my new family were there to meet me. My mother-in-law, father-in-law and sister in-law, this was the first time I’d met them. It was all very exciting.

We all stayed in Melbourne for three nights, then travelled to Corowa to meet another sister-in-law and then onto Wagga Wagga where my parents-in-law lived. I did not believe there was a town called Wagga Wagga! I thought it was a joke at first, this mythical place. When we arrived at Wagga, I was a bit of a celebrity. A little boy told his Mum he had met me and that I spoke Scottish!

I stayed with my in-laws … they were lovely people and I felt an immediate sense of belonging.

This was a very happy time. Then we got a telephone call from my husband’s company to say that we were being moved to Singleton. He went on ahead to find somewhere for us to live and familiarise himself. I stayed with my in-laws and this was our getting to know you time. They were lovely people and I felt an immediate sense of belonging. Soon, my husband returned to pick me up.

We travelled by train to Singleton stopping in Sydney on the way. I remember seeing the Sydney Harbour and thinking, “Yes, this is everything it’s cracked up to be”. I wrote postcards from Sydney to my family and friends in Glasgow. When we finally arrived in Singleton on an ‘old rattler’, it was night and pitch dark on the platform. My husband had to go and get the key while I stood on the platform waiting alone, in the dark, with my worldly goods; three suitcases, a cabin trunk and two tea chests. I felt as if I had come to the end of the world.

…the locals were so very friendly; providing directions, giving lifts and a tour of the town.

The next day, the locals were so very friendly; providing directions, giving lifts and a tour of the town. I was overwhelmed by the kindness of these people. That night we had an unexpected guest; a Scottish lady who had lived in Australia for 25 years and simply turned up to offer some support. Every day someone called to say ‘welcome’.

My husband came home on the Friday night with some unexpected news – we were moving to Albury. I didn’t even have time to say goodbye to these lovely people, we were gone by the Monday morning. I was disappointed to leave but in one way I thought it was going to be better; closer to Wagga and a much larger town. I thought life in Albury was going to be very sweet, but alas it was the beginning of the loneliest time in my life.

The people living in Albury were either locals, Bonegilla migrants or from the army base. I felt I belonged to neither of these categories. Perhaps it would have been easier if I had initially lived in a migrant centre. At least I would have been amongst people who shared my loneliness.

In retrospect, the invitations were no doubt sincere. It is just the Australian way…

The ‘locals’ were different from the folks back home where in Scotland an invitation would have been made to come for coffee on a definite day and definite time. In Australia, the occasional invitation was extended but never saying when or where! In retrospect, the invitations were no doubt sincere. It is just the Australian way and I must confess after 40 years I have been guilty of saying to a newcomer, “Come and have a cuppa”.

Getting a job was difficult – it was a case of who you knew not what you knew. It took some time to find something appropriate and unfortunately this job did not offer the social connections and opportunities I was used to.

…the temperature soared to 114°C and the flies and mosquitoes feasted on my sweet Scottish blood.

That first year was awful. We lived in a rented flat, facing west with no air-conditioning and that summer the temperature soared to 114°C and the flies and mosquitoes feasted on my sweet Scottish blood.

My circle of friends started to expand once we had bought our first home and more so after the birth of my daughter Alison. My first visit home to Scotland was in 1975, when Alison was almost five, and I don’t think I was ever really comfortable in Australia until I had returned from overseas.

On our return, the neighbours came racing in to see us, the phone rang [with] friends calling to say, “Welcome back.”

When I came back to Australia, I could not believe the thrill I got, flying over the Hume Weir thinking, “I’m nearly home.” Australia had become my home. On our return, the neighbours came racing in to see us, the phone rang [with] friends calling to say, “Welcome back.” I couldn’t believe how many friends I had made in Australia until I came back from Scotland.

So when my marriage broke up two years after my visit to Glasgow, I knew I would stay. There is no doubt in my mind if I had not visited Scotland in 1975, then I would have gone back to Glasgow in 1977 never to return. I live in Australia, I love the country, the climate, the people and feel I’m a very good quasi-Australian.

My circle of friends is fuller now than ever before and occasionally when I’m in the mood and have a friend over I dust off my “wedding china” and we have a cup of tea.

I still live in Albury and have the pleasure of seeing my four Australian grandchildren on a regular basis. My circle of friends is fuller now than ever before and occasionally when I’m in the mood and have a friend over I dust off my “wedding china” and we have a cup of tea. Or like Aussies do, a nice cold beer.

wedding china
“This is my ‘wedding china’. In Scotland it is traditional for the bridesmaids to give the bride china. My bridesmaid gave me a beautiful porcelain dinner set.”