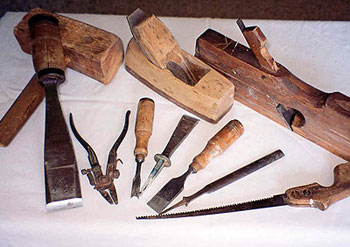 Henny: I was only 11 when the war [WW2] started. We used to have a shelter for four or five families in the neighbourhood. I can remember that my aunty and uncle were visiting and we had an outside toilet and aunty had gone to the toilet [when there was an air-raid]. We all dived under the table. Aunty came in and said, ‘Oh, you should have seen it when the plane exploded’. Uncle said, ‘You should have been here. I was talking to all these people and all of a sudden they all disappeared’.

We saw this little rocket and two or three minutes later there was a terrible noise.

I can remember the first V1 coming over [a rocket used by the Germans]. We were all standing around shivering and shaking. We saw this little rocket and two or three minutes later there was a terrible noise.

Everything was on coupons and we were lucky because we were in the country. My father was a labourer working on the threshing machines and he used to come home with beans and other things and we grew vegetables.

Bill: I was 16 when war broke out in Holland in 1940. After the war Holland was devastated. Just before the war ended the Germans blew the dyke and three villages and 500 farms were all under water. The water was up to the level of the first floor at our house. By Christmas 1945 it was dry again but you couldn’t live there.

Tradesmen were never allowed to leave Holland until 1948 or 1949.

Tradesmen were never allowed to leave Holland until 1948 or 1949. The government did relax the rules a bit but tradesmen had to pay their own way.

In 1949 we wanted to go to South Africa. Then there was an election and apartheid and I said, ‘Henny, I don’t like the look of it’.

We had cabbage and carrots – we never had anything else.

Henny: We were married in 1948 and John, our son, was born in 1949. Bill said, ‘How would you like to go to Australia ?’. We arrived in July 1951. We came by plane. We came early Friday morning in Sydney. They took us to a camp. They brought us to a railway station and put us on a train at 9 o’clock to the Kelso camp. We got a room in a hut and Bill had to get blankets and food. We were there for three weeks. We had cabbage and carrots – we never had anything else. One day they added some rice and raisins to John’s cabbage and carrots but then they put liver and onions on top – for a baby!

Bill: They got me to do a trade test and I got through that all right. We heard of work in Orange and Jack and I sat on the back of a coal truck to Orange. I worked at two properties just outside Orange for a short while, leaving Henny at Kelso camp at first; later she joined me.

The house we got on the farm was absolutely bare… nothing but a stack of Women’s Day and Women’s Weekly we could not read.

The house we got on the farm was absolutely bare: no table, no chairs, no bed, nothing but a stack of Women’s Day and Women’s Weekly we could not read. The boss arranged a £40 credit with Leahey’s general store and Leahey’s furnishing. I bought some wide hessian, stitched it together with twine, filled it with chaff and that was our bed on the floor. I also had to buy a pressure lamp which ran on kerosene.

Having no radio or anything we just tried to start reading. We taught ourselves the language quite well in the three months we were there. You get the meaning of one word, then you get lost, pick up a word somewhere else and the following night start all over again.

After moving to Carathool to work on another farm for a while, we returned to Orange where I established my building business in 1953, firstly with two other Dutch migrants, one of whom was Joe Runeman and the other Mr Schaapman. They had all been working for a builder who had been making kit homes for the Housing Commission. When that work folded, they started making fences for the Canobolas Club in Orange and that led to other work. I finally went out on my own in 1956 and continued in the building industry for the rest of my working life.

The Dutch community consisted of Reformed (Protestant) Church and Catholics. We used to have parties on Saturday nights at the CWA Hall then dances at Allcorn’s. A Jewish businessman was our leader – Herbert Frank. He said why don’t we all join the Good Neighbour Council so the Dutch [social] community was disbanded. The Good Neighbour Council was all new Australians and we would meet once a month and we would have dances.

family mementos
Henny: “The Basaltware teapot, jug and bowl were heirlooms from my great-grandmother. It was always in grandmother’s china cabinet. The silver spoons were used for cream and sugar. The cufflinks were made of Dutch coins in defiance of the Germans because they had Queen Wilhelmena’s head on them.”

carpentry tools
Bill: “The tools were all mine – two planes, a wooden mallet, chisels, a saw and a saw setter. I used them in Holland and then a little bit in the beginning in Australia until more modern tools were available.”