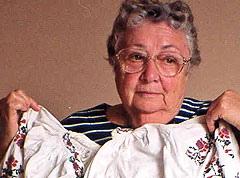 Helen: Bathurst for a year, Parkes for a few weeks

Helen: I was born near Osick of German descent but Croatian nationality. After the war [WW2] my parents and brother and I ran away from the communists. We got to Austria but the Russians caught up with us. Then we were sent back to Croatia. We ended up in a concentration camp. I was only 11. We were in the camp for a few months. Then they put us in cattle wagons and took us back to Austria. We were lucky – some went to Siberia.

We applied to emigrate to go to any country. I knew a little bit about Australia from lessons at school.

Back in Austria we got on a train and sat on the couplings. A man employed my father who was a wheelwright. We were there in one room. We had three beds, one wardrobe, one table and a stove in the corner. We stayed there until 1949. Then my brother got an apprenticeship as a bricklayer in Graz. We applied to emigrate to go to any country. I knew a little bit about Australia from lessons at school.

In the night time they got us off the boat and we travelled all night by train to Bathurst migrant camp.

We sailed from Naples [Italy] on the SS Jumper, an American ship. We came to Sydney via the Suez Canal, Aden and Colombo. We got to Sydney in the daytime. In the night time they got us off the boat and we travelled all night by train to Bathurst migrant camp. I was given hot cocoa and afterwards we got breakfast. Then my father got a job at Emmco in Orange and he lived in ‘Tent City’ until we built that little garage of ours. My brother was sent to Berrigan. Mum and I were sent to the camp at Parkes (I was 16 by then). I went to Parkes High School until they broke up. After Christmas I got myself a job at the Broadway Hotel at Parkes as a waitress. Within 10 months I was head waitress.

The house at 23 Dalton Street [Orange] had first a temporary dwelling, then a lean-to on it and eventually a house which was double brick. My brother and father built the house. Then I got a job in the Woollen Mills, then Jim’s Cafe, then a job in a grocer’s called Buttles. I learnt English by correspondence.

Sam: I was born at Pereslenia near Kiev [Ukraine]. In the war I was taken in 1943 for slave labour when I was 15-16 years old. They put us in a cattle wagon to Ulm in Germany. I was sent to the Black Forest with 23 others working on a farm. This farmer had lost his arm in the war. I was the tallest one so he picked me. He’d seen hardship and he was a very nice person. In 1949, when they blockaded Berlin, I thought if the Russians came I’d be ‘against the wall’ [shot]. I was asked ‘Where would you like to go?’ ‘Wherever I can go’ ‘Australia is the best place for you’.

I only spent two weeks in the camp. As soon as they advertised work I came to the sawmill in Orange [Wangarrie].

I went by ship from Naples to Sydney. I didn’t know nothing about Australia. We got to the camp on 8 October and it was freezing cold. But you could eat as much as you liked. We took left over bread and butter and syrup in the huts [in case of hunger]. About three days later the 44 gallon waste bins were full because they fed us so much. And we got paid five bob a week unemployment money. I only spent two weeks in the camp. As soon as they advertised work I came to the sawmill in Orange [Wangarrie]. Later I worked in the Woollen Mills, then Emmco, then the railways.

Police Sergeant Emmerton would tell us to keep quiet, then we used to invite him up the back and give him a vodka. ‘You carry on but quieten down,’ he would say.

The Ukrainian Hall was built between 1954 and 1956 because we wanted a Ukrainian social group. We called it the Centenary Hall. At the socials were a mixture of Ukrainians and Australians. We had such a wild party that at midnight the police would come and tell us to quieten down. Music was either on records or if there were enough musicians, a live band. Vasil Luhovski played the violin, an Australian played piano and Max Fricke the bandoneon. Everyone had to bring their own supper and drinks. There was vodka and beer flowing everywhere. George Piper was president of the club. Police Sergeant Emmerton would tell us to keep quiet, then we used to invite him up the back and give him a vodka. ‘You carry on but quieten down,’ he would say. People came from as far as Parkes and Bathurst for the dances.

Helen: We were young, we were poor but we had energy and we had a good time. Sam and I lived near one another in north Orange. Sam was invited to my parents’ house by a mutual friend and we ended up marrying at St Joseph’s Catholic Church in Orange in 1954.

Sam: [Before] I was living at a boarding house in Peisley Street but I couldn’t get any sleep. I was working the night shift at the Woollen Mills and came home about 4am. At 6am a bell would ring for breakfast, then at midday another bell. I saved about £30 as I wanted to buy a pushbike. This friend showed me blocks of land for £100. I said I only had £30. He said I could put a deposit down of £20 then pay the rest off. I could put a temporary dwelling up then build a house later. When I told the other men at the boarding house they all marched down to buy land. Temporary dwellings were going up everywhere. I lived in a temporary dwelling for four years.

The Gladstone was a ‘new Australian’ pub. You heard all different languages there. We got on really well with everyone. There was a corner in the pub they called the ‘Orthodox Church’ because it was favoured by migrants.

‘This is not a country… this is heaven!’

When my relations came out from Ukraine many years later, someone asked one of them, ‘What do you think of this country?’ She replied, ‘This is not a country… this is heaven!’

In 1989 we went to the Ukraine and my sister-in-law showed me some embroidered cotton dresses she made some time ago and asked me if I’d like them.

Helen: In 1989 we went to the Ukraine and my sister-in-law showed me some embroidered cotton dresses she made some time ago and asked me if I’d like them. They always did fancy work in the winter time because in the summer they had to work in the fields. The Ukraine wasn’t very much different to what my village was like in Croatia. The customs were different and the food different but the people were very kind. They gave you so much it was embarrassing for me.

We bought a shop in Enmore for two and a half years and then we came home to Orange. Then when our daughter Mariane was a month old we opened a shop in Olver Street. It was a mixed business. It was hard work but we had a good time and we met lovely people.

two Ukrainian dresses of cotton & homespun material with hand embroidered flower patterns
Helen: “In 1989 we went to the Ukraine and my husband’s [Sam] sister gave them to me. She had made them a long time ago.”