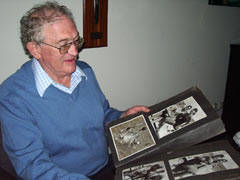 Despatch clerk at a cardboard factory in Botany, Sydney

My journey of migration to Australia could be said to have started well before World War II, when in 1933, disturbed by European political events and the wave of anti-semitism in Europe at the time, my father thought it best for our family to leave Hungary and head for a European city as far as possible from central Europe. We decided upon Lisbon in Portugal. In 1938 my family moved back to Budapest, Hungary for a short while but were increasingly dismayed by the scrutinisation of Jewish citizens that was happening there. After the Nazi occupation of Czechoslovakia and Austria in 1938, we made arrangements for my parents, my sister Renee and I to return to Lisbon which we did in 1939. We lived there for the next three and a half years after which we decided to try to migrate to Palestine.

I remember we left Budapest in 1939 with 32 suitcases holding all the belongings we could manage to carry with us.

I remember we left Budapest in 1939 with 32 suitcases holding all the belongings we could manage to carry with us. This was not a fun way to travel, someone would always have to be looking after the cases. By the time we left South Africa for Australia in 1950 we had reduced the number to 26 cases – which in my opinion was still too many. I now travel light.

That trip was a memorable one for us as I almost died. I was struck with typhoid fever…

We spent the years of World War 2 and a couple of years after the war travelling through Africa, South Africa and Palestine where we lived for a time. After the war we went back to Hungary where we stayed a year from 1947 to 1948 but Communism had changed the way of life there. By late 1948 my father, my mother and I decided to join my sister in South Africa. Renee had married while we were in Palestine, she and her husband lived in Johannesburg, South Africa. That trip was a memorable one for us as I almost died. I was struck with typhoid fever on the last leg of our trip to South Africa. After weeks of misdiagnosis I was finally treated appropriately at a hospital in Mombassa and made a full recovery before continuing to Johannesburg.

…and after witnessing the evils of racism during the WW2 just could not accept such attitudes and practices.

I found work in Johannesburg relatively quickly despatching small goods. At first my parents and I expected to settle in Johannesburg. But the government condoned terrible attitudes to the black South Africans and after witnessing the evils of racism during the WW2 just could not accept such attitudes and practices. We looked to Australia as a safe and humane place to live and were doubly happy when we found that Renee and her husband were planning to move to Australia too.

In April 1950 we left Cape Town on the English ship, the Wairangi. After a rough crossing we reached Fremantle on 19 May 1950 where I spent my 22nd birthday – in fact I spent the day on the ship, moored at sea off the port for there was a waterside workers strike on the wharves at the time and we could not dock and go ashore. Fortunately there was lots of lively company on board so I could celebrate my birthday properly. After Fremantle we sailed to Adelaide and then Melbourne where another waterside workers strike meant our ship would be delayed for weeks. So we accepted an offer of a train passage to Sydney where we arrived in June 1950.

Our wandering days were finally over but my experiences of those years have been recorded in my photo albums. I have photos from every leg of our journey since 1939. 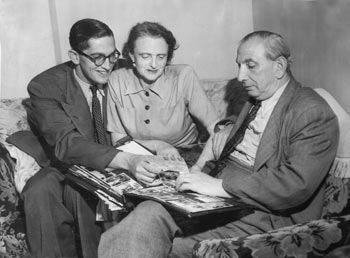 My parents and I found accommodation with a rather eccentric lady…

My parents and I found accommodation with a rather eccentric lady in Victoria Road, Bellevue Hill. She spent hours seemingly playing the piano – but it turned out to be a player piano, a pianola which she skillfully imitated playing! A few weeks later we found a holiday flat to lease at Bondi which was where I joined the Bondi North Surf Club and re-established my lifelong involvement with playing water polo. I had started playing water polo when living in Johannesburg and over the two years playing in competitions there I had quite polished skills at that sport. In 1952 I was interviewed by Pix magazine, a popular magazine in the 1950s and 1960s. The magazine photographer took all those pictures of me training and at the beach. I featured in the magazine as “Fred Mayer, First New Australian Lifesaver”. 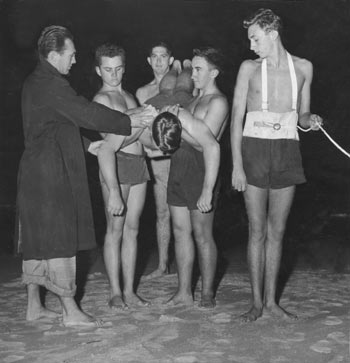 Here was the old bane of racism once again.

Finding work was a priority for the family at that time and because I had had some experience I decided to look for retail work. I went to Anthony Horderns, who claimed to only employ Protestants. I went to Mark Foys who claimed to employ only Catholics and then to Farmers who only wanted people of English descent. Here was the old bane of racism once again. Anyway I finally spotted an ad for positions at David Jones where I ended up working in the food hall.

I stayed there earning good money for about five years. Then in 1956 I made a tour of Europe where apart from enjoying life as a tourist I established many future business contacts. When I returned to Australia I began the process of setting up my own importing business, F. Mayer Imports. My first consignment of imports was ski wear and it was not until the rigorous import restrictions of that time were lifted that I began importing continental food stuffs in earnest.

When we first arrived in 1950, Australian food was a real oddity.

That was another thing about Australia in those days. When we first arrived in 1950, Australian food was a real oddity. You would go to a restaurant, it would look great, clean and tables with white tablecloths etc but all that was on the menu would be meat pies and sausage rolls. But this all began to change during the 1950s and there was a strong fledgling market for continental foods by 1956/7 when I started my business. Today Sydney’s restaurants have some of the finest food in the world.

I started my business in my garage at home in Bondi where I housed the imports. Then when I started importing cheeses and more perishable goods I rented cool rooms at Ultimo. Gradually I built the business up and bought land in Rosebery for premises and then later in Alexandria and then finally I bought this property here in Mascot. Now I have nine buildings in this street, all warehouses and offices. These days I still work five or six hours five days a week and my sons and step son all help run the business.