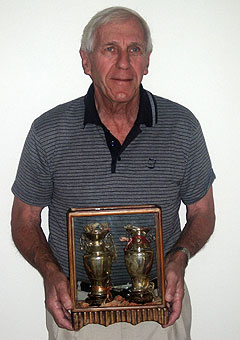 My parents worked for a retail business

My parents owned a women’s sportswear shop in Sydney CBD

These two silver vases were given to me as a gift by Umbo, a Chinese employee of my father in Shanghai [ China ]. He told us that they signify the friendship between the Jewish community and the Chinese. They are always prominently displayed on the Chinese furniture that my parents brought with us to Australia and are a constant reminder of the strange and awesome journey that brought me here. When I consider the impact of being kicked out of Germany, finding refuge in Shanghai, and then a place in Australia for growing up and developing, I want to share the story; I have to tell people that this is what happened.

My grandfather was a war veteran for Germany and he therefore believed that no harm would come to his family.

I was born in Berlin in 1935 and by then there were restrictions on rights and citizenship for Jews in Germany. My grandfather was a war veteran for Germany and he therefore believed that no harm would come to his family. The family made no move to leave Germany – until 9/10 November 1938, Kristallnacht.1

Soon after, my family received an eviction notice from the Nazi Government whereby Jews could no longer live alongside Aryans. The deadline date to get out was 31 December 1938.

My father tried to get entries for Australia and the United States, but was refused. Word was going around that Shanghai was an “open port” and you didn’t need a visa. All you had to do was to get there and you were accepted.

We went by train from Berlin to Genoa [Italy] and, ironically, boarded a German passenger liner on the 26 April 1939 and after a few stops arrived in Shanghai three weeks later.

We lived in a part of Shanghai called Hongkew, the cheaper dilapidated area…

For generations, thousands of Jews had formed a strong community there 2. We came with very little in goods or financial assets. We lived in a part of Shanghai called Hongkew, the cheaper dilapidated area just north of the centre and the main area for refugees. We depended on welfare and my mother would go and pick up our main meal of the day from a Heim3. My family was lucky to get our own room with a stove, a sink and bed. This was in a kind of terrace house with four levels and three rooms on each level with a shared toilet and bath. It was very basic with no sewerage system and the effluent was collected daily.

My father only got work for short periods and because daily inflation was high he had to go out hawking things like coal, coffee and wurst [sausage]. He eventually managed to start his own carrier business.

My contact was solely with refugee kids and we never mixed with Chinese. English was the universal language for the foreign nationalities. Our education was based on the Cambridge system and was quite vigorous.

Life became more difficult when the Hongkew ghetto was created. 4 All Jews not already living in this area were forced to move in. Movement in and out of the area was controlled. Japanese language became compulsory at school.

Shanghai was thought of as a place of transit. But after the war the economy improved and my father’s carrier business was doing well; baggage and related customs handling was the right sort of business for those circumstances. For a while we didn’t push the idea of leaving but dark clouds were hovering. The Communist movement was stirring enough to cause a lot of concern about the future. And that forced the issue of finding somewhere to go again.

My Barmitzvah was held in July 1948, six months before our migration [to Australia]. Umbo was the only Chinese person invited and I still remember him explaining the significance of his gift to me. You can see him in this photograph taken with other immediate family members at my Barmitzvah. 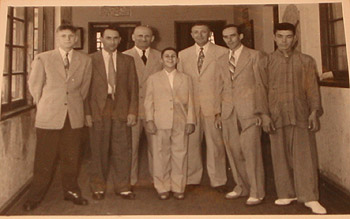 There were many restrictions placed on Jewish refugees migrating to Australia.

There were many restrictions placed on Jewish refugees migrating to Australia. Appointed public servants carefully examined the refugees in relation to their eligibility and fitness. There were restrictions on the number of Jews per shipload which could not exceed 25% of any passenger load irrespective of numbers sailing. The application form for migration, Form No. 40, asked: “cross out whichever does not apply: Jewish, non Jewish”. It made no reference to any other religion. My father found a former business colleague from Berlin who had migrated to Australia in 1938 and he was prepared to sponsor us to get an entry permit.

We left Shanghai on the 15 February 1949 and en route stopped in Cairns in Queensland, where I had my very first milkshake.

We left Shanghai on the 15 February 1949 and en route stopped in Cairns in Queensland, where I had my very first milkshake. Soon after we sailed through the Heads into beautiful Sydney Harbour to the Overseas Terminal at Circular Quay, on a sunny day with clear blue skies. My mother fell instantly in love with Sydney.

Friends arranged accommodation for us; a rental room in a residential hotel and later we moved into a flat in Kings Cross. Many of the refugees were in the garment trade either making or retailing. Initially my parents worked as employees in a retail business, and within a year they opened their own women’s sportswear shop in the Piccadilly Arcade, Pitt Street in the city.

In June 1949 I started school at Randwick Boys’ High. There were already quite a few migrant boys there and numbers continued to grow. That created such a competitive environment that the standard became very high. I had classmates who couldn’t speak a word of English when they arrived. One in particular was top in English at the end of his first year. I was a good student and did quite well, but the social side was difficult for me and as an only child I was often alone.

In spite of the numbers of refugees, I generally experienced an anti-refugee sentiment in society. My personal refuge was sport and I achieved a high standard in soccer and table tennis. I worked my way up from a 14 year old with Hakoah Soccer Club 5 and by the time I was 20 we were in the top league.

Nowadays when I meet up with my friends from Shanghai, we find we’re like a clan.

Nowadays when I meet up with my friends from Shanghai, we find we’re like a clan. Ex-Shanghai survivors are a very unique community. Looking back, Shanghai was a terrible place to live: filthy with a dreadful climate; there was large unemployment; we didn’t have trees, parks or beaches. But we survived – only because of Shanghai. We were able to migrate there and so we were saved! Then coming to this beautiful sun-drenched country, particularly Sydney, we had to start all over again.

I now volunteer as a guide at the Sydney Jewish Museum. I do this because of the devastation of the Holocaust on my family. I submitted testimonies to Yad Vashem 6 for 50 of my family who perished. My wife and I are keenly involved with genealogy. I’ve discovered family who also survived the Holocaust and I help people find former Jewish residents of China. I feel I’m contributing an important aspect of the Holocaust for so few people are aware that Shanghai was a place of refuge.

My greatest joy is my family with three children and five grandsons. This secures the Jewish descent and heritage that Hitler tried to destroy. I love the Australian way of life and always feel there is no better place to live. With no first cousins, I’ve made a point of meeting my second and third cousins all over the world. These “reunions” have been very special for me. I still feel very emotional when I take groups around the Jewish Museum and tell them my story.

Footnotes
1. Kristallnacht (the night of broken glass) was a tragic night in Jewish history. Throughout Germany Jewish synagogues and properties were destroyed and many Jews attacked and imprisoned.

2. A few Sephardic Jews came in the 1850s from India but by 1920 thousands of Russian Jews came fleeing persecution. By 1941, 20,000 Jewish refugees from Central European countries made their way to Shanghai with about 8,000 from Germany.

3. A Heim was a dormitory-style camp which could accommodate about 100 people in quarters with double bunks and no privacy.

4. Japan was nominally in control of China but the British largely had international control of Shanghai. After the Japanese attack on the American fleet at Pearl Harbour in 1941, the Japanese marched into Shanghai and their German allies insisted that they also take action against the Jews.

5. A Jewish club in Sydney (similar to an RSL) that sponsors various sports.

6.Yad Vashem is a Holocaust memorial centre in Jerusalem, Israel.

nazi eviction notice, 25 november 1938
“The Nazi party issued this notice evicting us from our home after Kristallnacht. It was our cue to leave the country and soon after we left for Shanghai, China.”

two Chinese silver vases
“This gift for my Barmitzvah was given by Umbo, a Chinese employee of my father. It is symbolic of the friendship between the Chinese and the Jewish communities.”