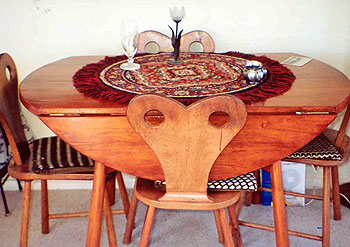 Stayed with husband’s friend in Orange and eventually moved to Frederica Street.

My husband Ted was a carpenter and his friend found him work building houses in Orange. I was a house cleaner.

Ted worked for a number of local builders: Rutten, Tenten, Kloosterman and Runeman.

They [said] Holland was getting too full. People needed houses and wages were very low. You think there is no opportunity in Holland. We married just before we left. [My husband Ted] went back to carpentry but he was a bit more arty. The wages were terrible. You had to be on a list before you get a house.

When I came off the train I thought I was in a cowboy town because of the shop awnings.

We sailed in October to Sydney and arrived on November 16, 1954. We went straight to Orange because my husband’s friend was here – De Rooy. When I came off the train I thought I was in a cowboy town because of the shop awnings. It was a cold snap. The De Rooys looked for accommodation for us. We had a room with a very nice lady in Prince Street. She liked Dutch people.

Then we moved into the old golf house in Icely Road. My husband was a carpenter so he made straight away beds and little cupboards next to them and two big cupboards. I cooked on a kerosene cooker which was from Holland originally.

One day he came home and said there was no more work. We made some sandwiches to go on the night train to Sydney…

Ted worked for Rutten and Tenten building houses. One day he came home and said there was no more work. We made some sandwiches to go on the night train to Sydney, but then Kloosterman [local builder] offered him work so we stayed. Ted worked with Kloosterman and Runeman at first, then just Kloosterman.

Then we had a fire in the old golf house. I had the second baby by then. We bought land in Frederica Street and we lived in the garage behind [the other] De Rooy’s house [while our house was being built]. There were three rooms, including Ted’s work room. The toilet was outside.

We built this house in about 1958. Ted was building the house with the help of another man in his spare time. There was no carpet and no curtains at first.

The children went to school at St Mary’s, then the boys went to De La Salle and the girls to Canobolas High. We bought bicycles – I was cleaning houses. We went on bikes with the boys on the back of the bike and one on a scooter. We went to the swimming pool. In 1962 we bought a car, the year our fourth child was born.

We had Italians next door to us and I had my Dutch friend. I started reading comics and magazines for easy reading. That lady where we lived first, we still had contact, and that helped with English. I went to English lessons too.

Ted made musical instruments – violins, violas, guitars, balalaika, ukelele, banjo. He played at the music school in Hill Street or in shows in Bloomfield Hall etc including with a trio of Europeans called ‘The Happy Wanderers’. He played guitar and violin. He sold some instruments at special events. He had no formal training but he had the basic idea and the rest he did himself.

I’m contented but I think when you get older you miss your family.

ukelele
“The ukelele was made by my husband Ted while he was in Sumatra in 1948 on military service just before the Dutch left Indonesia. It was probably the first musical instrument he ever made.”

timber dining table and chairs
“My husband Ted made this small, round dining table with four matching chairs with heart-shaped backs in a European style with leaves on the table so it could be extended. He had to make it quickly because we were loaned a table and the people were moving to Melbourne and wanted it back.”