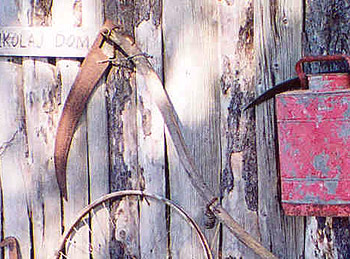 Cottage at Huntley, south of Orange

My mother Janina was Ukrainian, born in Ostrov, near Lvov, Poland (now in Belorussia). My father Mikolaj was born in Belorussia. In 1939 he was in the army but from September 1939 he was a prisoner of war. From 1939-45 he was a farm worker in Bulleneuth, Germany, and from 1946-47 he worked in a porcelain factory in Mitterteich, Germany. In 1948 he was a labourer at a military post in Garmisch and in 1949 he was in camps at Luttensee and Mittenwald.

My father was a cook on the ship to Australia. I remember the Suez Canal. I do remember my first Christmas at the Parkes camp.

There was no electricity, no water, no sewerage. We had cows for milk and butter…

We came to Huntley [Orange region] in about July 1951. My father worked for 31 years on the railways. They lived in tents in Orange along the track. He saw this shack in Huntley and he got a perpetual lease and stayed there for many years. The house had a main bedroom and a sitting room, a bit of a verandah and a kitchen. There was no electricity, no water, no sewerage. We had cows for milk and butter, we grew our vegetables and bread was delivered from Bobeldyk’s at Spring Hill. Mum used to pick peas at Worboys’ place in Spring Hill for extra money for her kids. She used to pick apples as well.

There were many migrants in Spring Hill – Vankovich, Zagorski, Dluzniak, Kochanowski.

We fitted into the Spring Hill community very well.

As kids, we went to Sunday school, we were free, we adapted easily but we never invited people to our house because we didn’t have much. We fitted into the Spring Hill community very well. We joined the Methodist Church there. We picked up English very quickly. But I knew my parents couldn’t help me. I studied under a kerosene lamp. I went to Orange High. I spoke a mixture of Ukrainian, Polish and Russian. My father could speak Polish, German, Ukrainian, Russian and Belorussian. Dad picked up English on the railways and through films.

From about a six-year-old I wanted to become a teacher. I got a teacher’s scholarship. My childhood was basically happy.

scythe
“The blade of the scythe was brought to Australia by my father Mikolaj from Germany where he had been a prisoner of war and later a Displaced Person. He used it extensively on our small acreage at Huntley.”