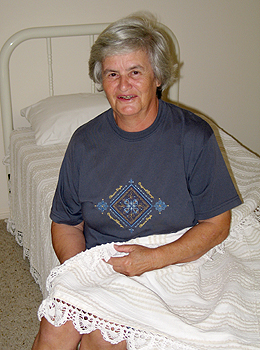 A family friend’s home in Darwin, then Brisbane for a few days before reaching my father’s banana farm at Mullumbimby, Far North Coast, NSW.

Domestic duties in my father’s house and Uncle Paul’s.

My name is Varvara Varela, known in Australia by the name Barbara. I was born on the Greek island of Ithaca, living in a very small village. I have a sister who is three years younger. We lived happily in the village – no electricity or running water or cars – but the kids, we were happy because we didn’t know any different from that. We were living in the same house with my parents, grandfather, grandmother and Mum’s sister. Then the [Second World] war started and there were some horrible years. We were starving. We didn’t have enough to eat.

[Dad] was going to find us a country he liked. He would find work, save enough money and bring Mum and us girls with him…

Mum said I was three when Dad was back on the island for a short holiday (he was a seaman, away for long periods of time) and said to Mum that he was going to find us a country he liked. He would find work, save enough money and bring Mum and us girls with him. He had a brother in Australia who was growing bananas at Mullumbimby [in the Byron Shire]. He wrote to his brother, came to Australia and the two brothers together grew bananas.

At home during the war Mum knew some men who go to the mainland who bring back wheat or corn. We couldn’t grow anything on the island; we didn’t have enough ground. So Mumma approached one of the men and he brought us some flour. Mum made us some bread and we were happy because we had something to eat.

She was in love with our father. She was living for the day when she was going to meet her husband again…

Well, the story goes this man wanted more than that. He actually wanted our mother to be his friend and Mum, she didn’t want to. She was in love with our father. She was living for the day when she was going to meet her husband again. But this man said, “If you are not coming with me, I will kill the kids”. So she did and there was a girl born of this, a girl I have tried to find over the years with the Red Cross and I haven’t had any luck.

After the war, Dad wrote a letter to Mum and said, “I want you and the girls to come to Australia, as we said a few years ago.” Mum told Dad what had happened to her and Dad decided to get a divorce. He didn’t want to bring us to Australia and didn’t want anything to do with the family. So we stayed with Mum and that man, and we had a terrible life. Lucky for us, Mum wrote a letter to Dad and she said, “It doesn’t matter what happens to me, but please take the girls with you.” So he started to make the papers for us to come to Australia. He went to Qantas in Brisbane.

We didn’t know where we were going, we couldn’t communicate [in English]. Every night we slept on the ground – no night flying…

It was 16 months before we came to Australia when I was about 15. Qantas was starting to go to Europe. They said to Dad, “Yes, we will bring your daughters to Australia, but why don’t you bring your family by boat?” Dad said, “Well I am a sailor. I know exactly what goes on on those boats!” So Qantas was very nice and we were the first young kids to come from Europe to Australia at that age. The plane took four days journey from Athens to Darwin and the plane had 48 [passengers]. We didn’t know where we were going, we couldn’t communicate [in English]. Every night we slept on the ground – no night flying – and through the day we were flying. Every night it was Australia, so we thought, but the next day it was back on the plane and another day in the air.

When we came to Darwin we saw a lady there, and she approached us and asked if we were Nick Melidonis’ daughters. She spoke to us in Greek and it was really, really lovely to hear our language, to really communicate. We said, “Where are we?” and she said, “You are in Australia”. And we said, “Where is our father?” and she said, “Your father is in Brisbane”. “Where is Brisbane?” and she said, “It’s far away from here, but you are going to stay with us for a few days ’til you get another plane to Brisbane”, which we did. That was a lovely family and we got very fond of them. When we came to Brisbane, it was Dad with two of his friends and we thought, “My God, which one is Dad”? We stayed in Brisbane for a few days and came to their banana farm, and we told Dad what had happened back in Ithaca. Dad said, “Why did your mother not write me the true story” and I said, “Mum felt nobody would believe her”. Dad said, “In that case we are going to bring your mother to Australia and we are going to be a family together”. But what happened, when this man found out Mum was coming to Australia, he killed our mother.

My sister went to school but I stayed at home to look after Dad and Uncle Paul. Our neighbours had a farm and they were very kind to us…

When we came to Australia from Greece, after the war, we couldn’t communicate as we didn’t speak English. My sister went to school but I stayed at home to look after Dad and Uncle Paul. Our neighbours had a farm and they were very kind to us, trying to help us as much as they can. [Because of that] I remember saying to myself that this is where I stay. So I stay on the banana farm for six years as housekeeper. After that I married George Varela who was a widower with three kids and we had a daughter, Penny. Well, the marriage deteriorated and I left the home and moved to Kingscliff, [Tweed Shire]. I choose to live the rest of my life alone.

I was naturalised on 23 March 1966 in Murwillumbah and I like Australian people because they were so good to us. I am lucky that I am in Australia. I am lucky my daughter is born in Australia and my grandsons [too]. I think it doesn’t matter what happens to anyone in their life, if you are willing to work you can bounce back in this country. But if I was on the Greek islands I couldn’t bounce back. When I found myself by myself, I went and got a job and it helped me. First I worked in ‘home help’ in Murwillumbah for about six months. Then I worked for four years in the Murwillumbah Motor Inn as cook/ cleaner and for 18 years as a cook at Green Hills Retirement Lodge. I bought a unit and then I built a house; I bought a car; I went for trips and I have my family. I plan to go back to Greece next year with my daughter, son-in-law and grandson, but I come back to Australia. This is home.

I started to have tears in my eyes. My daughter thought it was because I was overjoyed to see the place where I was born…

I went back to Greece 40 years after I had been in Australia. I had my daughter with me and my son-in-law. When we were approaching Ithaca, I started to have tears in my eyes. My daughter thought it was because I was overjoyed to see the place where I was born, but it wasn’t that. I was saying to myself, “Oh my God, what have I done, why are you coming back?” But my reason for coming back was to find my mother’s grave, which we did, the three of us. I was pleased, I fixed Mum’s grave. I am really pleased I did that.

I have – you could call it a bedspread – something I made with my mother. I brought it to Australia and it is the only thing I have that belonged to my mother and I still treasure it after all those years. It has two different colours; the white one is the cotton and the cream is the wool. We bought the wool from a shepherd and I spun the wool and crocheted the border. Mum wove it on a loom so you could only make it so wide. It was made in three pieces. She made her own pattern because she was really good at that. My mother said to me, “You look after this, this is from me to you”. It is beautiful and I was about 15 when I brought it to Australia, all those years ago, all those years ago.

hand woven bedspread
“I brought it to Australia and it is the only thing I have that belonged to my mother. I made it with my mother when I was about 15 for my glory box. Mum made her own pattern because she was really good at that. I treasure it after all those years.”