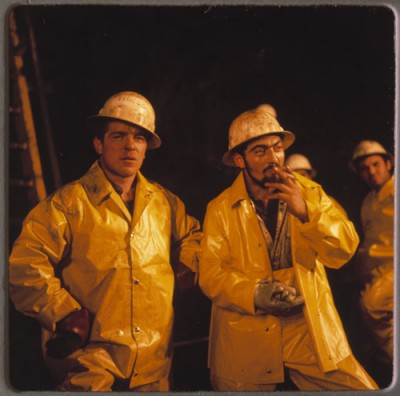 Karl Rieck was recruited in Germany by the Snowy Mountains Authority. Despite his Carpenter’s Guild membership, he had to pass a Snowy Mountains Authority carpentry test by making wooden louvers. When Karl arrived in Sydney he had to sit another test by the Building Workers Industrial Union. Like most other carpenters, Karl joined the union which represented all carpenters and bricklayers on the Snowy Scheme.

In 1951 Hein Bergerhausen, a former Luftwaffe pilot, was offered a 2 year contract with the Snowy Mountains Authority. In July he set sail on the MS Skaubryn, a ship chartered by the Authority to transport German tradesmen to Australia. Hein left his wife Sybille and daughter Brigette in Cologne, Germany while he got established in Cooma and they immigrated to Australia the following year.

Hein’s first night in the Mountains in September 1951 was an abrupt introduction to his new life in below freezing conditions. It was even colder than sitting in the cockpit of his Stuka before a winter dawn take-off on the eastern front. The walls of the huts were thin and heaters were considered a fire risk, so were forbidden. The Snowy Mountains Authority had even forgotten to supply blankets so he crawled fully clothed under the mattress and shivered on the wire bed base wondering what he had got himself into. In the morning the day was brilliant sunshine with the most beautiful, cloudless blue sky they had ever seen . 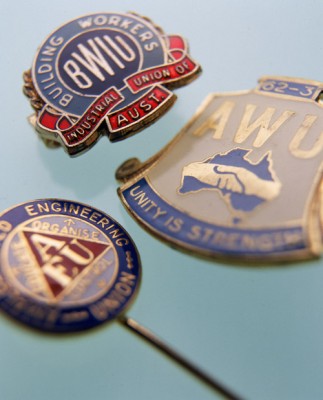 The Building Workers Industrial Union was concerned about the validity of the qualifications of migrant workers and was critical of the government’s policy of recruiting ‘foreign’ labour. Despite this the union doggedly represented the migrant workers rights and conditions. The 1951 issue of the Union’s ‘Building Worker’ was printed in both German and English reflecting the high numbers of Germans working in the trades.

After Hein’s experience with the cold nights, it was a shock for him to discover that there men were working and living in the mountains in tents. As the population of workers in the camps grew Hein was surrounded by every nationality on Earth.

“For the first few days I was worried (about hostility towards Germans) … but you could see almost straight away there was nothing to worry about. Everyone just seemed to be glad to be here…It was a happy time…. The war was behind us… we were all starting again.”
- Hein Bergerhausen
“I’d four years in the (Australian) army- I could have hated those German chaps as much as anyone, but I couldn’t see the sense in it. We were there to do a job. The war was over and they were there to kick off again and start a new life.”
- Tom Little, Snowy Mountains Authority foreman

In Snowy Hydro society, social hierarchy was based not on ethnicity but on profession. Professional staff looked down on waged labourers, a reflection of the wider Australian community despite the myth of Australia as the classless society. Away from the Scheme however migrants faced hostility.

The Italians had the hardest time adjusting to the new life. They complained they wanted real spaghetti. The Australian cooks didn’t know what they were talking about. The Italian firm contracted to build houses for Authority set up its own mess and had spaghetti sent from Melbourne.

“We got on well with the Italians. Their mess was opposite our barracks. They were a rowdy bunch. My God, in the night time you thought they were killing each other. They were celebrating … every bloody night. The noise was unbelievable.”
- Hien Bergerhausen

In 1952 Mario Pighin applied for a job with the Sydney Mountains Authority and received a phone call shortly after from the Authority’s representatives in Italy advising that he was successful and would be sailing for Australia in five days time.

Mario and his fiancée, Angelina, got married immediately: Next morning Mario farewelled friends and neighbours and Angelina went out to begin her new life working on her husband’s family’s farm. The following day Mario caught a train to Naples and boarded a ship to Australia to work as a painter in the Snowy township of Cabramurra. They didn’t know when they would see each other again but his contract was for at least two years.

For Guiditta Miane and Alfredo Fabbro, the call came just a fortnight later. They were married on 29 June 1952, three days before Alfredo sailed, also for Cabramurra to work as a carpenter. The couple’s plan was for Alfredo work for high wages and return with the savings in five years.

In 1951 the Norwegians came. Selmer won the Guthega Dam contract and brought out hundreds of workers for northern Norway near the Arctic Circle. The Norwegian workers were well catered for and many other workers including Australians would travel to their camp for good but albeit different food. For recreation the Norwegians enjoyed skiing. In 1953 they built a ski-jump at Guthega – the largest in Australia. Competitions were held each year and experts such as Kore Grunnsund and Gunnar Wennberg set new Australian records. The Norwegians also introduced cross country skiing or Langlauf to Australia. 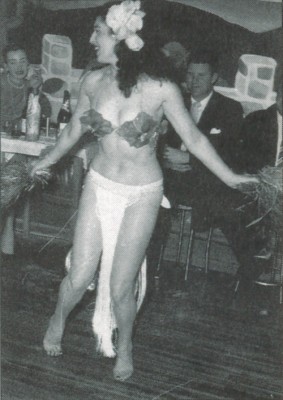 Many Norwegians were married and the extended separation from families saw many by out their contracts and return home.

However the majority of the men were single, highly paid and bored. Drinking was a favourite past time and it wasn’t long before pimps and prostitutes of Kings Cross saw a lucrative market. Some women made up to three hundred pounds over a weekend. The average weekly wage in 1951 was ten pounds per week.