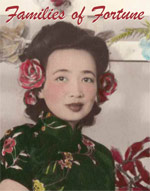 A wave of Chinese migration to the Tweed began in the late 19th century and the newcomers quickly established themselves as market gardeners, banana growers, cooks, herbalists and shopkeepers. Many long-term Murwillumbah residents remember the Tong family who ran a store for many years. All these are recorded through personal stories, photos and historical information in the book Families of Fortune – Chinese People In The Tweed.

It was written by Joanna Boileau for the Tweed River Regional Museum and NSW Migration Heritage Centre in association with the Chinese-Australian Historical Society and the Tracking The Dragon project. The book was Highly Commended in the 2010 National Trust Heritage Awards.

Or order a copy through the Tweed River Regional Museum, Tweed Shire Council.

During the nineteenth century there was an exodus from China to South-East Asia and across the Pacific. The majority of these migrants came from the provinces of Guangdong and Fujian in southern China, first through the port of Amoy (Xiamen) and then through Hong Kong and Macao. A number of factors drove Chinese people (the majority of them men) to leave their homeland: drought, famine, overpopulation and political turmoil all affected the region. Unable to make a living, many of the migrants hoped to earn enough overseas to support the families they left behind and to eventually return with sufficient savings to build new homes.

Australia was the recipient of part of this diaspora from the earliest days of European occupation. Links with China were established when several ships of the First Fleet, after delivering their human cargoes of convicts, sailed for Canton (present day Guangzhou) to pick up goods for the return voyage to England. It is likely that the ships carrying tea, porcelain, silks and other commodities had Chinese crew members and that some of the crew disembarked in Sydney. We know that by 1818, Mak Sai Ying (John Shying) had arrived in Sydney. In 1829, after farming for some years, he became the publican of The Lion Hotel in Parramatta. Prominent landowner John Macarthur employed three Chinese workers on his properties in the 1820s. Chinese migrants came to Australia in small numbers in the early nineteenth century to work as cooks, labourers, market gardeners and cabinet makers. In the 1840s, after convict transportation ceased, Chinese indentured labourers were imported to work on pastoral stations, partly to fill the shortfall in workers. From the 1850s, lured by the opportunities of the Australian goldfields, thousands of Chinese people came to Australia. In 1861 they made up three percent of the colonial population. This dropped to one percent by 1891, by which time gold had petered out and many Chinese miners had returned home.

Most Chinese migrants arrived through the ports of Sydney and Melbourne, and fanned out across rural New South Wales and Victoria. They encountered an unfamiliar and often hostile society, and were limited in their occupations by their own skills, language barriers and the racist attitudes of white colonists. Despite the numerous restrictions placed on them, Chinese people played an important role in the economies and communities of regional New South Wales. Families of Fortune traces the history of Chinese people in the Tweed Valley in north-eastern New South Wales. It focuses mainly on the period between 1850 and 1950, when the Chinese presence was the most significant. During the nineteenth century Chinese, South Sea Islanders and Indians were the main non-European groups to arrive in the Tweed. In 1901 the new Federal Parliament introduced the Immigration Restriction Act 1901 which initiated the White Australia Policy, aimed at excluding non-Europeans from Australia. This legislation shaped Australia’s immigration policy until World War II and resulted in a decline in the Chinese population. The post-war migration program introduced by the Federal Government in 1945 brought a large influx of British and European migrants to boost Australia’s population and provide a workforce for industrial development. It was not until the 1960s that the White Australia Policy was finally dismantled and Asians once again began to be accepted as migrants.