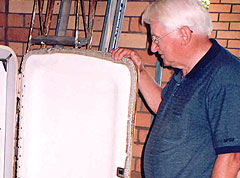 Shared a house in March Street, Orange with two other German families for 18 months.

Draughtsman at Emmco white goods factory in Orange. I ended up spending all my working life there and was recruited by one of their branches in Germany. [Wilhelm]

Wilhelm: I was born in Zerbst near Dessau, Germany. I was apprenticed to the Junkers aircraft factory in Dessau at age 14 as a toolmaker. After finishing my apprenticeship I continued working for Junkers until January 1945 when I was conscripted into the army. Hilde and I married and we left East Germany and settled in northern West Germany for a few years.

Hilde: I really was scared [in the Russian Zone].

Wilhelm: If you were caught [trying to escape] you had it.

Hilde: Coming over [from East Germany ] was the most frightening thing. We were on bicycles. It was pitch dark and there was a Russian camp fire on one side and one on the other and a paddock in the middle. There was a little path going through a swamp. The two blokes [assisting them to escape] took our bicycles and we followed them. Suddenly one said, ‘We have to go over there [a creek] – no man’s land.

Wilhelm: You [Hilde] went piggy-back. We never spoke about what we owed them. He said ‘I can see you haven’t got much money’ so we paid just 300 or 400 marks.

Hilde: It was so dark. The atmosphere – you can’t describe that.

Wilhelm: There were that many going over and they started sending some people back. We were told we had to go back. I had worked in West Germany for a year before. The Town Clerk gave me a piece of paper – it saved us. You had to go to a refugee camp [once you had escaped to West Germany ] or you couldn’t get a ration card. Then you were allocated somewhere to live. We were put on a farm on the Dutch border and the farmer had to vacate a room. The locals spoke platdeutsch [literally 'flat German']. We were just as much a foreigner as anywhere else. You stood out like a sore thumb.

Hilde: I was still frightened that the Russians would overrun Germany .
I did a bit of smuggling over the Dutch border, hiding cigarettes in the lining of my bag…

I did a bit of smuggling over the Dutch border, hiding cigarettes in the lining of my bag, selling them at a Dutch market then buying luxuries which were heavily taxed in Germany, such as tea and coffee, and sometimes buying delicacies such as smoked eels.”

Wilhelm: Suddenly, in one of Germany’s major newspapers appeared a large advertisement reading: Toolmakers wanted for large company in Australia. We didn’t know much about the country but then we were young, had no children and a few years away in another continent was very appealing.

On the morning of 10 June [1953] we were taken by train to Bremerhaven. The ship was the Castel Verde. It was an Italian ship from the Sitmar Line. The majority of passengers had to be satisfied with dormitory type accommodation. There were between 800 and 900 German migrants and once we were in the Mediterranean the ship picked up another 200 to 250 Greek migrants.

… accommodation at Bonegilla was very basic but finally Hilde and I were together again, which made up for all the shortcomings.

After disembarking in Melbourne we were taken to a railway station to board a special train to a place called Bonegilla, about 500 kilometres from Melbourne. The accommodation at Bonegilla was very basic but finally Hilde and I were together again, which made up for all the shortcomings.

I stayed about a week in Bonegilla before travelling to Orange. During all that time, except for the weekend, we had English lessons every morning. On Tuesday afternoon I was taken to the railway station to leave for Orange. Hilde had to stay in Bonegilla until the people here received confirmation from Orange that I had employment and accommodation.

To store our food, we bought from Emmco, on hire purchase, a ten cubic feet refrigerator.

By the time Hilde arrived from Bonegilla, I had already two rooms at the Commonwealth hostel in Orange allocated to me. It was winter and these huts were extremely cold. After about six weeks at the hostel we moved out, together with our friends Gahtie and Carl. Another German family had rented a house in March Street and were looking for someone to share. Each family had their own room and we shared the use of the kitchen, bathroom and laundry. To store our food, we bought from Emmco, on hire purchase, a ten cubic feet refrigerator. Living together eliminated a lot of duplication. We lived like this for nearly 18 months until Carl and Gahtie had saved enough money to buy their own temporary dwelling in Clinton Street, and we had saved enough to buy another building block and had sufficient money in the bank to qualify for a housing loan.

westinghouse refrigerator
“This refrigerator was virtually the first item we bought after arriving in Orange in 1953. It cost £140. More than 50 years later the refrigerator is in our garage and is used as a drinks’ fridge.”