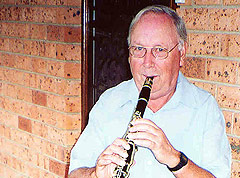 I was born in Valkenwaard [Holland], near the Belgian border, in 1936. Our school was first occupied by the Germans and then by the British and Americans. We’d seen pictures of bananas and oranges and chocolates but we’d never had one and they gave those things out. We went hungry for a while towards the end. Mother used to go to a farmer to get rye to make bread but it cost her all her jewellery. Money didn’t mean a thing. All we had was bread and apples. When the Germans were moving out, one Sunday morning everyone was in the Roman Catholic church and the Germans surrounded the place and took the men on trucks to work in Germany. Dad escaped and he walked all the way from Berlin to Valkenwaard.

My Dad was a muso – he played the double bass – and he came home towards the end of the war but he had to hide.

My Dad was a muso – he played the double bass – and he came home towards the end of the war but he had to hide. I remember the Germans pinching Mum’s pushbike. After the war things settled down. Dad was a cigar maker by trade (they were still made by hand). He played four nights a week in a band. According to him, they couldn’t make ends meet. Mum was German – when she was a kid she was sent to Holland. Dad and Mum decided to go to America but they said no because he had no sponsor. Then Canada, then New Zealand, the same story there. Where can we go? Australia. I was a second-year apprentice toolmaker at Philips.

The food was shocking. We weren’t used to eating lamb. And it was stinking hot.

We were on the boat in September 1954 from Amsterdam to Fremantle and Melbourne. In Melbourne we got the train for Bonegilla. We were six weeks in Bonegilla. We were in barracks. The five of us cried – we couldn’t speak the language and we were homesick and we had to rough it. The food was shocking. We weren’t used to eating lamb. And it was stinking hot.

There were no jobs for cigar makers in the whole of Australia so Dad would get a job as a labourer at Emmco.

After about five weeks, Dad got called to the employment office. You are going to Orange. Emmco was looking for tradesmen. I was a second-year apprentice and my brother was a first-year apprentice. There were no jobs for cigar makers in the whole of Australia so Dad would get a job as a labourer at Emmco.

We went from Albury to Sydney to Orange. We arrived in Orange about 10 o’clock that night. There were two taxis waiting for the Boers family. They took us to the Commonwealth hostel in Edward Street . The next morning there was a Dutch family there – De Graff – and the husband was an electrician at Emmco. Jack Lynch [Emmco employment officer]: ‘Joe Boers – paintshop’. I had my apprenticeship paperwork translated into English but I started as a labourer. Jock Ferguson was a first-class welder making lids for compressors. He would weld, I would take it off Jock and put it in water and test it for leaks.

Leon Kiho [an Estonian migrant] was the chief in the machine shop. Leon said ‘Have you got the paperwork for your apprenticeship?’ He got me my third-year apprenticeship at Email and second-year at tech because of my English. (I was the first ‘new Australian’ apprentice at Emmco and am forever grateful to Leon who had the foresight to push for me to be allowed to continue my apprenticeship.) The only problem was I had to go from metric to inches. Then came exam time at tech. I could understand the question but couldn’t write the answer in English. A Dutchman, De Jong, would translate for me from Dutch into English. Keith did his apprenticeship at Emmco and got offered a job in Sydney.

I had played clarinet in a military band in Holland. I found out about Orange City Band.

I got my apprenticeship in 1957. I had played clarinet in a military band in Holland. I found out about Orange City Band. [Bandmaster] Harry Sloggett had just arrived in Orange from Coonamble. Harry: ‘We’ve got brass bands here – how about you play the cornet?’

The quickest way to learn another language is to go to the movies five nights a week. I walked every night from the hostel to the Strand Theatre and saw the same movie five times. They came to the Commonwealth Hostel to give English lessons too.

We were in the hostel for three or four months till Dad saved up a bit of money (we came over with absolutely nothing). We bought a block of land with a little garage on it with a dirt floor in Frederica Street. It had a lean-to which was a kitchen. There was a curtain in the middle. A shed outside with a chip heater was the bathroom.

My Dad was sacked two months before Christmas [mass lay-offs at Emmco were common in those days]. There was an ad in the CWD [local paper] for a tool storeman at the tech college. He got it and stayed there until he retired. Dad had a lot of help from building teachers with building the house, plus me and Keith.

I was in the Orange City Band. Then we formed the Skymasters band with Dad on the double bass.

I said ‘I want a tin of eedeel milk’ and they laughed at me. How Mum did the shopping I don’t know.

D’Aquinos was our shop. Mum said to me: ‘Go and get some milk’. I said ‘I want a tin of eedeel milk’ and they laughed at me. How Mum did the shopping I don’t know. Mum used to go to the butcher – McKenzie’s near the Strand Theatre. Every night she’d come home with steak. We said ‘get some pork for a change’. She didn’t know how to say it so made snorting noises at the butcher.

When I was in Orange City Band I went and joined the Bloomfield Theatrical Society with [Czech migrants] Danny Broz and Carl Domin. Conductor Harry Sloggett was in the pit. I also joined the sailing club. The Runemans and Boers started Orange Canoeing Club.

We played at balls at the Ex-Services Club, Amoco Hall and CWA Hall. We started at the Star ballroom [Allcorn's]. Greek balls were held at Amoco Hall from 8pm to 5am with us and a Greek band from Sydney. Organisers were Michael and Chris Gryllis. They used to do a lot of Greek dancing. I also joined the Emmco Soccer Club which was mostly Europeans.

clarinet
“I played this old clarinet in Holland. It no longer can be played but I’ve kept it for sentimental reasons.”