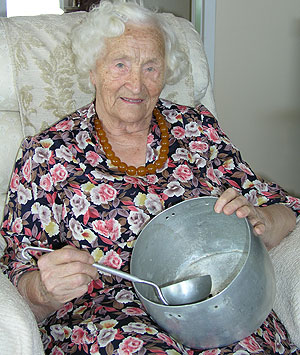 Dressmaker for theatre group; worked in butter factory in Albury

I was born during World War One, in November 1918 and was living on the outskirts of a town called Smiltene in Latvia. I lived with my parents and two older sisters.

When I was four months old my father had to go into the Latvian army [although] he didn’t want to. He sent one letter and we never heard from him again.

…sometimes even when [my mother] did get work she would not have enough food for everyone, so she gave the food to us…

So my mother was left on her own with three little children, in a very unfamiliar and often unfriendly place. She needed to work very hard to get some food, sometimes even when she did get work she would not have enough food for everyone, so she gave the food to us, her children. It was a very, very hard time, but somehow we did manage. Then the war for independence ended in Latvia in 1921.

We all lived in a woman’s refuge for a while after the war until my Mum organised a one room flat in town. My sisters were sent to work on a farm [just] outside. When I was seven years old I was sent out to a farm to look after 35 pigs. I had to keep the pigs moving and so I had to run and run and run, and later I looked after other farm animals. Whatever the weather, I was out in the paddock. I did this for many years in the summer and in the winter I would return home to Mum where I could go to school.

At the age of 14 I had to stop school. After that you had to pay and we didn’t have any money. I learnt how to be a dressmaker through an apprenticeship to a local dressmaker.

It was not so much romance, but my older sister encouraged me to marry. He had a good job…

I met my first husband when I was a dressmaker in a little shop in Riga. It was not so much romance, but my older sister encouraged me to marry. He had a good job as an electrical engineer and was young, only six years older than I, so I assumed I would be happy.

Before I got married I saw a psychic woman. She said, “you are going to get married, but you shouldn’t, your life will be very hard. You will have two children and then you will get rid of him and meet someone else. The second life will be like the first should have been”.

When our first baby was born and I went into hospital, he was not there, he was drinking.

World War Two began and war returned to Latvia. My husband started to drink very heavily. When our first baby was born and I went into hospital, he was not there, he was drinking. Often he would be out all night, very drunk and sometimes with other women.

The Soviets had captured Latvia and were planning to take many Latvians away to Siberia. There was a list and my husband was on it. On 22 June 1941 the Germans invaded and he escaped deportation.

…my sister-in-law and I were caught in crossfire between the German and Soviet troops. We both had our young babies with us…

At this time, as the Germans were invading Latvia, my sister-in-law and I were caught in crossfire between the German and Soviet troops. We both had our young babies with us, we sheltered in a ditch trying to quieten them. I received some shrapnel in my elbow, it is still there today.

The Second World War continued and when the Soviets started returning to Latvia in 1944, after three years of German occupation, there was nothing else but to leave.

We were taken by ship to Gdansk in Germany. There was no food, except I had saved some milk for my son. There were no toilets, but I had a potty for my son so everyone on board the ship used the potty. We travelled for one week.

… before we left Latvia, Mum and I had dried some sheep meat, so my family did not starve.

We were placed in a camp with all nationalities. There was no food; only flour and water and only one piece of bread for the whole day. Luckily, I had prepared for this with my mother’s help; before we left Latvia, Mum and I had dried some sheep meat, so my family did not starve. My mother stayed behind in Latvia.

We lived with cockroaches, lice and fleas. The Russians were covered in fleas and were treated the worst. It was awful. I had to wake everyone when there was an air raid, [including] the tired and hungry men who often slept through them. We were there for six months until war ended.

I was always singing, I loved to sing. Even when I was crying I was singing!

After World War Two ended we were moved to a Baltic Displaced Persons’ camp and stayed there for four years. During my time at the camp I was involved in a theatre group with some other Latvians. I was always singing, I loved to sing. Even when I was crying I was singing! 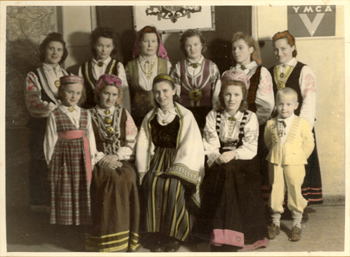 The officers came around with some cooking items that had been made by Latvians who were German POWs (prisoners of war), from aeroplane parts. I said I’d like a saucepan but asked how much would this cost. They said one packet of cigarettes. I didn’t smoke so I paid them 100 Deutsch marks. I received this aluminium saucepan and they threw in the soup ladle for good measure.

…nobody would talk to him. I came over and started talking, soon we were laughing…

I met my second husband at this camp. He had the very difficult job of controlling the kitchen at the camp. It was such an awful job, and he was abused when there was no food. One evening I saw him standing by himself, nobody would talk to him. I came over and started talking, soon we were laughing. He told me straight away, “I love you so much, I want to marry you”. We got married after my difficult divorce and we all left the camp as a new family.

Our camp was in the English zone and there were about 3,000 Displaced Persons. We were accepted by the Australian Immigration Department and travelled down to a camp in Naples, Italy. A measles epidemic broke out and my daughter got very sick. I sold my wedding ring to buy us food so she would get better. We had to wait for Mara to get better and then we had to wait in a queue for many check-ups to get on the ship.

The men and women were separated on the ship, we had to sleep in soldier bunkbeds and keep the ship spotless.

We immigrated in an army transport ship called the General Haan. The men and women were separated on the ship, we had to sleep in soldier bunkbeds and keep the ship spotless. One woman was pregnant and she couldn’t stand up, her husband could not stay with her at first. It was a hard time and so hot on that ship.

After docking in Melbourne, we travelled on the train to Benalla and then onto Bonegilla. The first thing I remember as I was stepping out of the train was that beautiful November eucalyptus smell; it was so clean and fresh. We travelled by bus to the Bonegilla reception centre. We had such a nice vegetable soup, nice grilled chips and lamb chops, but we were not used to fat and in the end we all had running tummies!

…married couples used to go for a walk at night, trying to find some privacy, other couples would be laughing…

At Bonegilla we were sent to the barracks, we were in Block 19. They separated the women and men, we could not live together. It was not good for the children, they wanted their fathers. The married couples used to go for a walk at night, trying to find some privacy, other couples would be laughing, knowing what they would be doing!

We saved up and brought a block of land in Phillips Street, Wodonga so we could live together. We started to build our first home; our house was built from pilings and whatever materials my husband could find. Inside was made from tarred paper, he found a window and some doors which we cleaned up and put into the house. We had one bed, which was an army bed, a double mattress, and one chair; that was how we started. We had an old crate box which we had used to transport our belongings [to Australia]. My husband used [it] to make this coffee table [which] I still have. 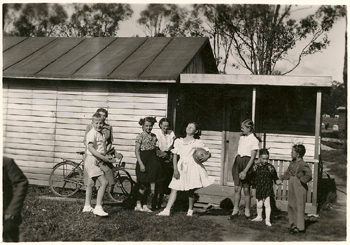 When the children were young I worked at the Adelyn dressmaking factory in Albury. We had to finish 35 dresses in one hour, it was slave labour. Many people got very sick if they worked there for a long time. I worked there for three years and that was enough.

…I made beautiful costumes for over 12 productions. It was good to be involved in the theatre…

When we moved to Albury I joined Madame Savickis’ theatre group; she was also from Latvia. I didn’t want to act or sing though; I just wanted to make the costumes, so I made beautiful costumes for over 12 productions. It was good to be involved in the theatre again.

My husband has passed away now and I often live in my memories of the past, both the good and the bad. I am reminded of the past whenever I look at my saucepan and ladle or simply have a cup of tea and rest it on the coffee table.

coffee table
“An old crate box [was] used to transport our belongings [to Australia]. My husband used [it] to make this coffee table.”

saucepan and ladle
“I paid 100 marks for this saucepan made by German prisoners of war and they threw in the soup ladle for good measure.”