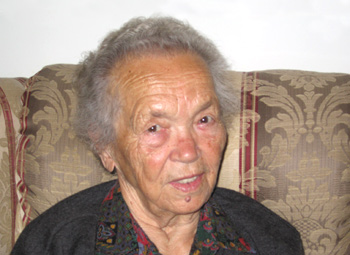 I was born in Slovenia, Yugoslavia on 18 September 1920. We had a small house and there were five children. My father passed away, we didn’t have that much so we had to go and look for work. I got a job with a farmer and stayed there doing domestic work. Then the [Second World] war started and the Germans told us to go to work. The Germans came through and everywhere it said to ‘speak Deutsche’ – talk German – and say ‘Heil Hitler’ when you greet and say hello. You weren’t allowed to say ‘g’day’ or things like that.

There were thousands of people emigrating to escape from their country… because there was nothing to go back to.

When the war finished, half of Europe was bombed and the governments started talking about immigration to other countries; first Argentina and then Australia and America. There were thousands of people emigrating to escape from their country – like Hungary, Bulgaria, Holland, Russia – because there was nothing to go back to.

I spent 2.5 years in a Displaced Persons’ camp in Italy. The camp was a hospital that Mussolini had built for TB (tuberculosis) patients [with] about 30,000 people. It was like a city and in the evening when you’d walk outside, it was like going for a walk in a town.

Every day people left and others came; you just had to wait ’til they called you. Immigration officials told us each morning if we were to see the doctors. If you were on the list, you waited in a tent to see [them]. Then you waited for a week or two to see the Australian or American consul [who] asked why you wanted to emigrate. [I] said there was nothing at home. Yugoslavia was really poor before the war; after the war it was worse.

I put my name down for Australia and America and the first offer came from Australia.

I thought of going to Argentina; my sister went [there]. I had the papers ready but two days before I signed, immigration to Argentina closed because the government was having trouble with new migrants and the people who had lived [there] for years. I put my name down for Australia and America and the first offer came from Australia.

The Australian Consul came around and asked everybody, “are you prepared to take a two year job the Australian Government is going to offer you? If you’re prepared to do that, sign this paper”. You couldn’t go if you refused so naturally we signed. Then we waited [about] two months to come to Australia because there were so many people.

We left Naples on the Castel Bianco on 26 September 1949 and arrived in Sydney on 24 October. We were supposed to disembark in Melbourne and then on to the Bendigo camp but the captain got the news that he had to take us to Sydney because there was some sickness in Bendigo and no-one was allowed to go to the camp.

We came through the Sydney Heads in the morning. Some people were still in their beds and they popped up their heads when I started shouting, “we can see the land; we can see the land!”. Everybody ran up on deck to see!

From the deck we called, “how do you like living here?”. [They replied], “Australia’s very good! Don’t worry!”.

We had to wait until another boat left the port [and] it was 12 [noon] when we docked. ‘New Australians’ that had come years before asked, “which country did you come from?”. From the deck we called, “how do you like living here?”. [They replied], “Australia’s very good! Don’t worry!”.

They transported us from the boat to the train to Bathurst. There were 950 people on the boat and each had a number. I had dining card number 735 and was in the second lot for breakfast, lunch or tea. The same thing happened when the train came. They took the first lot to Bathurst and then came back to pick us up at 11pm.

We saw bush, magpies whistling, crows whistling and we said, “oh my God, where have we come? What’s here? There’s no camps here, no houses…

We arrived at Bathurst at 7am but not to the town’s railway station, we were out in the bush! It was the camp for the soldiers during the war. We saw bush, magpies whistling, crows whistling and we said, “oh my God, where have we come? What’s here? There’s no camps here, no houses, nothing!”. We had to wait until the army trucks came, and they took us to the camp.

We were [at Bathurst for] about three weeks because it was just a camp for them to sort the people out. The married people with children went to one camp, the married people with no children went to another and single girls and boys went to St Mary’s [and] I got a job [there]. There was one interpreter from Slovenia and he spoke good English. I asked him if there was any work and he got me a job in the kitchen for three weeks.

One night an employment man came and interviewed people for jobs. They offered jobs in Queensland but nobody wanted to go. Everybody wanted to be in Sydney so we refused. The next day [he] said there’s a job up at Katoomba. A guest house wanted two waitresses and three girls to help in the kitchen and make the rooms. He explained it’s not far from Sydney so we said yes. On 22 December we [caught] the train to Katoomba. When we [arrived] it was so cold everybody had overcoats on!

We didn’t work that first day. Next morning they showed us what had to be done. We had to start cleaning at 7am. We had to clean the hall, ballroom, lounge room, verandah, staircase and office. [It was] alright but on 24 December, Mr Shepherd, the manager, said, “all you girls tomorrow are going to the dining room”. I couldn’t do it. Another Australian girl hadn’t arrived and so they were short for Christmas. He gave in and I didn’t have to work in the dining room [and] he took the other girls. They had a handful of menus and when people started coming for breakfast they said, “morning, no speak English.” I was 29 when I came here and they were younger. They had more courage. They were not ashamed to stumble but I couldn’t do it. I just couldn’t do it, you know I was ashamed. I didn’t want to do something that they laugh at.

…I married Ivan Cetinich in Broken Hill on 11 November 1950. He was a naturalised Australian…

When I worked in Katoomba I earned three pounds a week. We had to work six days, not five, because of the government contract, but [it ended] when I married Ivan Cetinich in Broken Hill on 11 November 1950. He was a naturalised Australian so when I married I didn’t have to finish two years’ work. Ivan was 12 years when he, his brother and his mother come out here from Yugoslavia; now it’s called Croatia. His father came out eight years before [working] on the mines [in Broken Hill].

I met Ivan four days after I arrived at St Mary’s camp. He was working in a factory as a fitter and he came to the camp looking for two girls who worked there. We talked and I asked him questions [about] Australia, learn[ing] the language and things like that.

…he brought me to Broken Hill to meet his father and mother. I loved it here…

After that he came every day. Then I said I was going to Katoomba. He came to Katoomba and then he brought me to Broken Hill to meet his father and mother. I loved it here [Broken Hill] at the time because it was winter [and] it was nice and sunny; it rained every day in Katoomba. In Broken Hill we went out in the bush looking for rabbits [and] Ivan took this photo. I thought I would like to live here [and] my husband, well he was my boyfriend at the time, [asked me to]. 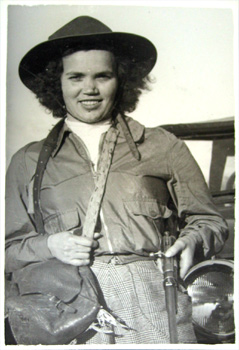 When I came to live in Broken Hill in September 1950, I was the only girl from Slovenia. That hot weather came around! No air-coolers; no fridge. There were water restrictions [and] no water in Umberumberka (holding station for Broken Hill water) [or] the water storage dam at Stephens Creek. They carried water on the train from Menindee. From 8am to 4pm there was no water at all. It closed down so you washed early in the morning if you were allowed to.

We lived with Ivan’s parents in Piper Street for three years to save money to buy a house. I said I’d like to go to work but there was not a chance for married women. Then in 1954 we bought this house and things started getting better. I dug up the ground for the garden because there was nothing here. It was just dirt. I grew all my own vegetables; pumpkins, cabbages and all those things.

We spoke mostly Yugoslav in the home but once the children started school, naturally they were talking English.

It was difficult learning English because if you don’t understand, you don’t understand. It’s as simple as that. But thank goodness I picked it up quite quickly. I didn’t go to school or anything. We spoke mostly Yugoslav in the home but once the children started school, naturally they were talking English. If I had stayed in Piper Street where there were people who talked Yugoslav all the time, it would have been more difficult to improve my English.

My sister in Argentina passed away in 1998. A month before I went to Slovenia and hoped to meet her there but she was too sick to go.

…my daughter took her place as she couldn’t come and then she passed away. We never saw each other again.

My son was in Switzerland where they have a competition to visit another country. He wrote that his mum is in Australia and hasn’t seen her sisters in Slovenia and Argentina since the war finished. And so he won two prizes to bring the sister from [Argentina] and me to Slovenia. It so happened my daughter took her place as she couldn’t come and then she passed away. We never saw each other again.

I was given this photo when I was in Slovenia in 1998. The owner [of the photo] was living close to my sister there and she came to see me. There was a little girl at the front who didn’t want to be in the photo because her dress was torn. She said she was that little girl! 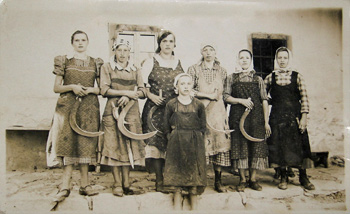 The photo was taken in 1939 and I am third from the left. I remember it was July or August when it is summer over there and the time wheat is ripe and you have to cut it. All day I bended down [to] make bundles. It was hard work. When I was doing the job and the evening finished, we come around to the house and the photo was taken.

Everybody’s nice here in Broken Hill. After Ivan died, my sister [in Slovenia invited me to] come back and settle there. I couldn’t. I’m too long in Australia and am comfortable. I’m happy.

postcard
“I still have the postcard of the boat I arrived on. The Castel Bianco was supposed to disembark in Melbourne for the Bendigo camp but we were taken to Sydney [instead]. There was some sickness at Bendigo and no-one was allowed to go the camp.”