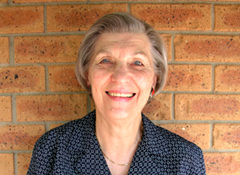 Bonegilla for 21 months, then Bathurst for 3 months

Boarded with a family in Lavington, Albury

My name is Eleonora Conolly. I was born in Serbia, in the former Yugoslavia, on 19 August 1931. My father was a major in the Royal Yugoslav Army and he was also a civil engineer. My first six years were spent in Serbia, then my father was posted to Logatec, a small town in Slovenia near the Italian border, working on fortifications as war seemed imminent.

I attended school in Logatec and have very happy memories of these two years. My mother’s health was not good, causing us great concern and distress, but my memories of that time remain with me as best, seeing what followed in the years ahead.

My father had to report to duty and we relocated to my grandmother’s in Belgrade. War found us on Orthodox Easter Sunday morning. We were all dressed for church when the German bombs started falling without warning on 6 April 1941 [when] Yugoslavia [was] invaded.

Later that year, just before Christmas, during the night the German army police came and took my father as a prisoner-of-war (POW). When my mother told me what happened I was heartbroken not to have been allowed to say goodbye.

We lived in fear. It was a time of coping, doing what you can. Humans are very resilient…

During the war it was a life of struggle. We never had enough food and were often cold. We lived in fear. It was a time of coping, doing what you can. Humans are very resilient. My mother had been very ill on and off for several years and she died in February 1942, aged 31 years, and I was ten years old. I felt so totally alone – not knowing where my father was and now no mother. I was fortunate to still have my loving grandmother, aunties and uncles, but it was not the same.

It was a long time before we heard about my father. He was in a POW camp until nearly the end of the war. I didn’t know what my future was. Would my father come back to Yugoslavia? Would I ever see my father again? The difficulty was that the Communists were taking over Yugoslavia. Fortunately, towards the end of the war, my father was released and offered to work in Germany, on a construction site.

There was so much uncertainty. Would I really meet my father? Would I be taken crossing the border?

During this time my father organised a false passport for me to travel to Germany and come to live with him. There was a train journey overnight to meet my father. I was leaving the security of my grandmother’s home in Belgrade. There was so much uncertainty. Would I really meet my father? Would I be taken crossing the border? I was so young, it was very daunting. Luckily, it all went well and I was reunited with my father in Germany.

Before I left Belgrade my grandmother helped me pack a few scarce belongings. One precious item was my mother’s serviette ring. It is engraved with her name, Olga. I use this serviette ring almost daily, a reminder of a loving but too brief life with [my] mother.

…my close friends, who lived not far from our home, gave me a small, carved, wooden horse as a parting gift.

My father remarried and later my sister was born. After the war we stayed in Germany for four years before immigrating. It was there that I learnt English, German, Russian and French. I seem to have an easy way with languages. On our departure, my close friends, who lived not far from our home, gave me a small, carved, wooden horse as a parting gift. I used to go riding and this was to remind me of my riding and their friendship.

The reason for our immigration to Australia was because my father as an officer in the Royal Yugoslav Army was unwilling to go back to Yugoslavia under the Communist regime. I immigrated with my father, stepmother and sister. We left Germany on 9 April 1949 and spent almost two weeks in transit at Bagnoli, near Naples in Italy. From here we boarded our ship, the Skaugum. There were 1,700 migrants on the ship. It was a very small ship, so I thought and it would not even cross a lake, let alone an ocean, but we sailed safely.

During part of our voyage we ran out of fresh water for showers and washing, so we had to use sea water. We had a small breakdown and were docked in Aden for three days for repairs. From Aden we sailed straight to Station Pier, Melbourne arriving on 30 May 1949.

We stayed overnight on the ship and then travelled by train to Bonegilla. Our train journey was very strange to us as we saw many unusual sights. We saw houses with front verandas and posts [and] thought these homes looked like the Wild West in America. Once we arrived at Bonegilla we were ferried by bus to the reception centre [where] our papers were processed and we were given a meal. Not many of us ate as we did not feel very hungry. It had been a long, emotional day.

We were then separated into groups for our lodgings: single and married women without children, women with children, and the men. We were all placed in different huts and separated. I was placed in Block 21 with 12 beds running down each side. It was just as the army had left it and we moved in!

We had no privacy, I had to undress in front of all these strangers and the toilets were some distance away outside.

It was close to midnight and most of the women were asleep. The lady next to me nodded and said hello. I found out she was from Yugoslavia too [and] she offered me her hot water bottle. I was very grateful and snuggled under those heavy army blankets with the hot water bottle and slept ’til morning. That was my first night in a new land in new circumstances. I was 17½ years old. We had no privacy, I had to undress in front of all these strangers and the toilets were some distance away outside.

We were not used to the food: chops, sausages, tomato sauce, plenty of butter, and vegemite. It was the smell of mutton that lingered with me for years even after I left Bonegilla. It was on my tea towels and clothes no matter how much I tried to wash the smell out.

At Bonegilla, they were after extra staff in the finance office; I was interviewed and given the job. I started to work 16 days after my arrival. This was my first job as I had just left high school in Germany. My father left for a job in Melbourne with my stepmother and sister, I stayed on happily at Bonegilla.

The young men in the office showed me how to play cricket. I was the youngest there…

There was a good rapport in the office as we all spoke English and I think the Australians working [there] really appreciated this. In other sections, different migrants stuck together and spoke their home language. We deliberately did not do this, even if our English was not perfect. Sometimes we worked overtime at the finance office, but it was always fun. The young men in the office showed me how to play cricket. I was the youngest there and everyone in the office seemed to look out for me.

I spoke five languages and this was very helpful. My job was as a typist but I also did a lot of interpreting, timesheets and wages. My work was very varied. One evening when I was making toast at the office, I cut my finger. I exclaimed, “Look at the bloody knife”. “You shouldn’t say that”, said a colleague. She explained to me how the word “bloody” was used in Australia – I was put right to that!

Two people [would have] trouble fitting in the room together, but it was my own room, my own little kingdom.

One of the benefits of working at Bonegilla was that the staff had their own room. My hut was in Block 19, number 100. You had just enough space to put your bed in from wall to wall, a small wardrobe and I was able to get hold of a chair. Two people [would have] trouble fitting in the room together, but it was my own room, my own little kingdom. We also had our own dining hall for the Bonegilla staff with tablecloths – what a luxury!

I stayed at Bonegilla for 21 months. Towards the end of my contract I went to Bathurst migration centre to relieve at the employment section. After my two years had finished, I returned to Albury and lived with a family in Lavington [near Albury] for a year. They are still my friends to this day.

At my father’s request I moved briefly to Melbourne where I obtained a position at a solicitor’s office in Collins Street. It was a wonderful job and I enjoyed working there, but it was only for three months. I left to be married.

My husband was from Sydney and I met him at Bonegilla while he was working there as an employment officer. He was a great bushwalker and I loved bushwalking too. We married in 1952 and lived in Albury.

…we used kerosene lamps, tank water, outside toilet and an open fire place to keep warm. After five years there, I was quite good at pioneer life…

My husband’s job with the Forests Commission took us to the township of Erica at the end of 1952. He was in charge of the forestry office which was next door to our neat weatherboard home. Erica had no electricity, reticulated mains water or sewer hence we used kerosene lamps, tank water, outside toilet and an open fire place to keep warm. After five years there, I was quite good at pioneer life but would not want to do it again.

We have had a daughter and two sons and I chose not to work until my children went to school.

From Erica our family moved to Melbourne for one year and lived with my father, then to Morwell, Gippsland for six years, followed by two years in Canberra and then back to Melbourne for 30 years. I have now come full circle and retired in Albury Wodonga, the home of Bonegilla.

migrant accommodation identity card
“Once we arrived at Bonegilla, our papers were processed and we were given a meal. Not many of us ate as we did not feel very hungry. It had been a long, emotional day.”

serviette ring
“In Belgrade, my grandmother helped me pack a few scarce belongings. One item was my mother’s serviette ring, engraved with her name, Olga. It is so precious because my mother died young and I was just a child.”

migrant accomodation staff card
“One of the benefits of working at Bonegilla was that the staff had their own room. It was my own room, my own little kingdom. We also had our own dining hall with tablecloths and napkins – what a luxury!”

wooden horse
“When leaving Germany, my school friends gave me a small, carved, wooden horse as a parting gift. I used to go riding and this was to remind me of my riding and their friendship.”