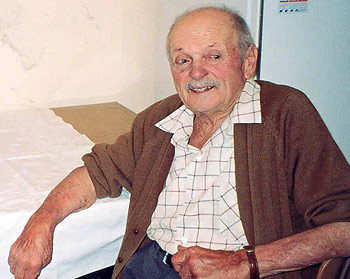 I stayed with relations in Orange, then moved to a cottage on Wally Parish’s orchard.

I worked for Wally Parish, an orchardist in Ophir Road, near Orange.

I worked for Aldo and Pasqua Centofanti on their orchard in Clergate and then my own orchard at Nashdale, next to my brother Joe’s.

[Regarding his migration journey] I only had one change of clothes and brought the wooden case with barbers’ tools with me. I never paid for the case because a man made it in return for cutting his hair. I had been conscripted into the Italian Army and one of my jobs was to cut my company’s hair [1st Infantry Regt, in 5th Company at Cividale, Udine]. There were about 60 men and I cut their hair for 18 months.

It was an old bomber plane. There were 27 places but over 50 on the plane. I was lying down on the floor and I held onto the pilot’s seat.

I came on the first plane after the war in 1948. I had paid 100,000 lire deposit for the boat trip but something happened and I lost most of the money. I borrowed money from relations already in Australia and came by plane from Rome. It was an old bomber plane. There were 27 places but over 50 on the plane. I was lying down on the floor and I held onto the pilot’s seat. We had engine trouble over India and we were there for about a week. We were put in old army barracks in India and we were bitten by something that was not fleas but they were so big it wasn’t funny. When the plane had to take off everybody had to go to the front.

I arrived [in Australia] in 1948. My father had come to Australia in the 1920s but had returned to Italy. My brother Andrea was already in Australia and a couple of uncles were in Griffith.

The reason why I didn’t come with my brother and two uncles was because I was in the army.

Nine months later my wife Antonia came with our daughter Elvia, aged 18 months, my brother Joe, sister Angela Cunial, future brother-in-law Isidoro Vardanega and Frank Bastianom. I came straight to Orange because Andrea was already there. I came by train.

As for my barbers’ tools I only used them on family members in Australia, and never for money.

As for my barbers’ tools I only used them on family members in Australia, and never for money.

My impressions of Australia: open country, good people. but the flies were bad! I knew this was the land for me.

Mr Antonio Cunial died recently, aged 90. The Migration Heritage Centre is grateful for his recollection which has been recorded in Belongings for posterity.

Wooden case containing barber’s tools: a shaving brush, another brush, a cut-throat razor, a penknife and a leather strap for sharpening razor
“The worn wooden case, now dilapidated, was made in 1942 by a man in return for me cutting his hair. I brought the hairdressing tools to Australia just in case they may become useful. The name on the knife, “Valcavasia”, is the company which made knives from Cavaso del Tomba, the town next to where I was born.”