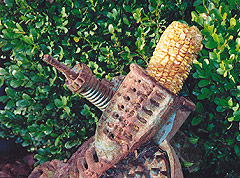 Stayed with my brother in Orange, then Tarsilla came over from Italy. [Joe]

My brother and I bought our own orchard in Nashdale, Orange. [Joe]

Joe: I come from a little place called Possagno in northern Italy about 90 kilometres from Venice. My brother was a bootmaker and during the war I started working with him when I was aged 11. We came to Australia in 1949 – me, my sister Angelina, future brother-in-law Isidoro and my brother Tony’s wife, Antonietta. We came straight to Orange because my brother Andrea already had a property here.

There was an orchardist who knew my brother. The orchardist said ‘You’ve got your brother – can he come and work for me?’ ‘Well, my brother said, ‘I don’t think he knows much about orcharding’.

We used to go down and dig rabbits out – I thought it was good fun but I didn’t know why Jack wanted to kill the rabbits.

He said to come out and I stayed there four years. Jack taught me all about orcharding and I taught him how to fix shoes. We used to go down and dig rabbits out – I thought it was good fun but I didn’t know why Jack wanted to kill the rabbits. I used to go home at night with my brother and tell him what was happening. He used to explain things to me so that I knew what to do the next day. We used at first to take the best part of the rabbits and eat them but then we got sick of them.

Jack and I used to communicate in sign language – he was very good at that. It took me a fair while to learn English because I didn’t have the patience to ask too many times.

Because my brother Andrea had been living down in Griffith and knew the Griffith area he said, ‘why don’t we go down to Griffith and buy a big property together?’ At that time he spoke English better than me and he went to the bank manager and said, ‘can you write me a letter so I can show it to the bank manager in Griffith ?’ The bank manager said: “That’s no trouble but why do you want to go to Griffith . Can’t you buy a property here?” He said ‘there’s none for sale here’. The bank manager looked in the paper and showed us one for sale. My brother Tony and I came up and we liked it and we bought it together. We were the first Italians to have orchards in the Nashdale area of Orange – in September 1953.

The orchard was very run down and everything was in a mess – blackberries higher than the trees.

We weren’t making any money at first – there were only a few trees and a lot of blackberries. The orchard was very run down and everything was in a mess – blackberries higher than the trees.

Tarsilla: I came from a town about three kilometres from Possagno. It was rare for Italian migrants to settle for an Australian girl. Their dream was to go back to Italy, meet their future wife and get married in Italy. In 1958, after nine years in Australia, Joe went back and he was searching for a girl.

I was a dress designer in Italy and I didn’t want to marry someone on the land, but when I came here I thought at least he’s got a piece of land and a house here. A friend of mine got married and went to live in Queensland and her husband didn’t have a house, didn’t have anything, and they had to sleep in a tent in the bush.

The first year I was here I was eating egg, chook, a bit of bread and milk from the cow.

The first year I was here I was eating egg, chook, a bit of bread and milk from the cow. We never used to buy anything because we could not afford it. My sister-in-law used to make a bit of cheese and butter and we got milk and vegetables from the garden. We were largely self-supporting. Over the next few years we struggled a lot but the ground was good. We had five children close together – Robert, Ivan, David, Anna and Lisa.

…when the kids started going to school I had to learn English. You didn’t know how to communicate – it’s an awful thing.

When I came to Australia I didn’t speak English but I had my sister-in-law and we were talking Italian all the time and it was not too bad. But when the kids started going to school I had to learn English. You didn’t know how to communicate – it’s an awful thing. But I did find some people were very good to me, especially the people here – we had some good neighbours. I think that’s what made the difference for me. They were helping all the time and that meant a lot to me.

All my life I’ve accepted what I couldn’t change. I’m happy with what we’ve achieved and I enjoy having my family and friends here but I miss my friends from my youth and my family in Italy. I live with two hearts – one here and one in Italy .

dress design and teaching books from Italy
Tarsilla: “I made them and brought them with me in case I had the opportunity to work in that area in Australia. They gave me the courage to come to Australia.”

copper polenta saucepan from Italy
Tarsilla: “That’s the way we’ve made polenta for thousands of years – put the saucepan on a chain and over an open fire. You couldn’t buy polenta in the shops in Orange in the 1950s but we had an Italian person coming from Dubbo selling things. Without polenta we’d be dead!