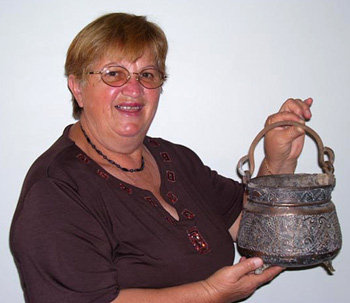 Relatives home in Melbourne for 2 nights; then my godparents’ home in Broken Hill for 2 weeks. After that I lived with my husband, Nick, in Broken Hill.

I cooked at the Mikado Café, Annexe Fish Shop, Ben’s Fish Shop, Centennial Hotel and the Ozone Café in Broken Hill. I also worked at the Overlander Motel as a cleaner.

I was born in Kato, Merope, Greece on 12 December 1944. Greece was spoiled for many years after the Second World War. The economy was in ruin and there was a lot of unemployment. It was not a very easy life at that time because our country was so poor after the war and you thought Australia was the place to be.

…my mum said to me, “I don’t want you to go to Australia but I don’t have much to support you.

I had four sisters and one brother and when the opportunity arose for me to come to Australia, my mum said to me, “I don’t want you to go to Australia but I don’t have much to support you, you would be only working in the home. If you want to go, go.” I was the only one of my family to migrate to Australia; three sisters migrated to Germany and my brother stayed in Greece.

I came to Australia in 1963 to marry my husband Nicholas Drosos. He had seen a photo of me through my godmother who lived in Broken Hill and asked me to come. I’m 14 at that time and he is 28; I am underage. I have a letter from my godmother after three years [saying] Nick still wants me. Nick wrote a letter to my father and he said, “You go. He’s a good man. You will have a good life because he is very honest.” Nick sent a photo of himself and I thought he’s not my dream, but I say yes! 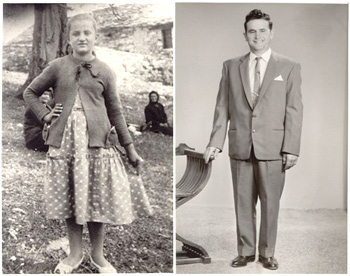 Anything could have happened in Australia; I knew no-one and married my husband through a photo.

Today, would I let my daughter go to America to marry a stranger? No way! I was young and didn’t think clearly. No matter how poor my own country was, at least I was where I belonged. Anything could have happened in Australia; I knew no-one and married my husband through a photo. I still have the photos; they’re a good memory. Very, very special. I think now how very lucky I was because Nick is a very lovely man.

My mum gave cooking pots for me to take to Australia and said they’re something to remember when I am grown up, treasures I can’t find now. One, tsoukala, has a handle on top; the other, the kakavi, a handle on the side. I remember old times and I remember my mum; she was a beautiful cook. My mum used them to make stefatho, like a stew; in there with rabbit, wine and a little bit salsa, garlic – beautiful. After that you put it on something like pastry and close and all the steam stays inside. Oh, beautiful – all the aromas that come out when you open – we cooked on wood on a very low heat. My dad is a very good cook [too] and he cooked for weddings, anything in the village, big parties. 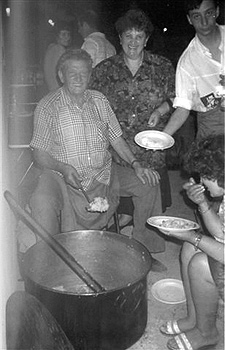 I come from the village where everyone saw me off and then my father brings me to Athens by tractor.

The morning I left I cried so much. I woke up my neighbours from my loud crying; it was then I realised I was leaving. It’s very hard because you left all the people you love and you come here and [there's] nobody. I come from the village where everyone saw me off and then my father brings me to Athens by tractor because it is winter [with] snow.

I came out on the Greek ship, Patris. It was a beautiful trip. I left Greece on 24 December 1962 and arrived in Melbourne on 17 January 1963. I lost my baoulo, which is like a big suitcase, because I put on it ‘Sydney’. I had the dress for the wedding [reception], the engagement rings, clothes and the two pots from my mum [in another suitcase]. Everything else I lost in the baoulo.

My godfather came from Broken Hill to meet me. We stayed one night in Melbourne with family; I was very shy and worried. I then flew to Broken Hill where Nick was waiting at the airport. I had never flown before, let alone in a small plane. Oh, it’s not easy.

When I come here I didn’t dream that Australia was like that. I was thinking it was more rich. In Broken Hill the houses were wood and iron and it was very dusty in the old times. You see everywhere is dust, no green, nothing. And I am thinking, oh my. I slowly get used to it.

We had a small wedding and I wore a borrowed wedding dress. At the reception, I wore the dress from Greece. I have kept it.

I stayed with my godparents until I married Nick two weeks later. We married in the Greek Hall because the Greek Orthodox didn’t have a church in Broken Hill. The Greek priest came here and we were married with another couple because it was too expensive to bring the priest up to marry one couple. We had a small wedding and I wore a borrowed wedding dress. At the reception, I wore the dress from Greece. I have kept it for a souvenir [of] good and sad memories; after I come here all my relations are in Greece. That’s one thing I miss.

We had a few people at my godmother’s place [for the reception]; at that time there was not a lot of money. In the old days you were scared to spend too much. The old times are like in my village. You can’t find anything in the shops, not even sugar you can find properly. Everyone buy in bulk from Adelaide but slowly, come the big shops.

I was very lucky; I came to a house and furniture; everything. Some poor people came with their kids and it was hard for them.

From that time I stayed here in this place (present home) for over 40 years. I love Broken Hill and the people are friendly. I have two lovely kids, Alexandria and George, and I have a good life with my husband. I was very lucky; I came to a house and furniture; everything. Some poor people came with their kids and it was hard for them. For me, I was very lucky; Nick’s a very good man. He has given me a good life. Nick saved his money before I came. Some husbands and wives came together and they didn’t have anything here and they suffered at times. 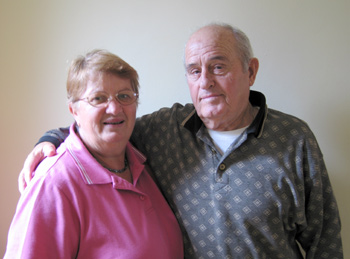 I found it very hard with the language; that did worry me. I find it hard going to the doctor or a bank; terrible, terrible. I take Alex with me to the doctor but when she was little she sometimes can’t explain properly the English. It’s very hard, those things. I listened to the radio because there was no TV then and thought I would never understand. I always spoke Greek at home and to my children. My kids speak very good Greek and I speak to my grandchildren in Greek.

when I came, there were a lot of Greek people here. The old times here were good. Beautiful dances and food.

At that time when I came, there were a lot of Greek people here. The old times here were good. Beautiful dances and food. It’s nice to be around the Greek people [because] I don’t speak [English] very well. Now there’s not so many Greek people in Broken Hill. The kids go to Melbourne, Adelaide and Sydney and the parents [follow].

There is no work [for me] at first. Work is for the men and single women [in Broken Hill] so I look after the kids. Nick is working in the mine underground. It’s scary and always you worry because it’s not very safe. All the women in Broken Hill are scared.

After many years I start cooking in the shops – I love to cook – and I gradually picked up English because I mixed with Australian people there. The shops were owned by Greek people: the Mikado Café, Annexe Fish Shop, Silver City Milk Bar, the Ozone Café.

I’ve got Greek recipes [including] my mother’s. I often say my mother is cooking the meal when I use her recipes!

Like I say, I love to cook. I cook Greek food and have catered for special occasions. I’ve got Greek recipes [including] my mother’s. I often say my mother is cooking the meal when I use her recipes! When someone come from Sydney and say what restaurant to go to eat, my son-in-law he say he never go to the restaurants and the best cook is his mother-in-law. And my granddaughter asks am I the best cook in the world? And I say a lot of people are better than me. She says then I am the best cook in Broken Hill!

Everyone likes a spinach pie called pitta in Greek and it’s easy for me. Now I get old and don’t remember, I write down the recipes to give to my daughter to keep. She wants my recipes! My daughter cooks Greek food and my son is an excellent cook. I love to cook and help people. I have been a volunteer for lots of groups; I worked for Meals on Wheels and HACC (Home and Community Care).

The ‘Australian’ people have always been very nice to me. Alex talks about the kids being cruel at school but that was not so with the older people. Some people called Nick a grill but I never experienced that. We have good neighbours but we are also good neighbours. We are very quiet and don’t interfere with anybody.

And I never, never going back. I love Australia and l love Broken Hill…

I say to my husband I come for five years but now Nick has 50 and I have 42. Many others from Greece are the same. And I never, never going back. I love Australia and l love Broken Hill. Broken Hill is very nice and a very good place to retire.

I couldn’t stay in Greece, I don’t like their rules. I would never go back because I’d miss my kids. Look what happened to me, I missed my family. I didn’t realise I would miss them so much. I wouldn’t want that to happen to my kids. My two kids and two grandkids are what I have in this world.

wedding reception dress
“We had a small wedding [reception] where I wore the dress from Greece. I have kept it for a souvenir [of] good and sad memories; after I come here all my relations are in Greece. That’s one thing I miss.”

mother’s Greek cooking pots – tsoukala & kakavi
“My mum gave cooking pots for me to take to Australia and said they’re something to remember when I am grown up. I remember old times and I remember my mum; she was a beautiful cook.”

mother’s cooking recipes
“I love to cook and use my mother’s Greek recipes. I often say my mother is cooking the meal!”