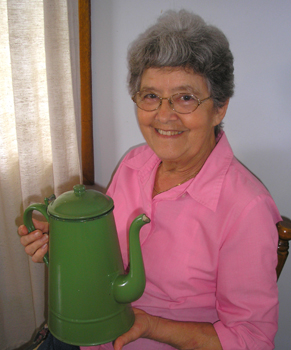 Bonegilla for a few weeks

I left the Netherlands with my family on 3 June 1953 on the ship Johan van Oldenbarneveld. There were my parents Tony and Ann van den Broek and my six brothers and two sisters. We had a farm that was near the Belgium border. My father had decided that it was too small to divide up amongst my brothers for them to make a living. Then there was the concern about my brothers being conscripted into the army. My father didn’t want that so soon after World War Two. We had had enough of the war. So the decision was made to immigrate.

The first choice was Canada, but Dad had a hernia so they wouldn’t accept him. Then he went to France to have a look and check that out, but it was too poor a country after the war and they still ploughed with bullocks. Dad thought that was very backward. So Australia became the family choice. My eldest brother Lou had a sweetheart and didn’t want to go. Dad explained that he was needed to help set up the new farm and if after one year he still wanted to return to Holland, he could. Our relatives were not happy that we were moving so far away and my father’s family always blamed my mother for taking my father so far away from them.

The farm was sold to family members; men came and packed up everything we thought we would need in Australia into two big packing cases. These would later be used to build a chook house at our farm at Tyalgum in northern New South Wales. We brought our fridge, washing machine, pushbikes, stoves, clogs, household items and kitchenware.

One of the main items we brought was an enamel pot because coffee was very much drunk in Holland. And always we added a little bit of chicory, which gave it a bit of a stronger, bitter taste. It was mainly used for family meals, because when you had visitors you brought out the better ceramic one.

Dad hired a bus to take us and other family and friends to the wharf to say goodbye. I have a group photo of the family taken before we went aboard and my little brother Peter can be seen holding my little doll that I brought with me and still have. I got [it] for Christmas one year, when I was about ten years old. I never gave it a name, but we used to put hair on her head from the horse’s mane and plait it and glued it on somehow. I made clothes for her.

…we went exploring the ship and found ourselves in this magnificent first class lounge. It had beautiful chandeliers, carpet and tables.

The voyage was a great holiday for us kids, but a busy time for my mother with the small children. I made friends with another girl and we went exploring the ship and found ourselves in this magnificent first class lounge. It had beautiful chandeliers, carpet and tables. We found a packet of cards on one of the tables and started playing with them, before a ship’s steward found us and took us back to where we should be. It was fun while it lasted! I remember watching dolphins and flying fish from the deck. Dad was bored when the ship was out of sight of land, saying it was going too slow.

Our first port of call in Australia was Fremantle in Western Australia. Then we sailed on to Melbourne across the Great Australian Bight – a very rough crossing. Everyone was sick. All the deck furniture was lashed down and the stabilisers were put out. On arrival in Melbourne we were met by a cousin who had been two years in Australia. They saw us off on the train to Bonegilla migrant camp, near Albury on the Victorian-New South Wales border.

…when the family were settled at Bonegilla, Dad and Lou set off to find a farm.

This accommodation was a shock after the luxury of the ship! The food was strange and we were expected to eat it all – not leave it or throw it out. The toilets and showers were very basic; they were built of corrugated iron with cement floors. Our family migrated to Australia at our own expense, so when the family were settled at Bonegilla, Dad and Lou set off to find a farm. We were supposed to live in Victoria. But at the time of our arrival there were no farms available there, so they set off for northern New South Wales and arrived in Murwillumbah [in the Tweed Valley] looking for a share farm to work so they could learn about Australian conditions.

After a few weeks, word finally came from Dad to come to Murwillumbah. Mum packed the children up and left the migrant camp travelling all the way by train with eight children, stopping overnight in Sydney where we enjoyed the luxury of hotel accommodation. Dad and Lou and two Catholic priests met us at the local railway station and the priests drove us to the property at Palm Vale. The house was too small for all of us, so two rooms were added to the house. Two of the boys slept at the landlord’s house. My brother Harry was sent to a farm near Mullumbimby, which was very lonely for him as he had no English. Tina was sent to do housework duties. Louise, me and the three youngest boys were sent to local schools while the youngest, Tony, stayed home with Mum.

Our first Christmas in Australia was in 1953. In the afternoon we had a dreadful hailstorm – hail the size of golf balls. It was a ‘White Christmas’!

While at Palm Vale, Dad bought an FJ Holden car to take us to town and Mass. We all managed to squeeze in. Our first Christmas in Australia was in 1953. In the afternoon we had a dreadful hailstorm – hail the size of golf balls. It was a ‘White Christmas’! However the house had a fibro roof and walls and there was a lot of damage. Everything got wet and there was an awful mess and it took days to clean up. The following February, 1954, the Tweed had one of the biggest floods ever. Luckily we were on a hill at Palm Vale where we could see the valley in flood. Eleven houses were washed off their stumps and washed away. On seeing this Dad exclaimed, “What have we come to, a country with such crazy weather!?”

In mid-1956, Dad bought a 124 acre dairy farm at Tyalgum. When we moved in he said, “Now we are home. We are our own boss now”. There was a little creek where we used to spend hours playing. There was a lot of clearing to be done to improve pastures on the new place for small crop [vegetable] growing. There were many stumps and fallen trees to be burnt, blady grass, bracken fern to be dug out, and all this was done by hand. Mostly we set fire to the stumps and burnt them out and us kids had a competition to see who had the biggest fire and whose fire burnt the longest. There were good memories. We settled into our new way of life and Lou never did go back to Holland.

Dad had farming ideas from Holland that he wanted to introduce here, such as how to increase his milk production. Also he fed his pigs three times a day instead of the usual once a day and had a better growth rate and meat production. When he told one of the local farmers he worked for how to increase milk production on his farm, that farmer passed the information on to other farmers while talking in the pub. And their response was, “Are you going to let a ‘New Australian’ tell you how to run your farm?”

I didn’t enjoy my school days…the kids made fun of me. As soon as I was old enough to stay home and help on the farm, that’s what I did.

I didn’t enjoy my school days because of the language problems. It was the custom in Holland for a birthday girl to wear her special white apron to school so that everyone knew it was her birthday. I begged Mum to let me wear my apron and I did, but wished I hadn’t! The kids made fun of me. As soon as I was old enough to stay home and help on the farm, that’s what I did. We made friends through our church community and their social activities, especially at Christmas time. However Christmas in this new place was so different to Holland – the seasons were all back-to-front.

I met my future husband, Danny Goulding, on a blind date in 1959. We were married and had four children and they in turn have married and had children. Now I have ten grandchildren. I still have my little doll, but my grandkids don’t think it is a doll because it’s celluloid!

Danny took me back to Holland on a couple of occasions to revisit my family there. He passed away in 2003. I have been having dialysis on a regular basis and in May, this year, 2007, I received that special call to the hospital where I had a transplant immediately. It went very well. I’m so much fitter and don’t have to make three trips a week to the hospital anymore.

A new road was built from Tyalgum to Murwillumbah and a short access road was given the name ‘van den Broek Road’. Australia is my home, but Holland will always be the country of my birth.

Bringing the family coffee pot over here and using it again in Australia brought back memories of Holland, I guess – the mealtimes, the smell of the coffee. I now still have it with me, and its matching teapot. I put it on the shelf in my kitchen above the pantry where it is on show.

celluloid doll
“One of my treasures is the little doll I got for Christmas one year, when I was about ten years old. I never gave it a name, but we used to put hair on her head from the horse’s mane and plait it and glued it on somehow. The doll played one of the kings in a Christmas play when I was going to school in Australia.”

coffee pot
“That was one of the main items we brought because coffee was very much drunk in Holland. Bringing it over here and using it again in Australia brought back memories of Holland, I guess – the family mealtimes, the smell of the coffee.”

The van den Broek family leaving Amsterdam, Holland for Australia with friends, June 1953
“I have a group photo of the family taken before we went aboard and my little brother Peter can be seen holding my little doll that I brought with me and still have.”