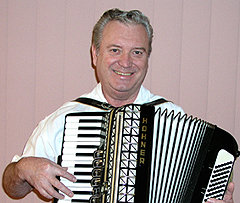 Electrician at Snowy River Scheme and Bandiana army base.

My name is Peter Paul Gwosdz, born on 4 November 1944 in a town called Hindenburg which belonged to Germany then; I was born as a German. My father was in the German Navy and after the end of the [Second World] war he came to pick us up, but after his arrival the border closed and we could not return to Germany. We spent 13 years under Communism in Poland where my brother and sister was born.

We had to stand in queues to buy bread twice a day. There were fights as the bread ran out…

For better or worse we had to steal potatoes and coal just to survive. There was no infrastructure, we did not even have water, I had to carry water to our home. We had to stand in queues to buy bread twice a day. There were fights as the bread ran out and the next person had to wait until morning. I did not see a banana for many years; we had two oranges once a year at Christmas. It was simply poverty; very, very scary.

In 1956 we had a school visit to Auschwitz [concentration camp]; because I was born as a German and not Russian or Polish that was my punishment. I was 10 years old and still remember the words at the top of the gate; Arbeit macht frei (work makes free).

We were held hostage for one year after my father left, it was political, and eventually we were released…

It was a dangerous time. My uncle was in West Germany and when my father went to visit him he did not return, he needed a specialist operation that was not available in Poland. We were held hostage for one year after my father left, it was political, and eventually we were released on 2 June 1958. After leaving Poland we were reunited with my father in Germany.

Once in West Germany I went to a special school for students who had once spoken German, but had forgotten the language. Under Communism, we learnt Polish and Russian, German was not allowed. I had to relearn my own language, it took only a year and I was their best student. I was dux of the school and won a prize of 200 marks.

After school, I chose to become an electrician and took some work with a company. At evening school I learnt English and continued to learn German, the technical training was a separate class.

The first three days I was terribly seasick even though I was the son of a sailor.

When I had finished training I wanted to get out of Europe, I decided I needed a bit of adventure! It was hard leaving my family behind, but I wanted to see new places and leave Europe behind. I travelled on the SS Flavia and we left from Bremerhaven in Germany. The first three days I was terribly seasick even though I was the son of a sailor. After that it was like paradise – I enjoyed every minute and got to know a lot of people. We went to London; we passed the Galapagos Islands, visited Tahiti, New Zealand and arrived in Melbourne on 20 March 1965. 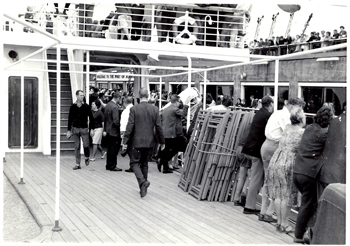 I remember I was walking on a plank leaving the SS Flavia and two other men were going onto the ship, returning to Europe. They said, “this country is only good for one thing – to make money and get out.” I really got a shock and wondered what was in store for me.

They put us on a train and we went to Bonegilla. I don’t remember much of those first few days except the employment office. The employment officer said, “where would you like to go?” I mentioned Cairns. He said, “they don’t need any electricians up there, how about Woomera?” I said yes because being an electrician I was quite excited, I was told it was a rocket range.

… the door opened and a guy walked in. I guessed immediately, by his accent, he was Dutch and started playing Tulips from Amsterdam.

At Woomera we worked 14 hours per day; it was tough, it was hot, but also freezing in the morning because it was desert. I stayed with a Russian in our hut; he had exactly the same piano accordion as I had at home in Germany. He asked if I could play a little in the camp pub. Next day we took the squeezebox into the pub and I started to play a bit. Nobody was interested at first, then the door opened and a guy walked in. I guessed immediately, by his accent, he was Dutch and started playing Tulips from Amsterdam. He broke down, he was crying. Then, he took a hat and put 10 shillings in it and then everyone was coming up to me: Can you play this? Can you play that? 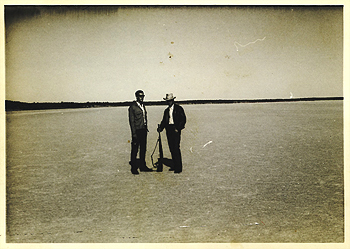 Our family has a love of music; it comes from my father’s side. My father played the accordion and so did my grandfather, three generations. During the Second World War everything was smashed, but Communism was harder. Music was for happier times; when I young at the age of five or six I remember hearing a lot of music, but when we were living in Communist Poland there was very little.

My boss was very hard, I found out he had an arrangement where he would receive immigrants who could not speak English very well. They were basically trapped over there, at Woomera. Luckily I could speak reasonable English, I knew my work was good but did not want to stay. Other workers were not happy either.

On the day I got my licence, I quit. Two other workers asked if they could come with me…

At the time, I was studying to get my car licence. I could only get one answer wrong [so] I studied every night. On the day I got my licence, I quit. Two other workers asked if they could come with me; all three of us left that day.

Shortly after that I was travelling through Khancoban, amongst the foothills of the Snowy Mountains. I visited the employment office and asked for work. The next morning I started work on the Snowy River scheme.

My job as an electrician on the Snowy River scheme was to work on the transformers. I had to wire the star connection and put an aluminium screen around it. I worked there for one year, the pay was good but a lot of the men felt cooped up. There was a lot of gambling at the Khancoban pub.

This was how I meet Ingrid. When she opened her front door I was ‘gone’. Basically I fell instantaneously in love…

A friend asked me to come down to a dance in Wodonga. I said to my friend that I wouldn’t know anyone [and] he said he would introduce me to a beautiful woman. I said, OK I’m coming then! This was how I meet Ingrid. When she opened her front door I was ‘gone’. Basically I fell instantaneously in love; it hit me like a hammer!

I bought an old car and travelled back and forth from Khancoban to Wodonga to see Ingrid whenever I got the chance, up and down, up and down. Sometimes after work, I would say I’ve had it today and simply drive past my hut and continue to see Ingrid.

… the following year Ingrid was pregnant again and she did not want to have our second child in Germany, there were fears that Communism would invade…

Ingrid and I married and I moved to Wodonga to live with her. Soon Ingrid was pregnant with our first child. We packed everything up, sold all our possessions and decided to return to Germany for a few years, we lasted only two. We had our first child, Stefan, in Germany and in the following year Ingrid was pregnant again and she did not want to have our second child in Germany, there were fears that Communism would invade. William was born in Australia.

We arrived back in 1969, the day before Christmas. Initially we lived with Ingrid’s parents while I had a temporary job. I had several temporary jobs at Bandiana Army base, on the outskirts of Albury Wodonga, in the kitchen and as a waiter. Then I put in an application to be an electrician at Bandiana, I was accepted. After one year I became permanent and then stayed at Bandiana for 28 years.

We often received cassette tapes from my parents in Germany, sometimes my brother and sister would talk too. They contained words and music – instead of writing a letter we sent tapes. It was wonderful hearing the voices of my parents. My father was a bit like a disc jockey; he would talk a little then put on some music. As time and technology progressed we did not need to use cassette tapes any more, we could talk easily on the telephone.

Three generations of my family have played the accordion: me, my father and grandfather. My two boys were taught the piano and they too have this love of music…

Ingrid and I are still together, our children have grown up now and married, and occasionally I open up the wardrobe and dust off the accordion. My father sent over my accordion after immigrating. It reminds me of my father and our family’s love of music. Three generations of my family have played the accordion: me, my father and grandfather. My two boys were taught the piano and they too have this love of music, which I hope will follow onto my grandchildren.

cassette tapes
“I often received cassette tapes from my parents in Germany, sometimes my brother and sister would talk too. The tapes contained words and music. It was wonderful hearing their voices, you felt closer somehow.”

piano accordian
“Our family has a love of music; it comes from my father’s side. Three generations have played the accordion: me, my father and grandfather. My father sent over my accordion after immigrating.”