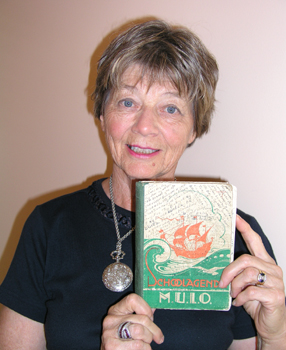 Bonegilla for 3 weeks, then 4 years

My story begins in Holland, where I was born in 1935. I had a relatively quiet first few years of my life and then World War Two began. I remember the first few days of the war and running through the streets for shelter. The Germans arrived and war set in. Life just continued, war became a way of life, after a while you just didn’t worry about it; mines exploding, planes bombing overhead. At school, when the sirens would go, we were told to sit under our desks.

It was called ‘The Venice of the North Sea’; people from all over the world would come there for summer…

My home town Scheveningen was a seaside resort and fishing village. It was called ‘The Venice of the North Sea’; people from all over the world would come there for summer. Scheveningen was evacuated because the Germans needed to occupy it in case the English invaded via the coast. We were moved to Delft, where we lived close by a military airfield. Dad worked for the community kitchen. This was good as it gave us an extra ration for the family.

Dad was nearly taken twice during the Razzia, (police or army raid) when the Germans would come knocking door-to-door. He went to work and was captured by the Germans and taken to the railway station. He saw his chance and jumped in front of a slow-moving train and hid at his work under the benches.

There was an air raid attack and they attacked our little dingy, somebody grabbed me…

During our time in Delft, wartime became a way of life. Rotterdam was bombed and there were many families homeless. We took in a family walking from Rotterdam to Delft, they had lost everything. I went to The Hague for piano lessons, coming back in a dingy. There was an air raid attack and they attacked our little dingy, somebody grabbed me, threw me on the floor of the boat and when we got to the bank, threw me on it. Well you dusted yourself off and went home!

We were lucky enough after the war to go back to Scheveningen, my lovely Scheveningen. I loved returning home and being close to the beach. I rode my bike to high school and loved going there. We had homework every day of the week in different subjects and languages so the school gave us a diary. Here, I learnt English at the Professor Gunning School at The Hague. My school diary lists all the languages which would later help me work in Australia.

…I saw the light sequence, I could hear the music from the carousel and that’s when I knew I was leaving.

Around June 1952 I was finishing my final exams at school. Mum and Dad said they were thinking of migrating because they wanted to leave the memories of war behind, and would I mind? I said no because I was young and ready for new adventures. As the ship was pulling out from Amsterdam in early August 1952 the last thing I saw of my hometown was the boulevard and the lighthouse – that’s when it hit me. Because I could see the sequence of the light house at home on my bedroom wall, I saw the light sequence, I could hear the music from the carousel and that’s when I knew I was leaving.

…so many young people on board and there was dancing, games, chess, draughts, swimming…

Sixteen years old, I was going on the Johan Van Oldenbarnevedlt, the “Queen Mary” of the migrant ships. My brother and sister were younger, so they had to be downstairs in the crèche. I could be on deck – I had freedom. There were so many young people on board and there was dancing, games, chess, draughts, swimming for five weeks.

Our first [Australian] landing was in Fremantle, Mum and I went for a walk and a couple of local ladies yelled over a fence, “g’day, lovely day today.” I just nodded politely and walked on. Mum said, “what did they say”? I didn’t really know but said it was something about how lovely it is to die. Of course, it was the Australian vernacular.

…no heating of any sort and the beds were soldiers’ beds, chicken wire beds with black blankets…

Melbourne on Sunday 14 September in 1952 – it was like a ghost town. It was dull, dark, it was a sombre day. It took seven and a half hours from Melbourne to Bonegilla by train and we arrived in the pitch dark. The buses took us to the big reception centre and we were allocated our two little rooms, which were as sparse as sparse could be. Naked little light bulb, no heating of any sort and the beds were soldiers’ beds, chicken wire beds with black blankets and our luggage had not yet arrived.

We went to bed with Mum and Dad and my young sister, Mary, in one room, with my brother and myself in the other. Every time we moved the beds squeaked, I could hear my parents giggle and laugh. And then we were all laughing and giggling every time the beds squeaked. That night at Bonegilla, a lot of people cried, arriving there the way we did, but we actually laughed – I think that probably was a good sign about us adapting to the way of life in Australia.

After about three weeks I was asked if I wanted a job. I said to Mum if it’s no good I’II come back and so she said OK. I was engaged to work in a hotel. As I mentioned, Scheveningen was a seaside resort with hotels. Well I arrived at Jindera, just outside of Albury, by taxi for my first job and couldn’t see the hotel. The driver said, “It’s not that side love, it’s the other side”. I said, “Oh my god – do you call that a hotel?”. “Yep”, he said “the Jindera Pub!”

My family soon followed me to Jindera where Dad secured a job and Mum had another baby, Jeanette in 1954. Mum had seen an advertisement in Albury-Wodonga’s Border Morning Mail, wanting a ‘New Australian’ woman with knowledge of languages. Mum said to apply and we found out the job was at Bonegilla. So, I went back there from Jindera. I worked in the x-ray department, where they x-rayed chests to see if there was any TB (tuberculosis). That was a busy job, because there were hundreds of people, but eventually it slowed down and I was transferred to the hospital. I ended up in the front reception office, translating for people who inquired after their family members.

…just a small hall with a continental band. I had seen this quite dashing Italian chap there.

I had all sorts of friends in all different nationalities with their different foods and language. We had some lovely balls at Bonegilla, soccer teams played, we went swimming in the weir. I used to go to the Continental dances, near the water tower in Wodonga, just a small hall with a continental band. I had seen this quite dashing Italian chap there. He always came with a girl, however he always asked me to dance, I thought I might get my eyes scratched out. I found out the girl was his sister and he asked me out. That’s where our romance started. We fell in love, and in due course after three years we were married.

My husband’s family had a concrete business; my husband worked in it. We made our own house, every single brick, when everyone else was going to the soccer or the weir on the weekend. By the time we married the house was well under construction. We moved in when my first child, Robert, was nine months old. Business was good, the family did a lot of building of the dairies, tiling and terrazzo. Well the Tremontis, my name had changed to Tremonti by then, were very busy. We had another little boy, Mark.

On 30 November 1963 we had to go voting and found out there was a place called Mannus were we could vote. We were all laughing about the fact that Mannus was this tiny little place with only the post office. I remember my husband picked a rose from the garden and gave it to me as we got back into the ute.

We were all in the front of the ute, my husband, my two children and my brother-in-law, as you could do in those days. We rounded a bend and were met by a 10 tonne lorry which just mowed us down.

I thought I must have been unconscious, but when I could gather my thoughts, I saw what was left of the ute and both men were dead. It didn’t really mean anything – sometimes you don’t realise at the time how bad things are.

After my husband died Mary lived with me and the boys until 1965, then Jeanette lived with us from 1965 to 1971 while she attended Albury High School – Mum and Dad had left Albury. Luckily my two children walked away unscathed or so we thought. That was a terrible time – it was revealed that Robert had been severely injured; his stomach had been injured on his spine. That went on for six years, he was operated on initially in Albury and later in Melbourne after he collapsed in the street. After Robert recovered that’s when life began.

I worked at the Border Mail and then at North Albury High School. Every job I applied for I got – which was very nice. I took up horse riding, mentally and physically that was important. My friends kept inviting me out and I met Keith as my partner on a blind date.

Can you imagine meeting your cousins and aunts for the first time in 43 years? It was a great time.

He was a very stubborn man, and would not take no for an answer. Three years later we married. Together we bought some acres at the Jindera Gap, and created a home, a garden and started a transport business there. Life was very busy and very good. When we finally passed on the business, Keith and I travelled. I returned to Holland after 43 years. Can you imagine meeting your cousins and aunts for the first time in 43 years? It was a great time. I was very upset when we left again, but I didn’t want to live there. Keith said we’ll return and we did in 2000.

handwritten school diary
“I loved going to high school in Holland. We had homework every day so the school gave a diary. It lists all the languages I learned which would later help me find work in Australia.”

Anne Hawker nee Verloop, Bonegilla Reception and Training Centre, early 1950s
“This is me at 17 years old, wearing my nurse’s uniform, sitting on the steps of my accommodation at the Bonegilla hospital.”