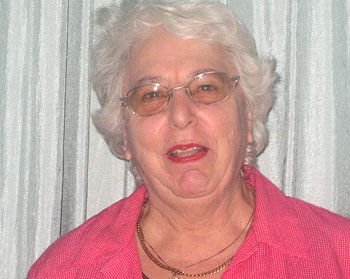 Things in England looked pretty grim after the [Second World] war and my father felt there would be a far better life for us in Australia. We had reports from friends already in Sydney. One of the comments I remember was that Sydney houses have different coloured roofs unlike the usual English red roofs.

In 1951, after my grandmother passed away, my father told my sister and I that our family would be migrating to Australia later in the year. He was an accountant and told us he’d already been studying for Australian qualifications. He was a reticent man who didn’t talk much to us about his plans and feelings. Maybe he wanted a new future; I suspect he hoped to prove himself in another country. I was 14; my sister, Yvonne, 11. We were both extremely upset about leaving our friends.

The leather satchel in the photo, well worn, was pretty standard. It was a birthday present from my grandmother when I started high school.

In those days, at the age of 11, you sat for a scholarship for entry to high school and were allocated a school in the area. This photo is from Wanstead County High School, Essex in July 1949. It was very progressive, for instance, co-educational and a choice of summer uniforms from several styles in many colours of checked gingham. The leather satchel in the photo, well worn, was pretty standard. It was a birthday present from my grandmother when I started high school. It has my initials “SK” engraved in black sandstock. 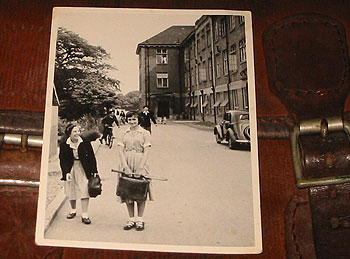 Our extended family was very close. One of the last events I remember before leaving England was a Passover seder 1. Everybody in the family signed my Haggadah 2, which had been given to me by my parents in 1946. You can see the many wine stains on different pages. I still use it and each year there is another wine stain.

I remember a relation yelling out, “at least they’re not being deported as convicts.”

A professional photographer came to a farewell party and took family photos. I remember a relation yelling out, “at least they’re not being deported as convicts.” I was still not happy about leaving. I remember crying on many occasions and when I said goodbye to one school friend, she became quite hysterical.

We weren’t one of the “Ten Pound Poms”. Under a Government scheme, with a bond to stay in Australia for two years, [British] adults paid just ten pounds and children’s fares were free. My father refused to go on this long waiting list. When the time came, he paid all our fares in full and we had to sell our home and furniture to finance the journey.

My father’s parents were absolutely devastated about our plans and wouldn’t come to the boat-train to say goodbye.

My father’s parents were absolutely devastated about our plans and wouldn’t come to the boat-train to say goodbye. I still have the telegram they sent to the boat wishing us well. In those days, if you migrated, people did not expect to see you again.

Before we left, we went sightseeing and shopping. Many London streets and buildings had been damaged or barricaded up during the war so we hadn’t seen much. We visited the newly repaired Madame Tussauds [waxworks museum], the Tower of London and the Festival of Britain, and sailed down the River Thames to Hampton Court Palace. We bought clothes for Australia including heavy winter coats and raincoats. My grandfather made my father a very heavy black winter coat. Sadly, these winter clothes were seldom used in Sydney.

We left from Victoria Station [in London] on a boat-train to Tilbury Docks. On the boat I made friends with a little Italian boy, and we’d go off exploring on our own. My parents couldn’t understand being friendly with someone who couldn’t speak much English but we had fun together. We found the entrance into first class – we were second class passengers – and wandered around. We weren’t dressed correctly for first class so gave up before we were caught.

I remember when we passed over the equator. We celebrated with an inflatable King Neptune climbing aboard and leading the games and fun. Many of us were dunked in the swimming pool.

The ship took three and a half weeks to reach Australia. When we docked at Pyrmont [Sydney], there was a big welcoming band playing. We all wore our best clothes as we walked down the gangplank. My sister and I wore our gloves; my mother had her hat (she always wore a hat). And my father wore a trilby hat with his new suit.

An old friend from England, Ida, was at the dock and drove us to temporary accommodation which she had arranged. It was a huge old house in Vaucluse converted into a guesthouse. You walked in and there was a magnificent cathedral ceiling. I’d never seen anything like it. The place was far too expensive for a long stay and very soon we moved into the Bondi Pacific Hotel overlooking Bondi Beach. The rooms were full of cockroaches with even more cockroaches along the streets. The hotel was opposite a tram cutting so we had constant noisy rattling trams racing outside.

By the time we organised our schools it was early November, an awkward time, just three weeks before exams. My new school, Sydney High [at Moore Park], was a terrible culture shock. I was a year ahead in some subjects and the syllabus was entirely different in others. My school in England had a much higher standard of teaching and student involvement. I’d always been used to large playing fields, a swimming pool and quality training; [I was] now limited to sports in a ‘girlish’ atmosphere.

The heavy uniform in hot weather was uncomfortable with strict attention given to the length, also thick brown stockings and lace-up shoes. I remember some of the teachers were narrow-minded and discriminatory if you weren’t Australian. Science really bothered me as you weren’t allowed to do any practical work. I could not use my satchel as everyone had Globite 3 cases packed with too many books, which had to be carried back and forth each day.

For me the tight discipline was archaic. The boys’ school was adjoining, but you weren’t allowed to speak to them.

For me the tight discipline was archaic. The boys’ school was adjoining, but you weren’t allowed to speak to them. Between the two schools was a boundary known as “the bear pit”. The boys were allowed up to the boundary but girls were not allowed anywhere near it. On the double-decker school buses girls had to sit upstairs and boys downstairs. There was plenty of yahooing even though we were separated.

I was 15 when I left school. My father said girls eventually got married so what did I need an education for anyway? I learnt shorthand and typing at a Commonwealth Government college. We were paid three pounds a week to attend and were guaranteed a job in the public service.

My family struggled in the beginning but slowly found their feet. My parents were very proud and liked to give a good impression. We found a flat in Bellevue Hill with the one thing that my mother always insisted upon – a separate dining room. We moved in with little furniture. My father had a job and my mother was involved in community services.

I became friendly with many young Europeans and was attracted to Habonim, a Jewish youth movement.

I became friendly with many young Europeans and was attracted to Habonim 4, a Jewish youth movement. I had a strong empathy with them and made many friends. I remember becoming aware of what happened to European Jewry during the war. We enjoyed outdoor camping with lots of discussions, singing and hiking. As no one had a car, we walked everywhere, even home from the city or across the Harbour Bridge.

My parents preferred I socialise with English people and have English friends. They’d check up on me every weekend. Where are you going? Why aren’t you going to this house party? Why are you going here? They became quite upset about my new friendships which caused problems between us. My family had an English lifestyle that was quite different to Australia and Europe. It took quite a while before my parents allowed us to walk barefoot (considered bad manners) around the flat.

My husband Sam is eight years older than me and also had enjoyed Habonim. Our first date was horse riding in Centennial Park. We talked a lot. In fact we talked so much that we didn’t go horse riding and found we were locked in the park after closing time. We had to go to Paddington police station and ask the police to unlock the gates to let his car out.

Sam’s parents came from Palestine. His mother spoke fractured English. I remember how difficult it was for my parents to describe Sam and his family when writing to relatives overseas. And then Sam showed them this little old terrace house (our first home) in Bondi which he was renovating. One room had a termite nest in the middle of the floor. My father took one look at it and said, ‘no daughter of mine is going to ever live in a house like that!’

My parents made all decisions for the wedding except, one; without advice from anyone we chose and bought a wedding ring and, two; colluding with the dressmaker, I organised my own dress which nobody was allowed to see. It had a lot of beading and a fashionable big hoop under the full flared skirts. I hired the hoop and didn’t quite get around to returning it – it still lies under my bed!

Footnotes
1. This is a traditional meal held each year (around Easter time) remembering and telling the story of the exodus of Jews from Egypt.

2. The name of the book which tells the story of the exodus.

4. Habonim is aligned with the kibbutz movement.

Haggadah – jewish book of passover story
“My parents gave this Haggadah to me in 1946. Everybody in the family signed it at the ritual passover meal. It continues to be used each year – indicated by the many wine stains.”

wedding hoop
“This hoop was worn under my wedding dress. It fitted me then a whole lot easier! It still lies under my bed.”

leather satchel
“It was a birthday present from my grandmother when I started high school [in England but] I could not use it [in Australia].”

telegram
“This was sent by my father’s parents when we were leaving England for Australia. They were too upset to come to the boat-train to say goodbye.”

leather gloves
“My grandmother gave me these gloves of leather and astrakhan (curly lamb’s wool). They’re very warm and I wore them daily in England but seldom in Australia.”