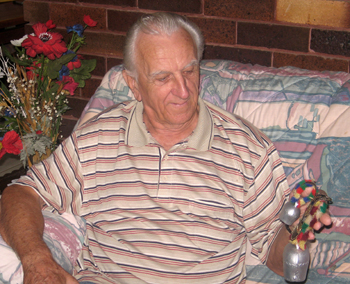 Bonegilla for about four weeks. Emmco company accommodation in Orange for two and a half weeks.

I was born on 27 June 1931 in the town of Hohenfurth, about 30 kilometres north of Lintz on the [River] Danube, which was then in Czechoslovakia. My parents moved to Budweis after I was born and then it became precarious, there was tension. In my first year at school, the Czechs, because I was German, threw ink over me and my father said, “You’d better go, move out to Hohenfurth”. My home was very hilly, where the Bohemian forest starts and it gets very cold in winter – minus 36 degrees [centigrade].

Then Hitler came to power and annexed Sudetenland to Austria and Germany. I saw fighting; the Friekorps formed by the Germans and Austrians fought the Czechs who retreated and the Germans took over. My father was called up to the Czech army but deserted and went to Austria. Now we lived in Hohenfurth because they were all Germans there but I think we were more Austrian than German. So my father was called up into the German army and went into France and then Russia.

I was in that school for three and a half years. The purpose was to select [future] Nazi leaders, party officials and SS officers…

After two years at high school, I was selected as one of the best students and sent to a district selection camp, under the Nazis already. From about 80 they selected 7 and another 14 from other schools and we went to Secau, it used to be a convent. We had SS instructors and I was in that school for three and a half years. The purpose was to select [future] Nazi leaders, party officials and SS officers and of course we were proud of it. I expressed my desire to become a doctor and I swear to God that we never knew the atrocities committed in the concentration camps. Some of us were selected during bombing raids to go up onto roofs and watch for planes and sound the alarm and to help if anything happened.

The training and punishment was very hard. If you did something wrong, they put a rifle on your arms and you stand there and fall over. Or they marched you around with your hands up in the air; walked around like that for an hour. Shoes had to be perfectly polished. The part between the heel and the sole had to be polished also and we had hobnailed boots and they could have no rust on them whatsoever, so we had to get emery paper and clean the nails on the soles.

… a list of people to be arrested for the concentration camps. And my mother’s name was on it!

Three and a half months before the war finished, my father went missing in Russia and the Russians came closer. When my father went missing my mother asked for me and they let me go home. When I went home the Americans came. We had a town mayor and they went through his office and found a list of people to be arrested for the concentration camps. And my mother’s name was on it! The reason for that was she had taken me out of the school. An older boy started to talk to me about the concentration camps. I said, “You’re stupid, that’s not right.” Then when everything came to light I said to myself, “Oh Jesus, why did I get into it?” I don’t think the camp [school] did me any harm, although it was child abuse really.

The Americans took over the Mayor’s house and I worked for them. I spoke English, washed dishes, helped light the stove – that sort of thing. And they were exchanging eggs, butter, milk and stuff like that. But when the Americans left, the Czechs took over and they gave us a week to get ready. We were deported in cattle trucks, a bundle of straw in each corner, half a 44 gallon drum for a toilet and curtains you could hold for privacy.

I was on the farm for about one and a half years in one room [with] my grandmother, mother, two sisters and myself.

My father never came back from Russia. So we went to Kaichen [in Germany] and they picked the ones who could work on a farm. That was ethnic cleansing because the Czechs wanted that land. Two and a half million people had to go out and the Allies didn’t do anything. I was on the farm for about one and a half years in one room [with] my grandmother, mother, two sisters and myself. I started my apprenticeship there, a workshop fitter. So I did my exams and I passed, and, during my apprenticeship I did a preliminary course for polytechnical or engineering school. They gave me a free stipendium (bursary) and I could have studied for nothing. But I couldn’t take it on because I didn’t have money to buy books or anything. So with no income I went on working. And then I got sick of it because, oh, I was still talking to Americans and I thought I’d love to go to America. But I needed a guarantor and I didn’t have anyone. I tried Canada, but they told me I was too young.

And then there was Australia on the map. I knew it was there and that it had kangaroos. But I had to submit myself to work for two years [which was] okay. I left on 14 November 1953 and got to Melbourne on 23 December. We picked up 1,000 Greeks in Piraeus and Athens, then sailed straight across to Fremantle. We were on the ship for about five weeks. From Melbourne we went to Bonegilla migrant camp. When we got to Bonegilla they dished us up a steak about this big (Hans spreads his arms wide open). I had never eaten so much meat in my life – the size of the steak, it was unbelievable. But honestly, I thought it was primitive. It was hot; hooley dooley, it was hot. But we were lucky, the Hume Weir was there, a big lake.

[I] heard about the Snowy Mountains scheme, so I went. It was [at] Munyang, up in the hills. When I said I am German, the foreman said he didn’t have a job.

Well, everything stopped at [Christmas] time in Australia, everything. Everyone was on holidays ’til the middle of January and then they sent me to Orange, to work in my trade to Emmco – refrigerators and stuff. I worked for two and a half weeks there and had enough money and heard about the Snowy Mountains scheme, so I went. It was [at] Munyang, up in the hills. When I said I am German, the foreman said he didn’t have a job. Another chap, a Hungarian or something, said I shouldn’t have said I was German. So I went back to the foreman and after arguing with him that he should give me a week and if I wasn’t good enough, then I would go. Well I was right after that. I worked for Selmar Engineering. When that finished, Selma Canberra, then Malcolm Moore near Cooma. I became superintendent with about 40 people under me. The thing that stuck out, up in the Snowy, was that there were Russians, Italians, Englishmen, Yugoslavs, Germans, all nationalities, and it was only eight years after the war and we all had fun together. The people are alright; it’s the politicians, that’s the problem.

…it was ten years before I could get back. It was hard to have left my mother. She took it pretty hard.

We’ve been back [to Europe] four times now, I think. I did send money back to [my family], quite a bit, and then it was ten years before I could get back. It was hard to have left my mother. She took it pretty hard. There’s these things from my mother – see, those little cow bells hanging on that little tray? She bought them on a holiday in Austria and following her death in 1980 my sister, Johanna, sent them to me as a keepsake. I look at them and remember her, you know.

I married Rita in Richmond, [Sydney] in 1956. We had our golden wedding anniversary last August. Back then it was Rita’s decision to go to Coolangatta for our honeymoon. Her father had a garage on the corner of Golf Club Road; Fenwick was his name. I worked there for a while, started an engineering business, but then I got another job. I have never regretted it. We lived in Coolangatta for a few years but came back to Tweed Heads. It’s a very peaceful beautiful country you know, and we have a million dollar view out there.

I don’t have a big connection to Germany, that’s why I migrated. I had to make a better life somewhere else. I couldn’t go back home, so I went here. I’m glad I did…

I have worked on my own as an engineer since 1976 and worked with Sand Mining Industries, Sea World, Currumbin Engineering, other places in Queensland and overseas: the USA, Egypt, Thailand, Hungary. I even did some work for the Royal Australian Navy contractors. But I am semi-retired, 75 years old, enjoying our three children, two girls and a boy, and our grandchildren. I was naturalised in Cooma on 4 August 1958 and married an Australian. I don’t have a big connection to Germany, that’s why I migrated. I had to make a better life somewhere else. I couldn’t go back home, so I went here. I’m glad I did, very glad.

miniature cow bells
“It was hard to have left my mother. She took it pretty hard. There’s these things from my mother – these little bells. I look at them and remember her.”

Johann (Hans) Kaiser with miniature cow bells
“It was hard to have left my mother. She took it pretty hard. There’s these things from my mother – these little bells. I look at them and remember her.”