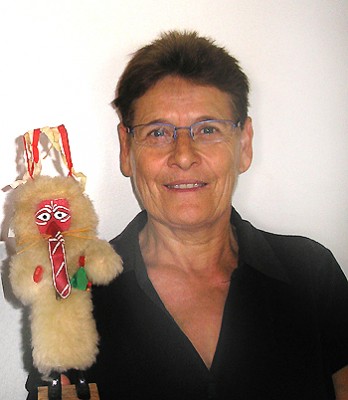 Our banana plantation at Dungay.

I am Julie Mesic. I was born Julka Drazenovic in a small village called Kriz Polje in Lika, Croatia. I was the youngest in a family of eight; four brothers and three sisters. I went to school in Kriz Polje and finished when I was 15. Then I stayed at home and helped my sisters; we were farmers. And that’s where I lived until I was about 19. That’s when I met Mick and came out here. He came home [to Croatia] in 1966 for a six month holiday [from Australia]. We met at my sister’s place. We knew each other for a couple of weeks, got engaged and a few months later got married. Being the youngest one, the family were quite happy. They thought there was a better life for me here than over there, which turned out to be true. We waited for my papers to be done and we travelled back on a ship and drove all the way from Brisbane [to the Tweed Valley in northern NSW] about 17 February 1967.

…it was very strange and for the life of me I couldn’t figure out what the bananas looked like. Everyone was talking about bananas and I keep saying, “What the hell are they?”

It looked so beautiful all round in the Tweed Valley, all the sugarcane. The only thing was the population wasn’t so big as it is now, only about 7,500 [people]. But it was absolutely beautiful. We were living at Dungay [on Mick's farm] for quite a few years. But I could say it was very strange and for the life of me I couldn’t figure out what the bananas looked like. Everyone was talking about bananas and I keep saying, “What the hell are they?” So the first time I said to [Mick], “What’s the bananas?” He said, “Well I’ve got some at home”. So when I got here and looked at those huge stools (bunches) I just said, “Oh, my God!”

After that we went into bananas for quite a few years. We worked seven days a week, side by side, with the children. Used to take them with us, put the big tarp underneath the stools with the toys and stuff. Left them playing and we were doing whatever had to be done.

Australian people, they tried to help – steer you right and correct you if you say something wrong. That made all the difference…

Really, I wasn’t bored, I was so busy. But the language, yes, it was a bit hard with that. It probably took me about 12 months to start picking up the language because I was very shy, kept to myself. But the elder ones, mostly the Australian people, they tried to help – steer you right and correct you if you say something wrong. That made all the difference and I used to listen to the wireless and television and just learn by myself, what I could. Oh, the first couple of years of living here, if Mick had said to me, “Here’s a ticket, you want to go and visit your family?”, I probably would have gone and stayed there! I wouldn’t have come back. But after that, no way, I’m an Aussie!

When I came here I left most of my things at home in Croatia. But over the years I have got some photos from Mum and Dad. Every now and again I’ll go into the hall and I’ve got a box of photos sitting there. I just look at them and in one way I’m sad because you sort of have lost touch with the people. But then I stop and think I never had anything there and I wouldn’t have anything there if I didn’t come here. We’ve bought some things when we’ve visited family back in Croatia, like this traditional St Nicholas figurine.

My whole family still lives in Croatia. My parents passed away but I still have my sisters and brothers there and … I would love to go, whenever I can, to visit…

I have two daughters and a son. All three of them are well educated. We don’t have any relatives here – only Mick and me. My whole family still lives in Croatia. My parents passed away but I still have my sisters and brothers there and while they are alive I would love to go, whenever I can, to visit them. But I wouldn’t adjust to live over there again. I would love to see some younger ones coming here, definitely. So I’m not sorry I left, I’m quite happy here. I got my citizenship in Murwillumbah in April 1974.