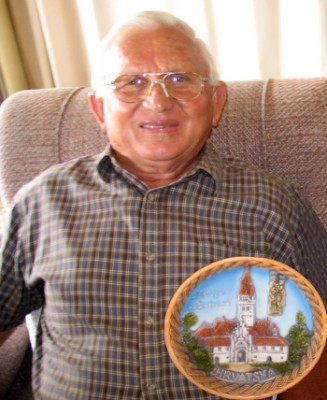 I was born in the village of Nova Kapela, Croatia, in 1935. My father, Jurojand, was a blacksmith doing wheat harvesting work. He could fix anything. My mother’s name was Maria. I have four sisters and a brother and they all live in Croatia still. I started school when I was eight years old and that happened during the Second World War. At one stage our school was occupied by German soldiers and, more or less for 12 months, we couldn’t go to school at all and we had to go into the orchard, sit on the ground and learn from there.

…with three other young people, we decided to go away. We fled from Croatia with nothing to Slovenia, to Austria.

I was working in a steel factory – maintenance man helping get the factory built in the mid-50s. One day, with three other young people, we decided to go away. We fled from Croatia with nothing to Slovenia, to Austria. That’s where we stayed for three months until my papers were processed to come to Australia. My father was very, very upset, writing for me to come back. But I couldn’t see myself doing that. I thought I would have let these other three people down but also because I was a bit adventurous I wanted to go and I couldn’t see myself going back. I had a distant uncle here [in northern NSW] and I got in touch with him, told him what I did and he said, “Oh well, why don’t you come and live here in Murwillumbah”, which I did. His name was Milan Tarten. He had a banana farm where his wife and son still live, but he has died since. But that was the reason I came.

When we left Croatia we travelled from Austria to Genoa in Italy, and boarded an old ship called Roma. Took 28 days to come to Fremantle, then Melbourne; it was Christmas [Day]. I was desperate to get to Sydney to my Uncle Milan. He picked me up in Sydney and we flew to Coolangatta [on Queensland's Gold Coast]. Never cost me a cent. All paid for by the Australian Government.

There were Greeks and Macedonians when I arrived here first and I used to go up to their parties, sometimes, and dances and all that. But there wasn’t too many Croatians.

The climate was beautiful, you know, especially Christmas time on the Tweed [Valley]. It was hot and warm, no need for warmer coat and stuff like that. I lived with Uncle Milan for a little while, because, you can imagine, I didn’t know the language very much. There were Greeks and Macedonians when I arrived here first and I used to go up to their parties, sometimes, and dances and all that. But there wasn’t too many Croatians. Mostly, as I said, Greeks and Macedonians, and Serbians and Slovenians.

My real name was Milan and, when I arrived here, my uncle had the same name -Milan. And there was a certain gentleman, he used to work in the employment office those days, and he said, “We can’t have two Milans! One has got to be ‘Mick’”. So it stuck with me and I finished up wearing the name Mick, even right up to now.

Where I learned my language, mostly, was from the older people. They were more patient. The younger people, they are always on the go…

Language was the biggest problem. You couldn’t communicate with the young people. Where I learned my language, mostly, was from the older people. They were more patient. The younger people, they are always on the go, and didn’t help you very much. But the older people, they always wanted to listen to you – to your troubles and you know, they always wanted to help you with your language and stuff like that. I got introduced into bowls. In those days it was mostly older people playing; it’s not like nowadays. But that’s how, mostly, I learned my language and skill of the bowls.

I found a job; it wasn’t the proper job I was looking for, but, at that time, that’s all I could handle because the language barrier and all that. I done one year cane cutting and when the Doon Doon Dam was built, I worked over there for over two years because I didn’t have the banana [plantation] yet. I worked for a fellow at Terranora in the tomatoes for two years and seven months, went grape picking for two seasons. I leased some land off Uncle Milan and I started to grow bananas for myself. If you worked for yourself in bananas you didn’t have to be a Rhodes Scholar to do that type of job.

Julie [my wife] and I didn’t have much education. My parents couldn’t afford to send us to a high school and they just couldn’t see that way, but when I came here I made sure all our children were going be better off and well educated, better than we were.

…I watched a program that showed the village where I was born and the church where I used to go when I was young person and it made me feel good when I saw that old building.

I watch the news in Croatian language. My children gave me a [satellite] dish for my 70th birthday. But it’s almost 50 years; I have just forgotten a lot of language from where I was born, so that’s why I like to listen to the news. At one time I watched a program that showed the village where I was born and the church where I used to go when I was young person and it made me feel good when I saw that old building. I had seen it when I was back on holidays. These three plates show scenes of Croatia. We got these when we visited in 1983. One has special significance – the old church of Marija Bistrica. It’s the site of legendary appearance of the Virgin Mary and people make annual pilgrimages to it.

I miss home sometimes. I always cherish my brother and sisters. I like to ring up my brother and sisters and am always asking, “Is there anything in the news that I should know?”, and they say, “Oh, you wouldn’t know all these people and there’s not much going on”. If I had no relatives over there it wouldn’t worry me. I’d rather go and see the parts of Australia I didn’t see. I was naturalised in 1963, here in Murwillumbah.

commemorative wall plates
“These three plates show scenes of Croatia. We got these when we visited in 1983.”