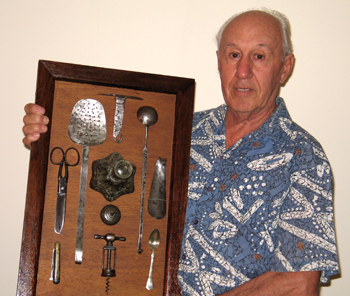 Bremerhaven, Germany in May 1951

Lithgow railway; land clearing on farms near Nimbin and Kyogle, northern NSW; General Motors and Dunlop in Melbourne; banana farming and sand mining in the Tweed.

My name is Anton (Tony) Potocnik. I was born in 1930 in the village of Orehovica, Slovenia, where I spent my childhood. Things were tough in Slovenia in those days. We didn’t have much money, the Depression was on and my schooling was basic. My father was Anton Potocnik and my mother was Marija (nee Bozic). We had always been under some occupation – goes back to Roman days. When the Communists took over following World War Two, there was still no food and the promises they made didn’t happen.

…I ran away. I saw what they did to recruits. They treated them like dogs, it was unbelievable.

I started work when I was 17 for something like the Roads and Traffic Authority and worked on the railway in Bosnia for two months. They called it ‘free work’, but it wasn’t free. You had to do it, for no money, for nothing. About three weeks before I was to serve in the army I ran away. I saw what they did to recruits. They treated them like dogs, it was unbelievable. But nobody wants to leave their home really, if you don’t have to. So it was very hard to leave my mother and four sisters and I had to do that without telling anyone, because when you escape from a place like I did, from a Communist regime, you couldn’t afford to tell anyone. If I was to tell my mother that I intended to escape they would have locked her up because she knew about it. The government took all I left behind; a few clothes, a few tools and a few things like that. To run away was the only chance I had, for they would have put me in the army.

So I came home from work on Saturday night and stayed at home all day Sunday. That evening I took my bike and walked out of the yard. My mother asked me what I wanted for Monday’s lunch, so I told her not to worry about it. She thought I was going to pick some fruit. All I took was an empty bag and rode away to the border. If you succeeded you were lucky, if not, you weren’t. I got past alright, I was very, very careful but a lot of others lost their lives, a lot of them got shot.

I wrote to my mother many times, even from Australia, but she didn’t get the letters…

I surrendered to the local police and all us single men were put into an empty goal in Trieste, under British and American control. I spent about two weeks in the first camp and went to another for roughly two months. I stayed in a third camp for eight and a half months until we left Bremerhaven, Germany in May 1951. We didn’t have to pay anything, because we were sponsored by the International Refugee Organization. I wrote to my mother many times, even from Australia, but she didn’t get the letters before they were opened by the government.

I migrated to Australia on the Skaubryn in May 1951. When we boarded the ship we were lined up in a single line, trousers down, and there was doctors and nurses walking past, checking for diseases. We had to work on the ship. My job was to keep the showers and toilets clean. It was a mess on that ship. We only had a Captain, First Officer, not many engineers and in the kitchen there were only two chefs. There were roughly 1,400 of us on the ship, which was very crowded. That ship wasn’t a passenger ship. It was a converted cargo ship, especially for refugees. In the room where I was in, there were 48 of us. There were some families on the ship, but the majority were young single blokes like myself.

When we got to the camp we were given aluminium plates and two blankets. Some got packets of Aspros, some packets of Bex …

I knew nothing about Australia before I arrived. All we saw in school books in Slovenia was a map of Australia; sometimes with a kangaroo in the middle of it, sometimes an Aborigine with a spear. That’s all I knew about the country. We arrived in Melbourne on 26 June 1951 and spent the night on the ship. Next day we boarded the train to Bonegilla migrant camp where we stayed for roughly two weeks. We were again searched on arrival at Bonegilla. When we got to the camp we were given aluminium plates and two blankets. Some got packets of Aspros, some packets of Bex. We got to the barracks – five beds in there. Three had mattresses, two didn’t. I had a bed which didn’t, so I used the blankets on top of the wires. Because of this I had nothing on top of me. In June 1951 it was very cold in Bonegilla, ice outside. We slept in our clothes. I never took my clothes off all the time I was in the camp.

There were only three jobs going – cutting sugar cane, railway way out west, or the Snowy Mountains. If they thought you were good enough, they put you in the sugar cane line. We had no choice. Then we were put on a train. They gave us some bully beef in a tin and some dry biscuits. Here we were riding in this train, not knowing where we were going. We finished up at Murwillumbah [in the Tweed]. There were 13 Slovenians on that train. When we arrived it was already dark. There were beds in the barracks, cane knives, wood and water. There was no electricity. We had no blankets and it was cold down in the valley. We had to leave everything at Bonegilla – so we landed at Andy’s barracks with nothing and we had to sleep in our clothes again.

Next day the farmers organised the butcher, baker, milkman and bought all this food. There was plenty of bread, plenty of meat, plenty of everything. We ate and ate. We never had food like that for years and years. Cane cutting was hard work. The problem was before; when we left Europe we were all hard working men. But then I spent 11 months in the refugee camp. You can imagine in 11 months with only a certain amount of food and no work – you become soft as anything. Then all of a sudden, they put you in the sugar cane. We used to have blisters all over us, we used to have boils. It used to be the cane – they called it ‘Trojan’. Used to be the big, long, heavy kind and that was the worst kind to give you boils! But we survived, we didn’t complain.

Then we were working on the railway in Newcastle when the cane season finished, and were sent back to the cane cutting when the season started again and clearing scrub on the Tweed River near Nimbin and Kyogle. We were paid £20 a fortnight and had to pay for our food and things like that, so we didn’t have much left. Our two year contract ended in 1954 and I went to Melbourne and got a job with General Motors for twelve months. I lived in Albert Park.

…I met her in a cane paddock in Cudgen. I was cutting cane and she was picking peas…

I married Amelia June Slockee on 18 March 1954. I met her in a cane paddock in Cudgen. I was cutting cane and she was picking peas. I flew up from Melbourne for our wedding and we went back to Melbourne for 13 months. We came back to the Tweed; I started a banana farm at Yelgun and cutting cane. Later I got a job with Foysters Sand Works. I retired at 65 years after working on Peter Lowe’s farm in Cudgen for 12 years. We have two daughters, Kym Maria and Vicki Anne and six grandchildren and three great grandchildren too. Otherwise I don’t have any family in Australia, not even a distant cousin. I was naturalised on 20 April 1960 in Melbourne. We built the house we are living in now, in Kingscliff. You couldn’t live in a better place than the Tweed. It’s the most beautiful place in the country.

I went back four times, and did see my parents again before they died. On one of our trips back to Slovenia I visited my old home – that was 1996. Nobody lives in it now – it’s in pretty bad condition. When my father died, everything was left to my mother and when my mother made a will she divided it equally between five children. She left me the old house, but I didn’t want it so I gave it to my sisters. Well, the house is roughly 400 years old, it’s stone. When I came, all the photos were still hanging on the wall, all these things, everything’s still there. Nobody touched anything, nobody broke into the house. I was born in that house and it doesn’t matter how bad it is; it’s still something.

My mother and father used to use them. She used to prepare the food for us with those things; we used to eat from those things…

I just picked these old things from the kitchen for their memory, just to remember and I put them on the board. My mother and father used to use them. She used to prepare the food for us with those things; we used to eat from those things, you know. When I see things like that it reminds me of when I was a kid; you see, I used to watch my mother making the doughnuts, you know. They would float to the top and she would scoop them out. And that was the egg slicer – we used to watch her. My grandfather made the egg slicer, the doughnut spoon and the scraper. He was a blacksmith. That was my father’s knife for grafting the grapes and fruit trees. I was pretty sure that trip that I’m not going back again to Slovenia, so that’s why I brought all this stuff, just to remind me.